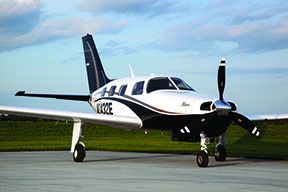 When Piper introduced the Malibu in 1984, it was a stunning success because of its high performance, tony club seating and pressurization—nose hoses were no longer required to live in the flight levels. Almost 25 years later, it decided to revise the model downward by yanking the pressurization, defying the fundamental notion that high-priced features are what buyers want.

The Matrix was, as were the Malibu and Mirage, an instant sales success, selling more than 100 during the first year to a market that everyone else had missed: high-performance piston owners who wanted a step-up, but who couldn’t afford a turboprop or felt unqualified to fly one.

As of 2012, the Matrix is in its fifth model year and although sales for all the OEMs have tanked, the Matrix and its pressurized stablemate, the Mirage, continue to be strong sellers for Piper, accounting for more than a third of its total sales by units. In 2008, the introductory year, the Matrix outsold the Mirage five to one because, dealers say, it had a substantially lower price. So much for price sensitivity.

Deflated Mirage
When Piper announced the Matrix in the fall of 2007 for the 2008 model year, we thought they had come adrift from market reality. If a buyer could afford an expensive cabin-class single, who would opt for a non-pressurized version over one with pressurization? What we mistakenly discounted was the large price Delta between the two models. In 2008, a new Mirage sold for $1.1 million against $785,000 for the Matrix.

Piper convinced dealers that it could deliver at the lower price if the volume was right. It worked. The company produced 101 Matrix aircraft the first year, but that fall, when the financial meltdown occurred, sales nosedived. Still, Piper managed to move 33 airplanes in 2009 and another 23 in the blackest recent year, 2010.

What’s the appeal? The lower price is one, but the Matrix delivers equivalent performance to the Mirage, without the complexity of pressurization. And without the weight of cabin plumbing, it has slightly better payload. Dealers and owners say it’s marginally less expensive to maintain, although we’re not sure that’s a significant draw for a buyer who can afford most of a million bucks for a new airplane.

The Matrix is essentially identical to the Mirage. It has the same fuselage and wings, the same control system and the same powerplant, a Lycoming TIO-540-AE2A at 350 HP with a pair of turbochargers. The interior is identical as well.

When the Matrix appeared in 2008, Piper was still wedded to Avidyne and the early airplanes have Entegra suites with dual Garmin GNS430s, GTX 330 transponders and an STEC 55X autopilot. The high-aspect ratio wings are equipped with optional speed brakes and the airplane needs them, because even in the non-pressurized version, it’s often asked to come down fast from on high. The boards make that practical without reducing the engine to a cylinder-chilling idle. (Even if you don’t believe in shock cooling, gentle power changes make more sense than abrupt ones.)

For the 2012 model and since 2011, the Matrix has Garmin’s G1000 avionics, with two PFDs and a central 15-inch MFD with a keypad control panel that resides in a new extension of the power pedestal. Along with the G1000 comes a GFC700 autopilot, the AP of choice these days. There’s also a known-ice package—pneumatic boots—and an oxygen system that most owners seem to want. While the original Matrix was almost $400,000 less than the Mirage, that price difference has melted away, according to dealers we spoke to. It’s now about $150,000—still less money, but less of a no-brainer decision against the Mirage. Pilot qualification and insurance may determine which way the deal goes.

Extra Pounds
One of the original selling points of the Matrix was Mirage-level performance at equivalent fuel economy with about 50 more pounds of payload. The original Matrix we flew in 2008 had an empty weight of 3071 pounds against 3121 for the 2012 model, which was equipped with air conditioning. Max gross weight is 4358 pounds for a useful load of 1236 pounds.

Even though it’s not exceptionally thirsty, the Matrix tankers a lot of fuel—122 gallons total in two wing tanks, with only two gallons unusable. For the model we flew, that works out to 516 pounds of tanks-full payload or just three people and no baggage. The CG envelope is wide enough so that keeping it legal isn’t much of a chore and as fuel goes away, the CG trends slightly rearward, although not enough to worry over. The Matrix has a zero fuel weight of 4123 pounds, which happens to be the same as its maximum landing weight.Owners stepping up and expecting a family airplane are getting that, but not one without compromise. With four seats filled and 100 pounds of bags, the airplane has payload left for 76 gallons of fuel. That’s about 3.5 hours with minimal reserve for about 650 miles of still-air range. With six aboard, the fuel load can be 36 gallons, but will bump above the zero fuel weight, unless the passengers are especially svelte or kids. And for many buyers, the pax are kids, hence the family appeal. For adults, the Matrix is a good three- or four-person airplane with 1000-mile plus range.

Cirrus owners stepping up—depending on the model—aren’t getting much of a speed bump in the Matrix. Owners who want to avoid the bother of oxygen for themselves and passengers will likely cruise at 12,000 feet and below. The Matrix is happy here and will turn in 180 to 190 knots on about 18 GPH, at what Piper calls normal cruise. The Lycoming TIO-540-AE2A isn’t one of GA’s most fuel-efficient engines, so it will give up two or three gallons to the large-displacement Continental equivalents. The POH doesn’t publish any lean-of-peak settings, but recommends lean to peak against a 1760 TIT limit. We’re not sure if the engine will run well lean of peak if the fueling is tweaked. (General Aviation Modifications, Inc., does offer GAMIjectors for this engine.)

At economy settings, fuel consumption drops to as little as 11 GPH, for a 40-knot give-up in speed. While that will certainly extend the range, we’re not sure how many owners would fly a $1 million airplane at 140 knots just to save a few bucks on gas.

If you want to drag it into the flight levels, the Matrix will take you there. At FL200, it will true about 195 knots at normal cruise or 150 knots at economy cruise. As with the Mirage and Malibu, maximum approved altitude is 25,000 feet.

Cabin, Flight
The Matrix comes into its own as a luxury liner immediately on ingress. The airstair is wide and easy to enter and the two rear seats are easily accessible. There are two baggage areas: a large one in the nose and a smaller one aft of the rear seats.  Getting into the cockpit is a squeeze, especially for tall pilots or those large of girth. But once the muscle memory is ingrained, it’s doable.

The Matrix/Mirage cockpit has come a long way in 28 years. Thanks to glass, the basic panel is free of clutter, with the G1000’s three screens dominating the panel, the gear switch in easy reach and breakers on the lower left panel and left sidewall. Since G1000 has a keyboard, Piper extended the power pedestal to provide a mounting point. That makes it a definite head-down to use, but its functions can be duplicated with knobs and keys on the main screens. The original Malibu had its primary electrical switches as rockers right on the panel, but with the Mirage and Matrix, Piper moved them to the overhead. Not the best solution, in our view, but at least they’re placed forward enough to be easily readable.

The air conditioning in the airplane we flew was welcome on a hot Florida day in August. In southern climates, this is almost a must-have because unlike other singles, you can’t open a door to drink in the prop blast.

Before you can fly a Matrix, you have to taxi it. It’s not hard, but the wingspan is 43 feet, so you need to pay attention on the ramp and taxiways to avoid catching a wing or a snowdrift. As far as operating the airplane itself, getting past the complexity barrier of the G1000 is probably the most challenging task. If you’re current on the G1000, fine. If not, bring someone who is.

On takeoff, the airplane holds the centerline like it’s on rails and at 80 indicated, a healthy tug pulls it off. Visibility over the nose is good and the airplane climbs at 700 FPM. The sight picture gives the impression of the prop being a long way forward—it is—and with the baggage between you and the engine, the cabin is quiet.

Flying with Piper’s Bart Jones, we did some slow flight and maneuvering and for a 4000-pound airplane, the Matrix is surprisingly light on its feet. The long wings make for stable, predictable slow flight, but also some breakout inertia that increases perceived roll force. Pitch feels relatively heavy for a single, but aggressive trim keeps it from being objectionable, in our view.

We climbed to 12,000 feet and found the airplane cruised a bit above book on a warmer than standard day: about 187 knots and 19 GPH. Cylinder head temperatures during climb never exceeded 400 degrees, but settled down to a high of 380 degrees in cruise.

Bart Jones told us that one thing he and owners like about the Matrix is its operating flexibility. “If I need to stay low because of the wind, I can do that. My fuel flow doesn’t change, but my airspeed does. I think I’ve got more flexibility than a turbine. Westbound in the winter in a 260-knot turbine is just painful,” Jones says. You have to stay high into the wind because flying lower will tank the range.

Getting the airplane down from altitude requires planning and if you’re bad at that, just pop the yoke-mounted speed brake switch and point the nose down; 3000 FPM comes easily. Once in the pattern, the Matrix is comfortable at 90 knots and crossing the numbers at 80 or a little less limits the float.

Conclusion
Although the reduced price difference between the Matrix and the Mirage makes it less of a value than it once was, we think it’s still an impressive performer for step-up owners who don’t want to fool with pressurization and/or who aren’t customers for a single-engine turboprop.

Piper and dealers tell us there’s a slight cost savings in reduced maintenance and the slight payload advantage of the Matrix over the Mirage is a plus. Insurance is also cheaper, especially for low-time pilots.