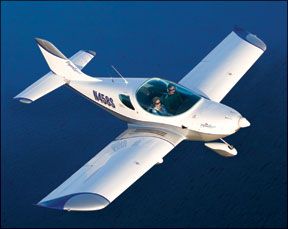 For the established manufacturers, the light sport evolution has presented an opportunity and a dilemma. The opportunity is that LSAs might gin up the market for certified aircraft by offering buyers a low cost of admission. The dilemma? How to capitalize on that. Do you leave LSAs to the upstarts or build your own?

Cessna built its own, Cirrus stuck a toe in the LSA water and withdrew it-or at least delayed the plunge-and now comes Piper with the announcement that it will offer the former Czech Aircraft Works SportCruiser as a rebranded PiperSport. The announcement came at the U.S. Sport Aviation Expo in January in Sebring, Florida.

Pipers new CEO, Kevin Gould, explained that buying and marketing someone elses design made more sense than spending hard-to-come-by developmental dollars to ultimately build an airplane thats not much different from the dozens already out there. Point taken.

The original SportCruiser was designed by American Danny Defelici, whose company, Sport Aircraft Works, is still overseeing its construction and importation. In the late 1990s, as the Soviet Bloc was collapsing, Defelici saw an opportunity to build aircraft in Eastern Europe and worked out a deal to build what became the SportCruiser.

This design is an all-metal, side-by-side-seating with a large bubble canopy hinged at the front, la the Diamond Star. Power in the Piper version is a Rotax 912UL, with a three-blade composite prop. The version we flew was an actual SportCruiser tarted up in Piper livery but, we were told, is generally representative of what Piper will ship.

Pipers Bart Jones told us the aircraft will be manufactured in the Czech Republic, assembled there and test flown. Theyll then be crated and shipped directly to dealers for final delivery. Although Piper will support the aircraft with parts supplies, the airplanes wont ship through the companys Vero Beach factory.

According to Pipers specs on the PiperSport, it will be available in three trim levels, starting at $119,000 for a steam-gauge version with a Garmin GPSMap 496, a transponder and an SL40 comm; $129,000 for a version (PiperSport LT) with a single

The airplane is unique for a couple of small baggage lockers in the wings, each with a capacity of 40 pounds. These are accessible via forward-hinged panels fastened with quick-turn fasteners. Although they would be more than capable of holding a weekends worth of clothes, they come at the expense of having fuel in the relatively unprotected leading edge of the wing. Theres also a 10-cubic foot baggage compartment behind the two seats, a split-level affair with an upper turtle deck.

And speaking of the seats, they dont slide fore and aft but as with Diamond, the rudder pedals adjust via a little trigger switch under the panel lip. This is one of the better executions of this design that weve seen and once settled into the cockpit, the ergonomics are comfortable.

With the standard LSA gross weight limit of 1320 pounds, the Piper-Sport we flew had an empty weight of about 820 pounds, for a useful load of 500 pounds. With 30 gallons of fuel aboard, that means theres 320 pounds left for people and stuff-fairly typical for an LSA. Down fuel it 10 gallons for an additional 60 pounds of payload and you still have a little less than four hours of endurance for a 400-mile still-air range.

Getting into the PiperSport requires the same practiced art

needed for the Diamond line, the Tecnam Sierra and the Gobosh 700S. In other words, it requires an awkward pirouette from the wing walks into the depths of the cabin. Fortunately, the designers realized this and provided a handy handhold on the glareshield and a beefy T-handle between the seats. Right below the T-handle is another T, for the canopy latch.

Once seated, the cabin combing is higher than you might expect, but the bubble canopy gives breathtaking visibility on the ground and in the air. But what bubble plastic giveth, it also taketh: Even on a cool January day, the cabin was hot with the canopy closed. The designers thought of that, too. A sunshade extends like a Venetian blind along the top of the canopy. It doesnt look like much, but it shades the occupants nicely.

One design intent for the SportCruiser was a spacious cabin and the airplane does have that. But so do other LSAs, including the Skycatcher and the new Tecnam P2008. Designers are listening to customers who want comfort.

Given their weight limits, ubiquitous Rotax engine and size, LSAs fly pretty much alike-except not exactly. The PiperSport turns out to be exceptionally light in pitch, but heavy in roll. Jones warned us about this on takeoff, but we still PIOd it before getting the feel in time to do an acceptable landing.

The airplane is hardly trim hungry, but it does require a deft touch on the electric-only trim buttons on the top of the stick. The stick itself is the typical European tall stalk, so you can rest your control hand on your knee and still have six inches of rubber grip above that. It could do with being shorter, in our

view, so the lazy louts among us dont have to lift a thumb for the trim button.

When we flew the SportCruiser two years ago, we found control forces light to the extent that the airplane was neutrally stable, not necessarily a good thing. In this version, the airplane still had the light control forces, but also definite positive stability, with a phugoid that damped about like any other LSA weve flown. Light elevator forces make steep turns childs play.

Clean stalls-published speed 33 MPH-come with an unmistakable buffet and a clear break. With full flaps-30 MPH-however, theres not much buffet and what there is comes near the break. We used to think that stall horns were for sissies, but recent research weve done into stall accidents convinces us otherwise. In LSAs in general, pilots will need good stall awareness training and the PiperSport is no exception.

Demo pilot Bart Jones described the PiperSport as an unsurprising, unremarkable airplane and we would agree with that assessment. Its solidly in the middle of LSA performance and handling. Its not exceptional, but no slouch, either. Cabin comfort is good, visibility is phenomenal and the avionics package is comparable to the competition, with the exception that its not nearly as customizable as offerings from, say Tecnam or Flight Designs. In our view, the PiperSport gives Piper an LSA entrant as worthy as any.