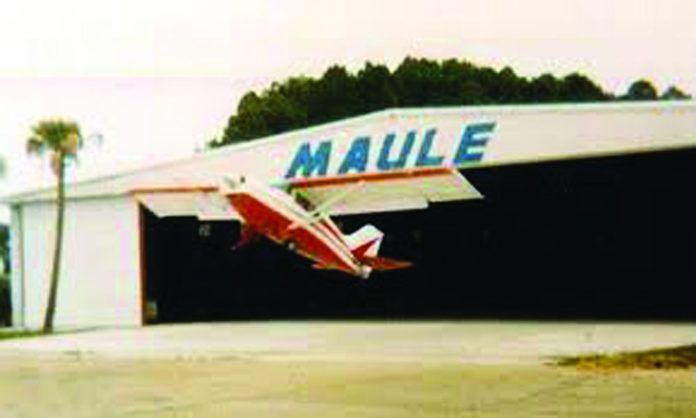 Not long after Maule founder B.D. Maule moved the company to Moultrie, Georgia, he made a number of takeoffs from inside two of the company’s hangars. He was able to break ground inside and had to stay low until flying through the door. While the hangars are more than 200 feet long, it was impressive advertising.

We’ve seen a lot of claims by manufacturers that their airplanes were super-duper STOL machines—and we have long wondered what it all means. When we looked for an official definition of Short Takeoff and Landing (STOL), the best we could find was an old Department of Defense and NATO guideline that called for such airplanes to be able to takeoff and land over a 50-foot obstacle within a total distance of 1500 feet. Although it’s not stated, we assume that’s at sea level. In reality, 1500 feet over obstructions is pretty darn short.

If the pilot involved has the requisite skill level, the Maule M-7-235C meets the 1500-feet-with-obstructions at sea level performance definition easily, as does its current production competitors, the American Champion Scout and Aviat Husky. We’ll include a popular mod—the four-place Peterson 260/King Katmai canard conversion of the Cessna 182 in the lineup. There are also a number of LSAs that meet the test without breaking a sweat, as well as several out-of-production machines such as many of the higher-powered, high-wing Piper line.

Of course, the follow-up question is the one that has been argued by pilots for decades—which of the available STOL airplanes can take off and land in the shortest distance? The answer is—drum roll—it depends.

The Maule, Katmai, Husky and Scout are in the same ballpark based on published data (there is none for the Maule) and experience. Ground roll distance at gross weight, on a hard surface, at sea level, on a standard day—per the Approved Flight Manuals from the manufacturers—for the Scout is 417 feet and for the Husky 580 feet (for reasons we can’t fathom, Aviat has put out advertising that claims a 200-foot takeoff ground roll—a third of its own test data distance). For the King Katmai mod, it’s published at 290 feet. We’ve flown all of them and think their numbers are accurate. Our experience with the M-7-235C is that a realistic distance for its gross weight takeoff roll is on the order of that of the Scout or Husky.

With that as background, we have participated in, observed and watched videos of short takeoff and landing competitions. With the airplanes involved operated at the absolute minimum weight possible, including a skinny pilot, we have seen takeoff and landing rolls (with a little wind) of Scouts, Huskies and Maules of only a few airplane lengths. Which production airplane will takeoff and land in the shortest distance on a given day is, in our opinion, a matter of weight, pilot ability and wind conditions at the moment the effort is made. All that being said, we think the Maule M-7-235C can hold its own with the best of the competition.

For operation in the real world, with passengers and baggage, we think the Maule series, Katmai series, Husky and Scout clearly qualify as STOL airplanes. In our opinion, the most important variables are pilot skill and self-discipline in operating the airplane within the design parameters set by the manufacturer (for example, Aviat calls for all crosswind takeoffs in Huskies to be made with the flaps up). We have reviewed scores of accident reports for STOL airplanes in the backcountry and note that a significant proportion of the crashes involved hitting obstructions after liftoff or on short final, or being unable to stop on the available runway. Those are pilot issues.