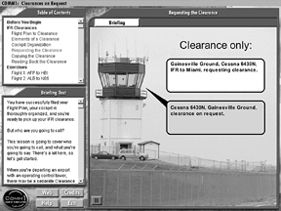 When we reviewed Comm1s radio communication training program in the March 2000 issue, we had a beef: It included only a few full-route clearance scenarios, in addition to the occasional amended clearance. Now we know why.

Far from being an oversight, the folks at Multimedia Software withheld significant clearance practice from their IFR communications training CD (which lists for $120) because they were planning to market a follow-on product called Clearances on Request.

Like the earlier product, this is a computer-based training aid of the sort thats becoming standard in the flight and even airline training realm. It has up to 10 hours of training on nothing but ATC clearances. (If that sounds like overkill, it is.) The program will run on either a Mac or a PC but the 486/66 MHz processor and 16 MB RAM specs given as a minimum is a prayer, in our view. We ran the program on a P-III/800 Mhz machine with nearly 10 times the minimum RAM and still got stuttering from time to time.

Theres no question that youll get tons of clearance practice with 100 different lessons. Aural learners likely will appreciate hearing Dudley Dulcet verbalize everything in the lefthand text window while graphics cycle on the main screen. Impatient folks can read the text and motor on.

Savvy CFIIs will need to spend time undoing the extraneous verbiage the program inculcates on readback. Just the numbers is not a concept this program can handle. In fact, it will spank you if you dont talk long enough. A clipped go ahead in response to ready to copy hangs you up on an error until you say, Bonanza so and so ready to copy clearance, or something equally prolix. Cmon guys, this is not how the real world works. Nor should it.

Another unrealistic factor is that theres nary an adenoid nor twang among the controllers populating Comm1s universe, all of whom are obviously graduates of the Professor Higgins Oak City College of Manners and Diction.

Clearance copying is geared around the CRAFT mnemonic. As you might expect from the foregoing, however, it clutters up the works with lots of suggested shorthand codes for stuff most of us generally dont bother to write down, such as ECA for entering controlled airspace.

Cost is $119.95 for the CD. (CFIIs can get $20 off by registering online.) If you have a PC and are thusly inclined, you can fork over another $25 for a headset and boom mic. (The day we checked, the website said the headset was free for orders placed through Christmas.)

We tried it, of course, but fiddling around with a headset at the PC strikes us as like putting on a crash helmet and visor to play with an F-16 simulator. If you dont have speakers, youll have to jack into the CD port, but your Walkman headset will probably do just fine.

The previously reviewed IFR communications CD wasnt bad but wed recommend a pass on this product. A C-note and change is just too pricey for the reward garnered, as we see it. The marketers claim that the additional clearance practice saves the user a directly equivalent amount of Hobbs time, which is, well, even a stretch in marketing-speak.

Although we havent checked it out, spending $10.95 for a product you can also use while driving strikes us as a better initial investment. If none of that cuts it for you and you can handle the verbiage, then move on to the high-priced spread. Multimedia Software, Inc., 113 East Church Street, Frederick, MD 21701, 1-888-333-2855, on the web at www.Comm1RadioSimulator.com

Stick Jockey
Most stick and rudder airplanes werent designed for IFR flight but are built for work in rough places where you look out the windows more than at the gauges. Still, owners do cram a stack of radios into a Husky panel, raising theIFR challenge: Where do you clip the charts, particularly the approach plates?

Enter the Stick Jockey, a lightweight package of thumbscrews, aluminum strips and Velcro that, if you arent careful, falls all over the ramp when you open the bag. Assuming you find most of the parts, as we eventually did, it takes about six minutes to assemble and clamp it to a joystick. Once there, it stays put and youre ready to, if not fly, at least make adjustments.

The Stick Jockey looks like a small pair of hedge shears opened toward the pilot. Its two flat arms provide a ledge for charts, stopwatch, or GPS. The clip at the top is for charts. GPS or clock are held by Velcro.

Its simple but a little disconcerting on a full stall landing when you yank back the stick only to encounter Edward Scissorhands tickling your navel. To avoid eviscerating yourself, we found that its wise to rotate the arms slightly to the side or just make wheel landings. To its credit, the Stick Jockey is easy to swivel out of the way or remove completely and stow.

The platforms fine for a chart but we found it a little too flimsy for hardware. The clip should be larger to hold a bound NOS booklet and youll want to find an alternate spot for the stopwatch or GPS. This is not a desktop surface but simply a device for holding small bits of paper in place within a confined space.

We recommend the Stick Jockey but with the caveat that so far nothing makes the joystick into a real IFR chart hanger. This unit is a good try and a fair buy at $29.95. Call Sky-Jockey Products at 310-276-6638 visit their website: stickjockey.com. 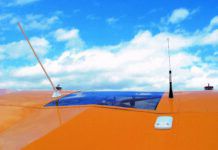