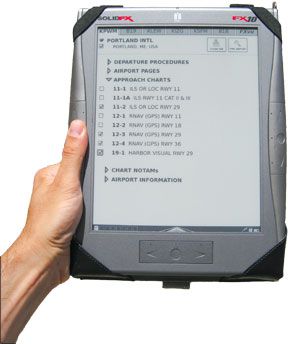 Options for digital plates abound, so long as you want government charts. Jepp users have been stuck with Jeppesens own JeppView system, which works on heavy and often cumbersome laptop computers and some EFBs. In our view (and in the opinion of several line pilots we know), JeppView has some user interface issues that make it less than ideal. It also does more than simply display charts, which is more than some folks want.

Now theres another option from SolidFX in the form of the FX10. This is another eReader (an iRex 1000), and just does charts, chart NOTAMs and airport info on a

Once you have the FXview running, selecting and organizing charts is about as self-explanatory as possible. There are seven tabs across the top of the screen. Each tab can hold the charts for one airport, except the right-most tab, which is a clipboard. More on that in a moment.

To load an airport, you tap a large “Find Airport” icon. You can tap in the ICAO identifier or any part of the airport name or town name. The FX10 narrows down the list as you type. The display is slow to update, but you dont have to wait after tapping each letter. Tap out the whole string at full speed and wait about two seconds, and the FX10 will catch up and show the results.

Once youve loaded an airport, you can check its name to make it a favorite. The list of favorites also appears on the search page for faster access.

Next to each procedure is a checkbox that will put that specific plate on the clipboard. So the standard drill might be to load your departure, destination, and useful alternates or optional fuel stops as airports into the tabs before flight. During the trip you can check just the departures or approaches youll need, and only those approaches appear on the clipboard for even quicker access.

The charts appear on the FX10 only slightly smaller than the paper Jepps and we never bothered zooming in. That said, the FX10 has the best, simplest zoom function weve seen. Use the stylus to circle or otherwise bracket the part of the chart you want to see close up, and its redrawn to show that area of the chart (after about a three-second delay). Panning is done by drawing a quick line that sets both the distance and the direction you pan, although you must make this line quite straight or the unit will zoom instead. To zoom back to full screen, tap

anywhere on the zoomed-in chart.

One bonus of this system versus some others weve seen is that chart NOTAMs also appear for each airport, so you can do a quick check of changes that arent on the chart without having to dig around the cockpit for that DUATs printout you so diligently took along with you.

The system also lets you view other documents such as PDF files or eBooks (the iRex reader that runs the FX10 software was designed for that, after all) so you can load other documents youd want to have on a trip, or just enjoy some light reading while on autopilot in cruise.

The iRex reader actually lets you write with the stylus on some PDF documents. Wed like to see the FX10 software leverage this for some kind of limited note pad. That way you could use the stylus to jot down a quick clearance change, or a phone number youll need to call on landing. The screen is large and clear enough that it just begs to show en route charts as well. Donna Flamme, President of SolidFX, say that both of these are in the works. Ideally, theyll have the entire Jepp airway manual on the device.

We werent so happy with the iRex reader SolidFX uses to display the charts. Its too heavy to hold up for long, but big enough that leaving it in your lap takes up a lot of space and might bump the yoke on some aircraft. There is no yoke or suction mount.

The iRex has buttons across the sides and bottom that can be used for control, but we found these both cumbersome and over-sensitive-you can easily hit one by accident just holding the reader. You can selectively disable buttons to prevent this, but using the stylus was much easier. But thats not perfect either. If you have the reader in one hand and the pen in the other, you must be on autopilot or keep wings level with your feet. Dropping the pen means you cant control the unit

so youll need some kind of lanyard or leash for it. This gets in the way. You must also reset the button lockout every time you start the unit.

When you call up a chart or zoom, the display change is just slow enough to make you wish it was faster. We also ended up tapping too often because we thought a tap didnt register, but it was actually just a speed issue. One plus is that when entering an airport ID or name for the search, you can tap as many letters as you want without waiting for them to register on the screen. The unit buffers them and they all appear at once.

The iRex also suffers from a universal complaint we have with these eReaders. They show black on light grey rather than black on white. While that may seem minor, it makes reading fine lines and type just that much harder-especially for presbyopic eyes.

Updating the charts is done through the same JSUM software used to update datacards for many panel-mount GPS units. The iRex connects to the computer via USB and recharges that way. When connected it appears like a drive on your system. It will connect to Macs or Windows machines, but the JSUM software is Windows only. Battery life is advertised as 10 hours and our test indicates that number is realistic.

We also wonder if given the excellent zoom capability of the software, whether the system might work better on a smaller, lighter device.

Not a Cheap Option

The FX10 reader retails for $1595, but that doesnt include the leather protective cover or extra-large SD cards to carry additional documents beyond a large chart subscription. In addition to the reader, youll need the subscription for the Jepp charts. Thats $700 annually for the entire U.S., less for selected sections of the country.

This makes the FX10 a pricey option, especially since the documentation says not to use it as your sole source of chart information. If thats so, wed like to see a provision to print backups using some PC-based app when the FX10 is connected via USB.

Walking away from the FX10, our feeling is that its not a perfect solution, but if all you want is charts, rather than a full EFB, the FX10 is much easier to use in the cockpit than a Tablet PC or laptop running JeppView. And, as long as you dont mind reading the plate while its sitting in your lap, its hands-down better than hauling around a wheeled case full of Jepp binders.