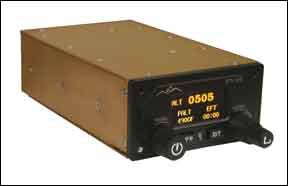 Aside from digital displays and push-button features, entry-level transponders have been slow to advance. That’s changing—since manufacturers are developing new models that save panel space, simplify installation and include advanced features as standard.

Still, transponders are one of the gotta-have systems in which owners hate to invest. For some, the year 2020 ADS-B mandate is a convenient reason to sit on the fence and wait out a transponder upgrade. While this could be smart thinking, you’ll still need traditional 1090 MHz transponder equipment in a full-up ADS-B interface. Here’s a look at entry-level models that get the job done without busting the budget. We looked at digital transponders in the $3000 price point—our idea of a budget upgrade. You’ll be pleasantly surprised that most models are forward-engineered and designed as multi-function devices. Better yet, they might offer growth potential in an evolving ADS-B world, where you’ll still need a traditional transponder.

SYSTEM ESSENTIALS
One step in a transponder upgrade is to evaluate the condition and age of the existing antenna and altitude encoding system. These supporting systems are key to transponder performance and can often short-change the interface as a whole. That’s because the transponder relies on the L-Band antenna and coaxial cabling to keep signal loss and other parameters to within a tight tolerance.

The entire transponder system is evaluated during biennial certification, which is governed by FAR 91.413. During this test, technicians are looking for specific performance characteristics to determine the overall health of the system. Ask the shop if your system barely passed or fell well within specs. Many issues related to poor performance are caused by old antennas and cabling. We advocate replacing these systems during transponder upgrades­—they’re that critical in performance and long-term reliability.

When it comes time to replace antennas and encoders, for example, don’t skimp on quality. For example, a fiberglass L-Band blade antenna will cost a bit more than a flimsy metal rod and ball antenna, but will yield better performance and offer more durability for the long term.

The same goes for altitude encoders. Our rule of thumb is to replace the encoder and the transponder at the same time. Encoder technology has improved over the years, with most current-production models requiring minimal warm-up time and infrequent calibration. Encoder swaps could add several hundred dollars to a transponder installation, but that’s changing, as manufacturers wisely integrate altitude encoding systems inside the transponder.

But even basic, entry-level transponder installations have become more complex, due to a higher level of interfacing. Be sure to budget for the extra work and down time required for connecting the transponder to a compatible GPS, the installation of optional yoke-mounted ident switches and additional switching control that’s required in a dual-transponder setup.

SANDIA STX165
We’re impressed with the Sandia line of altitude encoders, cooling fans and now, the STX165 budget transponder. Designed for tight spaces, the STX 165 is a self-contained, panel-mounted Mode-C unit that’s designed to be rear-mounted in a 3-ATI instrument cut-out. There’s also the STX165R for remote mounting. Both units have a built-in, 35,000-foot altitude encoder, which saves the installation effort of remote-mounting an encoder. The integral encoder supplies altitude data to the STX 165 for altitude reporting while also outputting pressure altitude data on an RS 232 serial data bus, for interfacing with other avionics systems that require altitude data input. Serial altitude data is a common requirement when interfacing with GPS navigators, altitude alerters, and other integrated systems, and the integrated encoder inside the STX165 makes the process seamless.

Speaking of integration, we like that the Sandia STP 78 temperature probe can be interfaced with the STX165 as an optional input, for displaying OAT, density altitude and icing alerts. The icing alert will come on at a preset temperature that is selected by the user, when configured in the user set-up mode. The STX165 has a dirt-cheap price of $1700. Sandia told us they’re working on an upgrade solution for ADS-B play.

TRIG AVIONICS
Scotland-based Trig Avionics, which sells its products through an established U.S. dealer network, including mail-order house Aircraft Spruce and Specialty, offers low-cost, Mode-S transponders. These are aimed toward LSA, experimentals and aircraft with limited electrical systems. Some models are certified to TSO C166B standards for meeting the ADS-B out specifications.

The Trig transponder family includes the TT31—a unit that can slide into a King KT76A mounting rack, utilizing some of the existing wiring. The TT31, which doesn’t use a cavity tube, outputs 240 watts, while drawing low current. It has a straight-forward and intuitive feature set that includes timer functions, altitude monitoring and a bright LCD display.
Trig says the TT21 and the TT22 models are the the smallest Mode-S transponders on the market. To afford a small footprint, the units are designed as two-piece systems, to include a control head and a remote transceiver that includes an integrated altitude encoder. The control head houses an LCD screen, with coventional rotary knobs and push-buttons. While designed for small aircraft, we think the hardware is rugged. The control heads are splash-proof, making them tough enough for water ops and open cockpit applications. Like the bigger TT31, the TT21 and 22-series have bragging rights to power efficiency—drawing low amounts of current.

Speaking of power, the TT21 outputs a measly 130 watts, making it a non-player in higher-flying aircraft. The TT22, however, outputs 250 watts, which will work in most all applications. It’s also the first certified compact transponder to comply with TSO C166b, which is the 1090E specification for the FAA’s 2020 ADS-B output requirement.

GARMIN GTX
The $2545 digital GTX327 is a popular upgrade for a wide range of aircraft. This popularity is earned, since it brings all of the modern amenities you could want in a transponder, including touch-key operation and a display that offers a trick video mode for night operations. It’s designed with a short chassis that preserves space behind the panel. Owners who’ve upgraded to the grander GTX330 Mode S unit often retain the GTS327 as a secondary backup, and it plays nicely in this configuration. Speaking of playing nicely, the remote version of the GTX327 is the GTX32. It can interface with the GTN-series touchscreen navigators for remote transponder control, saving panel space that might be required for the huge GTN750 touchscreen navigator. If you have a Garmin GNS or GTN navigator, the GTX327 complements them and furthers the automation, providing automatic timer operation and transponder-mode selection, activated by the GPS ground speed. For instance, if you start the takeoff roll and forget to switch the unit to ALT mode, a signal from the connected GPS will do it for you, once the groundspeed comes alive. Similarly, the transponder can switch back to standby on landing. The GPS groundspeed also activates a built-in flight timer, in addition to a user-controlled count-up and count-down timer, which is displayed in a data field on the right side of the screen. This data field can also be configured to display pressure altitude.

BENDIX/KING
The entry-level digital transponder in the current Bendix/King line is the KT76C. This Mode-C unit is a drop-in replacement for the venerable KT76A, making its debut when the company brought the Silver Crown Plus line of avionics to new Cessnas in the late 1990s. While the 200-watt KT76C has a digital front end, it still has a analog cavity tube—a big-bucks component that will inevitably fail. Expect this repair to reach the $1000 mark—questionable for some owners who might be looking for a model that’s more modern and that has legs for ADS-B upgrades. As noted, a TRIG TT31 might be a good replacement without having to rewire the interface. We’re waiting for the new Bendix/King to offer a fresh model that brings the reliability and performance of the rugged but dated KT76 series. Speaking of the KT76A, Bendix/King still makes it, but we think the KT76C is the better choice.

The KT76C has a bright, gas discharge display that’s easy to read in direct sunlight and includes a pressure altitude window for displaying Mode-C data. We like the units light-weight chassis and durable controls. This is a basic unit that doesn’t have serial output or integral altitude encoder.

BECKER AVIONICS
Specializing in radios for tight spaces, German manufacturer Becker Avionics offers two transponders that are priced under $3000. The entry-level ATC-4401 is a Mode-C model that’s available in two flavors, based on power output and certification criteria. The 175-watt version, with a 15,000 foot service ceiling, is $2365 while the 250-watt model is good for 50,000 and is priced at $2570. Both units fit into a 2.25-inch instrument cutout, weigh under two pounds and have a digital LCD display, automatic VFR button and an integral, on-screen bus voltage monitor. Speaking of its LCD display, we recently flew with an ATC4401 that was installed in a Husky and struggled to see the LCD display. To be fair, the unit was installed low in the instrument panel—a crummy location to mount a small LCD display. Still, the control head has rugged controls that have a positive, high-quality feel.

The entry-level Mode S unit from Becker is the $2985 BXP-6401. It’s certified for operation up to 15,000 feet and has the same footprint as the ATC-4401. Becker told us they are gearing up for ADS-B and will have a variety of products to meet the mandate.

DECISION TIME
We think anyone faced with a transponder repair that totals more than $500 should consider a whole-unit replacement. It’s tough to nail labor costs, but we favor the compact transponders that mount in instrument holes and have integrated encoders. While most entry-level encoders cost a few hundred dollars, installation can cost more than the encoder, depending on the required teardown and wiring changes. For that reason, we crown the encoder-equipped Sandia STX165 a top value, for its $1700 price point and smart design. For existing Garmin GNS navigator owners in need of a transponder, we still think the GTX327 bests in features and interface capability. If you want an approved ADS-B transponder now, Trig can deliver now, with the space-saving TT22. We’ll keep tabs on this expanding market that will likely offer more choices at lower prices.