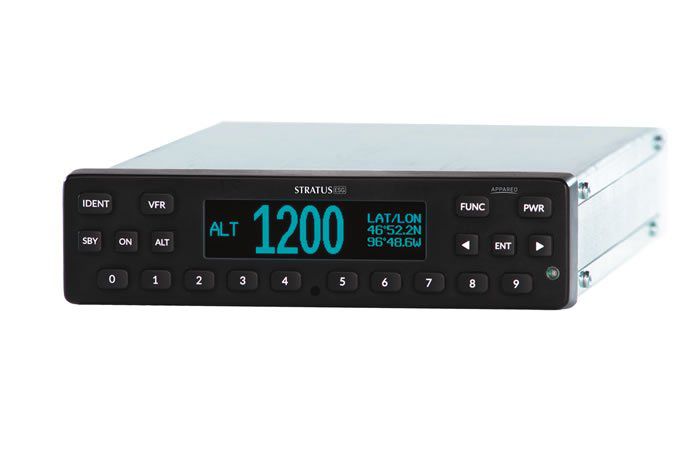 Just when we thought we could lay off the ADS-B coverage for a month, along comes no fewer than three new ADS-B product announcements—two in the same day. These product introductions come as the ink still dries on last month’s issue of Aviation Consumer, which contains an ADS-B buyer’s guide. Stay tuned. We’ll update the product guide in our June 2015 issue.

Clearly, the ADS-B market is busting at the seams, and the latest product announcements from Appareo, Sandia and FreeFlight offer overwhelmed buyers even more choices. Here’s a look at each one.

While buyers might recognize Appareo for its Stratus-series portable solutions (through its partnership with Sporty’s Pilot Shop and app maker ForeFlight), the company has been engineering a mandate-compliant, single-box solution over the course of four years.

The result of that engineering is the Stratus ESG 1090ES ADS-B transponder, which is equipped with an internal mandate-approved WAAS GPS receiver. The ESG doesn’t have an internal ADS-B receiver.

Appareo said the 2014 ADS-B equipage trend appeared to favor 1090ES transponder solutions (rather than UAT), based on the latest FAA statistics and input it received from avionics shops.

Appareo isn’t focusing on ADS-B solutions for higher-end glass cockpit aircraft, but instead recognizes the price-sensitive, lower end of the retrofit market. These are buyers that might already have a Stratus portable solution—a device the Stratus ESG transponder will complement.

The Stratus ESG is designed to fit in the location occupied by traditional rack-mounted transponders and will comes with an install kit. The transponder will require the installation of a dedicated WAAS GPS antenna, which comes standard with the installation kit. Shops will need to provide an L-Band transponder antenna, or connect to the existing one if it is in good working order.

We hoped the ESG would have an integrated altitude encoder, but it doesn’t. Instead, it accepts both Gray code and serialized pressure altitude data from most common encoders.

Appareo’s Tony Grindberg told us the focal point for the ESG transponder is a simple, low-cost installation and acknowledged there are cheaper UAT solutions. But as we’ve been reporting, it is the installation effort that soars the bottom-line pricing well north of $3000.

“Some UAT receivers are available at a lower cost than the Stratus ESG solution, but the installation will drive up the total cost of ADS-B compliance,” he correctly noted. Appareo doesn’t predict installation costs, but did say that for typical single-engine piston aircraft, its Stratus ESG transponder will require approximately half the installation time when compared to a remote UAT system.

As for the interface with the Stratus ADS-B receiver, Appareo said it is still ironing out the technical details of connecting the transponder with the portable receiver. Since the Stratus portable unit and the new ESG transponder require a GPS fix, both devices can share the same external WAAS GPS antenna signal. The Stratus receiver can also connect with the L-Band antenna, through the transponder. Additionally, the portable can be powered off the transponder, eliminating the need to plug it into an auxiliary power port.

This is a wired interface which will require some kind of plug-in harness or panel plug to join the two devices. It can also enable mounting the portable receiver in a glove box or other convenient location, rather than placing it on top of the glareshield.

The ESG has a LED display and has traditional transponder functionality, in addition to an automatic squawk-VFR button.

Sandia actually labels the STX360 and STX180 products UAT ADS-B receivers, which happen to have a built-in Mode C transponder. The internal UAT ADS-B receivers enables reception of both 978 MHz traffic targets and FIS-B METAR weather data, which are displayed on the unit’s OLED screen.

The STX360 also has a wireless output for interfacing ADS-B data on tablet computers, although Sandia hasn’t finalized a list of compatible apps. There is also a remote version, the STX180, for interface on EFIS systems, plus an option for operating the unit with a 2.25-inch control head.

The STX360/180 doesn’t have internal WAAS GPS, but Sandia said it is planning on a future GPS option. The transponders are expected to be available in 2016 and priced below $3500.

Another announcement comes from FreeFlight Systems, which includes the FDL-978-TXL RANGR Lite, a stripped-down version of its RANGR ADS-B system. With a list price of $1995, the system counters L-3 Aviation’s $2521 NGT-1000 entry-level UAT ADS-B system, making the FDL-978-TXL the lowest priced UAT solution on the market.

Incidentally, in an interview with sister publication AVweb.com, FreeFlight’s CEO Tim Taylor said it is unlikely that prices will drop much lower than we’re seeing now.

“We’re already a long way down the curve and have been building and selling ADS-B systems by the thousands, but that curve is flattening out. I don’t see economy-of-scale in the future making this any less expensive,” he said.

FreeFlight’s RANGR Lite is part of its Equip-It 2020 program, and is committed to build 10,000 systems.

In addition to the basic UAT Out transmitter, FreeFlight’s Equip-It 2020 solution also includes the $3695 FDL-978-XVRL—a version of the Lite that includes ADS-B In.

Both systems come complete with integral WAAS GPS and include the required GPS and ADS-B antennas, installation kit, remote ADS-B control unit (for installations that include legacy, analog transponders).

It’s worth noting that L-3 Aviation’s low-cost solution doesn’t come standard with antennas or the control panel. These hardware costs are absorbed during installation.

FreeFlight said the FDL-978-XVRL also comes with a serial WiFi module for playing ADS-B weather and traffic data on tablet computers. The interface is compatible with the Wing X Pro app for iOS, iFly GPS for iPad, Android and the iFly 720/740 GPS, in addition to FreeFlight’s own dedicated tablet app, ADS-B View.

When venturing on an ADS-B upgrade, it’s important to consider the health and vintage of the existing transponder system. That includes the altitude encoder, the wiring and the antenna system. Remember, you’ll still need a healthy Mode A/C transponder, plus ADS-B.

This is where you’ll need the advice from a trusted shop. They’ll know if the existing transponder system is a keeper or a loser. Its condition could be a deciding factor in which ADS-B solution you install.

Look hard at the numbers. If you have to replace an aged transponder and altitude encoder, you’ll likely spend $3500 for any of the modern Mode A/C models currently on the market. We’ll take a look at that market in a future issue.

For now, the sweet spot for basic ADS-B upgrades is $3500-$4000, after installation. That includes the current price-leader, FreeFlight’s $2000 RANGR Lite.

While we’re cautious about proclaiming a developmental product a winner, we think Appareo’s WAAS-equipped transponder is a smart solution (L3 Aviation’s NGT9000 ADS-B solution has transponder functions, ADS-B In and internal GPS, but it’s twice the cost).

With an internal GPS, a palatable price (although it isn’t a price breakthrough) and its interface with the Stratus receiver, we think the Stratus ESG fills a void. In particular, this is non-glass, aging aircraft in need of a transponder upgrade and ADS-B.