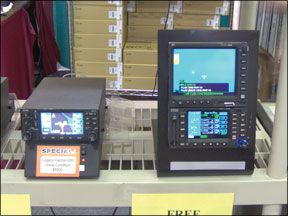 There are two good reasons to look at used avionics. One is that a trusty component of your panel has finally spun its last electron. The other is that youve been wanting to step up-maybe this IFR GPS thing really is gonna stick around-but the cost of new has kept better technology out of reach. Either way, there are good options for the bargain hunter who doesnt have to fly with the latest and greatest.

The way to keep that smile on your face months after a used avionics purchase is to honestly tally the cost and risk for all your options. Factors that go into this decision are the cost of a refurbished unit vs. a used one, the reputation or warranty from the seller, viability of support for the aging box, and the cost of installation. The logic is basically the same with any piece of avionics, so well start with the top of the stack: the audio panel.

Problem radios are sometimes a problem audio panel. With new options in digital audio panels that support seven kinds of in-flight entertainment, more pedestrian models are available on the cheap.

The market is flooded with used Bendix/King KMA 24s. Prices seem to vary wildly, but weve seen them from reputable sellers for under $300. (Note that the KMA 24 has no intercom.) Considering a new KMA 24 can be $1300 or more, thats a substantial savings.

But take this all in context. If you have a dead KMA 24 youre just trying to replace, the cost with an exchange could be $350. A refurbished unit without an exchange could be only $575 and come with a warranty. So you need to ask yourself if savings on the used item outweigh any risk of a straight, used unit that hasnt been looked at in detail. In fact, if youre planning on buying used, check

with your install shop to see what they will demand before they install it. Most will want it inspected, which they can often do themselves, or want an 8130-3 (Airworthiness Approval) form. Dont be awed by something thats “yellow-tagged,” as it means little. The 8130-3 is the governing FAA paperwork to an avionics shop. Some shops may also want a new install kit, so getting all the install wiring with your purchase might not turn out to be such a screaming deal.

The takeaway here is to start your used purchase by talking to the shop thats going to install the unit and make sure you really want used, and that you buy what you really need. Youll also want that shop contact to ask questions when youre not sure. Imagine you cant find a KMA 24 but theres this KMA 20 that looks great. Then your shop tells you that the KMA 20s and Collins AMR350s had poor audio quality and you should look elsewhere.

While were talking audio, you should be able to score a PS Engineering PM1000-series four-place intercom (which can be wired for two places) for $150 or less used. It has an entertainment input and is voice activated. Avoid old units like the David Clark Isocom and Sigtronics models that may have lived hard lives in rental aircraft.

The industry-standard King KX 155 is a good bet for a used Nav/Comm. There are

plenty out there and several were pulled from service because they were rendered superfluous by a combination GPS/Nav/Comm.

That said, you need to be careful. If the display fails, those gas-discharge assemblies cost well over $200 to replace. Display lenses damaged by the sun arent cheap, either. You must also get the right voltage for your aircraft. If your aircraft has a glideslope head (KI209 or KI204) for the unit, get a KX 155 that has a glideslope board. These usually cost $500 more used but adding a glideslope to a unit is $1500. A clean KX 155 with glideslope should sell for less than $2500, but the range is huge. Weve seen used KX 155s for sale for $1500 or less. One (without a GS) even included the KI 208 CDI head. But these were without any warrants. You may also see the KX 165, which is like a KX 155 but has a VOR/LOC converter built in and a digital bearing readout to or from the station and can drive some digital CDIs and HSIs.

If you can find a deal on a used Garmin SL30 nav/com or SL40 Comm, go for it. They are great, all-digital radios. The MD200 is a high-quality CDI head made by

Mid Continent Instruments that works with these systems. In researching this article, we found exactly one on eBay. It went for $2452. Street prices for new ones run just under $4000. iCOMs A200 comm transceiver is a good radio, and weve seen them for under $900 new on eBay. This is better than the King KY97A, which goes for almost twice that new and somewhere north of $1200 used. Both units are comm only and have LCD displays, but the iCOM seems brighter with a better viewing angle.

Dont even think about buying and installing an old Cessna radio. We havent been happy with the quality weve seen for the slide-in Cessna radio replacements, either. Buy something better. Used Narco MK-12Ds can be had for around $1700, but parts have been an issue for them in the past. If you do go that route, be sure it has a glideslope receiver if you need one and is in the right voltage range.

used. Thats compared to $4000 new. The approach-legal KLN 90B has an unconventional interface, but its still fully supported and can be had used for $1000 or less. The catch with IFR GPS is that the installations arent cheap. Required remote indicators and labor could tack $3500 onto the final invoice.

Theory says there should be plenty of used Garmin GNS 430s out there, but practice says otherwise. Used units are selling for north of $5000. Some buyers see the $8000 price tag for a new 430W and try buying used and upgrading. But the upgrade is now $2500, so theres no real gain there.

If you can find a CNX 80/Garmin GNS 480 for a reasonable cost, you could get it updated and have a great buy. Garmin is still supporting these WAAS boxes and people who own them tend to rave. The Apollo GX line is getting old and support is becoming an issue. The other problem with older GPSs is their datacards may be too small for the ever-growing GPS database. We know an owner who got a screaming deal on an approach-legal Trimble 1000, only to find that he cant buy a subscription to use it for approaches because its datacard is too small.

A final oddity were seeing is a return to installing ADFs. You can get an entire KR87-based system for $2000 and it can be handy to have (if youre going to Canada). You can also get a KN64 DME for $1300 or less to add some IFR utility without needed to keep up a database subscription.

Weve seen some great deals on King KMD 550s. This could be a terrific upgrade, especially if you have a King GPS to link to it. Traffic, terrain and weather overlays are available as well. The trick would be finding one used.

Be aware that a used Apollo MX20 is not the same thing as the modern Garmin GMX 200. The MX20 is still a good unit, but it has a slower processor, different display and cant paint datalink weather on the map page (it does have a dedicated weather page). Used MX20s seem to fetch $3000, so they arent cheap for an out-of-production unit. If it doesnt have ChartView software for on-screen approach plates youll need to spend another two grand for the software, if you want it. Avidyne MFDs could be a good deal, but avoid the Flightmax 450 as its no longer supported and cant play datalink weather or approach charts.

With any MFD, be sure it will play well with your existing avionics or the display you plan to buy at the same time. Working with a shop you trust is critical here.

Used transponders are rarely a good deal. You could get a great buy on a used unit only to have its power cavity tube fail the next day. Thats a $600 part. Even modern units like the King KT76A and KT76C still use a cavity tube. Considering an entire used KT76A costs $700, you essentially blew the entire investment.

If you can find a used Garmin transponder, that could be a good deal as they are entirely solid state (even the GTX 320, which has traditional knobs for tuning). But

expect to pay twice as much for one of these as a comparable used King unit. Dont waste your time with old Narco AT50s, Collins TDR950s and old King KT78s.

Narco has a line of new transponders they are aggressively marketing that look promising. You might want to try new here, rather than taking the risk.

A rare but great find could be a WX950 Stormscope ($4000 or thereabouts is a good value). A WX500, of course, is best if you do have a MFD display, but what few deals are out there probably were pulled from a salvaged airplane. The WX1000 is a heavy system for the display, processor and antenna. A SF2000 StrikeFinder might be a find, but there were issues with older antennas so get a knowledgeable shop on board. A WX7, 8, 9, 10 or 11? Boat anchors.

Your Shop, Your Friend

As one of our avionics experts put it, “A good shop wont have any problem cooking your eggs for you. Theyll work with what youve got.” But youve got to get them on board early to make it all work out. You need someone to talk you out of that really great deal you got on a used LORAN.