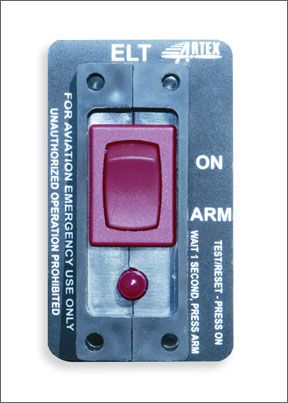 gency locator transmitters are the least fun-to-buy avionics, second maybe to transponders. Mechanics and avionics shops regard the ELT system as a nuisance to maintain, while owners cringe at spending money on ELT repairs and maintenance.

We felt the same until we found ourselves roaming around a dense cornfield one night while our airplane lay smashed on its back after suffering an engine failure. As rescue aircraft homed in on our activated ELT signal, we had a change of heart, realizing that ELTs serve a valuable purpose.

If youve ignored the ELT market lately, youll be surprised to find that ELTs have become pricey with the planned 2009 termination of the 121.5 MHz beacon satellite support. Moreover, if, by February 1, 2009, your aircraft still has a 121.5 MHz ELT and you crash in the sticks, dont expect help in a hurry unless your crash site is within range of a listening control tower. The follow-on technology is the 406 MHz system, with ELTs now becoming available.

When a 121.5 MHz beacon activates, it transmits a continuous swept tone until the battery is spent. Neglected batteries might shave that time in half. The more sophisticated 406 MHz digital pulse transmits at 50-second intervals for 24 hours and transmits pre-programmed, digitally encoded data such as aircraft tail number and beacon serial number, plus country of origin and aircraft serial number. Think of it as a personalized dispatch for low-earth orbit and geosynchronous orbit COSPAS-SARSAT satellite processing. A 406 MHz hit has an alert time of under five minutes with a single detection by a geosynchronous satellite. The waiting time for a LEO-satellite-based 121.5 MHz detection hit could be 45 minutes or more.

Improved 406 MHz beacons have been available for a while, but the market is hardly hot. Despite advances, 406 MHz technology hasnt caught fire in light aircraft GA because of the higher cost. This is hardly a shocker. But the industry is buzzing about new low-cost 406 MHz models that are about to hit the market.

Artex Aircraft Supplies in Oregon, a key player in 121.5 MHz beacons, is also emerging as a leader in 406 MHz technology. The C406 series ELTs are third-generation systems that have been the only 406 MHz systems within price reach of most owners. Were not talking about a $200 beacon, but a couple of grand for the C406 with optional ELT/NAV interface for copying latitude and longitude coordinates from an onboard GPS system. While this is precise position reporting, streaming the same 24-bit address protocol as a Mode-S transponder, owners of light aircraft just dont have this pricey technology in their budgets.

But with the 2009 121.5 MHz phase-out moving closer, Artex sees the need for affordable 406 MHz beacons with their new model ME-406 ELT system. The ME-406 is certified under TSO C126, which represents the new 406 MHz ELT spec. Its approved by COSPAS-SARSAT standard and is available now, for $998. The ME-406 is an automatic fixed-type beacon and weighs two pounds. Its aimed directly at common general aviation aircraft.

One thing we like about the ME-406 is that it still incorporates 121.5 MHz output through a single antenna. In our view, distress pulses on 121.5 MHz will remain an effective way to pinpoint wrecks through local rescue search team efforts. The 406 MHz frequency will simply get the search started more quickly and pointed in the right direction.

A “smart” ELT, the ME-406 is custom pre-programmed during manufacture using a short message format with specific user data: Serial number, aircraft tail number, 24-bit aircraft address and aircraft operator designator personalizes the beacons output to the operator. The ME-406 wont support location protocols-GPS-and it isnt approved in Canada. Still, the ME-406 series sets a lower-price standard for a complete beacon package kit. Artex offers the ME-406 HM for helicopters. This model has five auxiliary G-switches for activating in six axes.

Automatic activation occurs when the crash sensor G-switch is triggered by a 4.5 feet-per-second deceleration. The ME-406 can also be activated with a cockpit-mounted remote switch or by throwing the switch on the ELT body. A standard swept tone is transmitted on 121.5 MHz and on 406 MHz, the programmed aircraft and beacon identification is transmitted for 24 hours, at 50-second intervals.

The ELT measures 6.6 by 3.7 by 2.9 inches and has a mounting hole configuration that should be compatible with most ELT housings. The ELT assembly is secured in a mounting tray and uses a 15-pin D-Sub connector to interface with the remote switch. The battery pack is two D-size lithium cells mounted in a case cover assembly. The batteries can easily be replaced in the field. Battery life is rated for five years or one hour of activation.

The ME-406 is microprocessor controlled with automatic self-testing and interactive visual and audible error codes. Theres a LED status annunciator on the case of the ELT above the connector assembly. After examining one, we think the ME-406 has a high-quality feel and is about as exciting as an ELT gets.

Theres no off position for the ME-406 beacon-some beacons with off switches can inadvertently be switched off during maintenance. Instead, a jumper is installed between contact pins during wiring, which, when energized, allows the G-switch to activate the beacon. Arming the beacon is as easy as sliding it into its mounting tray and connector. This is smart engineering, since it eliminates the chance of false activation during handling. Hang around any maintenance hangar for long enough and youll likely witness a search effort for a bogus ELT activation.

A ME-406 system comes standard with a whip-style ELT antenna, rated for 200 knots IAS and for fixed wing reciprocating aircraft. The antenna is installed on top of the fuselage and the cable is connected to the ELT with a common BNC connector. As with most antennas, the ELT whip should be installed using a proper doubler or skin backing plate using proper grounding. Care should be taken to not place the antenna too close to tail sections, props or other antennas to avoid shadowing.

Larger and faster aircraft require beefier antennas offered by Artex and several aftermarket manufacturers. Hang a high-speed ELT stick on a pressurized vessel and you could be into thousands of dollars in engineering approvals. Some ELT antennas have proven somewhat playful. We recall a single-engine Piper that went through three ELT rod antennas in a year. The antenna lived in a stressful, twirling slipstream, which snapped the metal rod at the base of the antenna.

A drop-in retrofit version of the ME-406 is the ME-406 ACE version, which Artex calls Absolute Cost Efficiency for reducing installation costs of a 406 MHz changeover. The ME-406ACE can be dropped into an existing ACK or Ameri-King ELT installation. If replacing an ACK ELT, the new Artex remote switch will replace the old one in form, fit and function, eliminating the need to modify the existing remote switch mounting scheme.

Replacing the Ameri-King remote switch requires minor modification of the mount. In either case, the remote switch doesnt rely on ships power for operations but on the beacons battery instead. Eliminating the need to remove the aircraft interior to route new control wiring is a mighty savings in labor time and money.

List price of the ME-406 ME is $1148, which is reasonable, in our view. Weve tended to snub our noses at slide-in avionics that use existing old wiring, so be sure your shop gives the old installation a hard look. On average, an entirely new ELT install could cost $500 to $800, but more if antenna work is needed.

Edmo Distributors told us that a surge of new 406 MHz beacons is expected to hit the market this year and several ELT manufacturers await TSO approval on new cost-effective 406 MHz models. From France-based Martec Beacons and Instrument Systems is the KANNAD 406 AF. They say theyll offer a new generation of 406 MHz units at a price thats slightly higher than of that of conventional two-frequency ELTs. Martecs product literature focuses on turboprops, Boeing airliners and single-engine pistons, too. Pricing for the 406 AF promises to be about $1000.

Both ACK Technologies and Ameri-King are reported to be working on 406 MHz models approved for installation. Until then, the ACK E-01 and Ameri-King AK-450 121.5/243.0 MHz models are still available or can be easily, if not cheaply, replaced by the 406 MHz Artex ME-406 ACE.

Weve received a number of queries from readers seeking advice on ELT upgrades. Theres some confusion about legalities governing ELT use in aircraft. FAR 91.207 covers the requirement for on-board emergency locator transmitters and its worth a read. There is no current law that says you must have a 406 MHz beacon.

If you dont have one after February 1, 2009, theres no doubt that rescue response will be slower, if it comes at all. Our advice is that if your aircraft needs a replacement ELT because the 121.5 MHz beacon has failed, bite the bullet and consider the Artex ME-406. We think its a solid design and represents a good value in performance with the benefits of 406 MHz technology.

If your existing 121.5 MHz beacon is in good order, we think it makes more sense to wait for a few more market entrants later this year, at which point well do a follow-up review on 406 MHz models. Prices may become more competitive. But if youre paranoid that your airplane will leave you stranded in the backwoods, $1000 isnt much to spend for an upgrade to a new 406 MHz unit now.