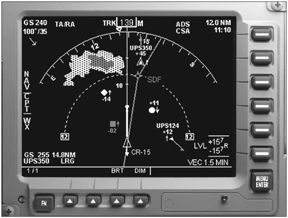 A skinflint Bonanza owner we know recently pulled us up short with this question: Why pay XM Radio and WSI for weather in the cockpit when you can get it for free through the FAAs emerging ADS-B datalink system?

Good question. It merits another in reply: How long are you willing to wait? ADS-B has been in the breadboard stage for most of the past two decades, it works, everyone thinks its a terrific idea and, essentially, it doesnt exist. Or at least it doesnt exist to the extent that a buyer can make an intelligent purchase decision. Heres the story so far.

Background
The details of ADS-B-short for automatic dependent surveillance-broadcast-can be found at this Web address: www.ads-b.com. Its worth a detailed read. In a nutshell, ADS-B is the FAAs long- term replacement for the current radar system used for separation of IFR traffic. Rather than radar, it relies on individual aircraft reporting GPS-derived position via 978 MHz radio links to ground stations, data thats compiled for display in an air traffic control facility, just as radar does now.

ADS-B can communicate directly with nearby like-equipped aircraft and display their relative position to the host aircraft. Think of it as like having an ATC radar scope right in your cockpit, opening up the heady concept of self-separation or at least providing terrific anti-collision capability. (Never mind that there are only enough ADS-B equipped airplanes to stuff the ramp of a good-sized country airpark.)

The B part of ADS-B is the juiciest plum. FIS-B, for flight information service, provides datalinked weather while TIS-B-traffic information service-feeds the traffic display from data compiled both by ground-based radar and the evolving ADS-B network. Currently, FIS-B provides NEXRAD imagery, graphic METARs and text weather. As the system matures, it will see the addition of more weather products, all free of charge, at least so far.

At the moment, TIS-B relies largely on information from ground-based radar to give the pilot a traffic picture that includes more information about nearby aircraft than current traffic systems do. As ADS-B develops and like-equipped aircraft multiply, this capability will improve. Going forward, however, ADS-B is dependent on ground sites called GBTs or ground-based transceivers. More on that in later.

Hardware
Before it was gobbled up by Garmin, the then UPSAT bet a sizable piece of its farm on ADS-B, developing the universal access transceiver that has morphed into the Garmin GDL90, a genuine, certified you-can-buy-it-now ADS-B system.Its the only hardware available and given the fact that theres not much you can do with ADS-B at the moment, we dont expect to see much competition.

As datalink goes, the GDL90 is on the expensive side, retailing for $7795, a price that includes a couple of antennas for the top and bottom of the airplane and a built-in WAAS-capable GPS. It does not include any kind of display which, for now, is limited to the Garmin MX20 multifunction display.As we go press this month, we learned that Garmin sees a GDL90 interface for the 400 and 500 series navigator as feasible but no delivery dates are promised.

This could be a potential game changer, since many buyers who might like the idea of ADS-B will balk at buying an $8000 display if they already have a GNS530 in the panel. Its a nice bit of scene setting by Garmin but still a risk because ADS-B is by no means a done deal within a time frame approaching the buying horizon of many owners.

All Dressed Up…
ADS-B-and specifically the GDL90 technology-is one of the most tested concepts ever to be placed before a potential avionics buyer. To prove the system, the FAA funded an experimental project in Alaska called Capstone.Because it has limited radar coverage, Alaska proved the ideal venue. By building enough relatively inexpensive ground stations around the state and paying to equip about 150 airplanes in Alaska, the FAA has proven that in the long term, ADS-B can replace expensive ground-based radar networks while providing pilots with more services. The Capstone project is actually being used to separate airplanes in Alaska.

Its a nice deal if you happen to live in Alaska and the FAA paid your avionics tab, but what about the rest of the country? Thus far, ground coverage for ADS-B has been sharply limited. But recently, the FAA funded a number of GBT sites along the east coast, providing nearly seamless coverage from Florida into the northeast. A service gap along the Georgia/South Carolina coastline was expected to be closed this summer. There are a handful of stations elsewhere in the U.S. and some states are showing interest in funding GBTs, but the bottom line is this: If you fly outside those areas, ADS-B traffic and weather isnt available; the expensive UAT box will be so much electrical-consuming dead weight.

But where it works, it works well. We recently flew with Tom Teetor in his ADS-B-equipped Cessna 210. Based at Fort Myers, Florida, Teetor can receive a ground station in Lakeland, Florida once he reaches about 3500 feet. He reports that coverage in northern Florida is virtually seamless and a trip from Florida to Washington is the equivalent of ADS-B Disneyland. One shortcoming of ADS-B is that for the short term, unlike satellite-based weather datalink, it cant always be received on the ground before takeoff.

Chicken and Egg
ADS-B acolytes insist that the handwriting is on the wall: The system is coming and will eventually replace or the FAAs ground-based radar. The FAA has said as much in its long-term planning documents-the Administrators Flight Plan, for instance-but the harsh truth is that ADS-B has not been funded and no one knows when it will be.

As with GPS eventually replacing the ground-based VOR system, theres a chicken-and-egg aspect to ADS-B. For it to work to its full potential, every airplane has to be equipped, rendering ground ATC radar redundant. But before aircraft owners will buy it, the FAA has to build the ground network. There is movement. Maybe. The FAA this summer was scheduled to again review its plans on future ATC systems and make a decision on the next build-out phase of ADS-B, which may include ground stations in more densely populated areas of the country away from the coasts. But thus far, theres no schedule on any of this. Although everyone likes ADS-B, no ones marking dates on calendars.

Randy Kenagy, who follows FAA technology developments for AOPA, told us the association supports ADS-B and sees clear benefits. Kenagy see an inevitability to ADS-B. I dont anticipate any changes in direction away from it because its in the strategic plan, he says.

On the other hand, AOPA opposes a mandate that sets a date requiring owners to equip with ADS-B, due to the onerous expenses involved. Although it hasnt openly said as much, a mandate would certainly be welcomed by the FAA, since it would hasten the conversion from ground-based radar ATC to dependent surveillance, a cheaper and potentially better system.

Buying Strategy
In a world defined by such fuzzy edges, can an owner make an intelligent long-term avionics buying decision? In a word, no. Despite the soundness of the concept, ADS-B is still pie-in-the-sky for most owners.

But it may make sense for some and its worth watching for others. If you live and fly only on the U.S. east coast, ADS-B coverage is complete enough to count on most of the time, but for now, it fades away if you venture 200 miles inland. Garmins GDL 90 will cost about $8000 to install if you already have an MX20, twice that if you have to add the display. Garmins plan to make the GDL90 playable on 400/500 series navigators changes the cost equation but doesnt help the coverage shortfall.

We dont think it makes sense to invest in ADS-B just yet. The cost of entry is higher than that of satellite-based weather systems and although you get some traffic information and free weather, limited coverage and little ground-based coverage make it a poor value. The FAA has to do its bit to expand the network. If it does, well take another look.