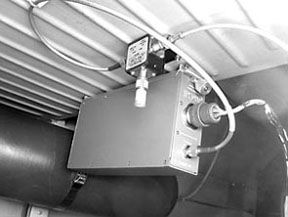 Although it sounds like a good idea, the companies pedaling airborne phone service to the small aircraft set may be discovering a dirty little secret. Some owners are merely using their standard terrestrial cellphones for the odd call and giving a dedicated airborne cell system a pass.

Ignoring the legality of this for a moment, it doesnt bode well for the future of such companies as AirCell and even Iridium, which recently returned from the dead.

Nonetheless, if you need regular phone service in the cockpit and dont want to bootleg with a standard phone, the choices are both expensive and limited. With datalink via satellite on the horizon, its not clear if a cellphone is the best way to uplink weather or e-mail to cockpit, either.

AirCell
As we reported two years ago, AirCell is the leading contender for conventional ground-based cell service for small aircraft. When we tried this system, we found that it worked fine, even though the network hadnt been completed.

As of spring 2002, however, AirCell reports that virtually the entire country is covered by its 134 or so antenna sites, which process the airborne calls and route them into the terrestrial phone network. A total of 150 sites are planned. However, coverage is complete only at 18,000 feet or higher. Below that, coverage is less complete and is often terrain dependent.

AirCell sells four dedicated boxes for its airborne cell service. The AT.02, which processes only airborne calls to the cockpit handset and the AGT.02, which sells for $11,739, is the top of the line and includes handsets, antenna and other necessary hardware. The AT.02 costs $10,239 and is the same as the AGT.02, but allows only air operation, no ground ops.

For space challenged GA cockpits, AirCells Guardian 1000 is a compact, panel-mount unit costing $3495. It ties into the aircraft audio panel and has a battery back-up system so in the event of an electrical failure, it can serve as emergency comm. The DataComm 500 sells for $1995 and provides only data capability, no voice.

Garmins airborne phone, the NavTalk Pilot, cleverly combines a modest moving map GPS with a compact cellphone. The NavTalk Pilot sells for $2990, a price which includes the necessary AirCell transceiver to make it work.

Iridium
Motorola made a huge splash four years ago with a bold plan to construct a satellite-based phone system called Iridium and composed of 66 or more low-earth orbit satellites. In a stunning reversal, the vastly expensive system went bust, the victim of a business plan that didnt foresee the wide build-out of ground-based cell service offering cheap rates.

But the government saw military potential and bailed out the system with a guaranteed purchase of minimum service. Motorola sold off the venture to a new company that now offers phone service that operates anywhere on the globe for a moderately priced buy-in and a rate of $1.50 a minute, plus $20 a month for service.

An Iridium phone costs a reasonable $1495 and for an additional $4495, Icarus Instruments sells an aircraft kit that includes a TSOd antenna, wiring, yoke mount and an adapter box to marry the phone to your headset.

When you arrive at your remote island getaway in the Bahamas, merely snap the phone out of the cradle and take it with you and you have standard Iridium service.

Iridium is also suitable for data transmission and the company provides a proprietary compression software that automatically compresses the data at the transmission end and expands it in your laptop at the other end.

This effectively turns a 2400-baud connection to about a 10K baud connection. Not exactly a T-1, but acceptable for retrieving the occasional weather map.

Bendix/King also has an Iridium-based system, the Airsat 1. It sells for $23,270 and offers services similar to the basic Iridium phone based on $1.50 a minute.

Unlike the AirCell system, MagnaStar can be crosslinked to digital satcomm or HF systems to provide service when the aircraft is out of reach of the ground-based sites. MagnaStar also offers dedicated airborne datalink services, independent of the voice system.

That these products are aimed at the biz jet market should be obvious from the prices. We mention them merely for informational purposes so youll know how the other half lives. We should also note that despite repeated calls to Teledyne Control for information and pricing on the MagnaStar system, the company took two weeks to call back. Our view is that if the sales force isnt interested, why should a customer be. Give them a pass.

Recommendation
Were not sure we can make one. None of these systems strike us as knock-down great deals. AirCell is affordable but the coverage at low altitude will be a problem and it wont always work on the ground. In any case, youd still have to invest in the more expensive dual ground/air mode equipment.

The Iridium system is more expensive at the low end but includes air, ground and walkaround operation, a plus. Its also a relatively easy install. If you need voice phone, it may be the quickest way to get there, if not the cheapest.

If datalink is your main area of interest in having a cellphone, it might be better to wait before buying. The datalink market is still chaotic and unresolved and thus far, we see no clear winner on price or value.

Even in the cellphone arena, we suspect big changes are afoot that will see some of the products in this review dropped if, indeed, entire companies dont disappear. We dont think the long-term airborne phone solution for the little guy has emerged just yet so dont be in a hurry to buy a system that could be obsolete before you get the first bill.