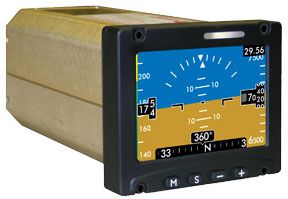 Several years ago, the most popular add-on during major avionics upgrades was an electric attitude gyro. Paranoid owners who dreaded vacuum failure bet their lives-or at least a couple of grand-on electrically-driven steam gauge horizons for backup.

But in a full-glass suite like the G1000 or Entegra, a steam gauge seems so old school. The mini glass backup instruments you see in transport-category aircraft

are trickling down to Part 23 aircraft.

Currently, two manufacturers have approved products: L-3 Avionics with the pricey Trilogy Electronic Standby Instrument system, and Kelly Manufacturing with the RC Allen with the more basic, and cheaper, 2600 electronic horizon. These units are opposite ends of the market.

L-3 Avionics (and former BF Good-rich) boasts a proven track record for extremely reliable electric, analog instruments. You find them in high-end business jets and in airliners, too. The ESI-1000 integrated standby system follows in high-end L-3 tradition. Its an impressive instrument with an impressive price of $15,000.

Despite the heavy price tag, Trilogy is generating lots of intrigue among glass cockpit owners. Trilogy can back up a big-screen PFD or old-school steam gauges, and has multiple TSO approvals applicable to various flight-instrument functionality including Airspeed, Attitude, Altimetry, Heading and Multi Purpose Display.

The standalone unit weighs less than three pounds and has a 3-ATI chassis with a front bezel that measures 4.03 inches by 3.35 inches. The system takes aircraft pitot and static pressure through two ports located on the back, and has an integrated air-data computer and solid-state attitude sensor. Theres a single electrical interface connector for a straight-forward installation.

While the unit can fit in the lower subpanel (the area you often find backup steam-gauges in glass-cockpit aircraft), the installation manual and STC with Approved Model List requires placement within the pilots normal field of view. We think pilots would want the unit front and center anyway, because the display is easy on the eyes and capable of primary navigation (See sidebar). Plus, the intent is using it for primary reference when the big glass goes dark.

The display is an auto-dimming (through a bezel-mounted photocell), 3.7-inch, color LCD with a 160 x 120 pixel resolution. L-3 told us the system is completely flicker-free since the processor has a 60 Hz refresh rate. One of the complaints weve heard from Aspen EFD1000 owners is a flicker in the display that contributes to eye fatigue.

There are four softkey buttons contained on the bottom of the Trilogy bezel that access various functions including baro setting, menu options and pilot-controlled brightness. Trilogy was designed primarily for 28-volt electrical systems, but it can be used in 14-volt systems via an external voltage converter.

More Than a Horizon

ground. The horizon line that separates the sky and ground, and the attitude background moves up and down and left and right around the aircraft reference symbol (boresight). The pitch ladder is familiar, with horizontal lines positioned every five degrees and labels every 10 degrees. When the intersection of the sky and ground intersect the center boresight, the aircraft is at zero-degree pitch.

But theres more to the Trilogy than attitude data. Theres an airspeed tape on the familiar left side of the display, just like in any traditional PFD. The airspeed range is zero to 450 knots, with a 60-knot viewing range. Tick marks are shown every 10 knots and numbered digits every 20. In the center of the tape is digital airspeed readout displaying the current speed in knots (40- to 400-knot range) and the tape itself can be configured for clear or grey presentation.

Theres also an airspeed-awareness color bar which has configurable Vne and Vmo V-speeds cues, as well as Vne, Vno, Vfe, Vs1, Vso, Vmo, Vfe, Vs1, and Vs0. For twins you can add Vyse and Vmc.

The right side of the display is the altitude tape in vertical format, with white numbers every 500 feet and tick marks every 100 feet. This calibrated, baro-corrected altitude range is from -1500 to 55,000 feet and is fed from the pitot and static input reference. The digital MSL readout is in the center of the tape displayed in white numbers. A baro pressure window is at the top of the tape with numbers that can be configured for white, blue or green text (on a black background).

L-3 tried hard to fully replicate the layout of common PFDs, and we contend that they succeeded.

The Trilogy ESI-1000 falls short in being considered a true PFD since it doesnt display navigational data, but it can display heading information youd get on the lower half of most PFDs. This requires the Trilogy to be interfaced with the optional MAG-3100 remote magnetometer. The price had not been finalized as we went to press. This is a remote, three-axis, magnetic field sensor that inputs to the ESI-1000 via RS-422 databus. The sensor is installed inside the fuselage (or inside a wing) and runs on 28-volt input.

When the magnetometer is used, a heading tape appears at the bottom of the display, and moves left and right following the direction of the aircraft (reference magnetic north). Theres a digital heading readout with lubber line (index) that points to the current heading shown on the heading tape. Adding the

heading data boosts the cost of installation due to the extra wiring and effort required to mount the remote magnetometer. Theres also a compass swing procedure thats required, just like any solid state heading system.

Trilogy is approved through an STC-AML covering a good variety of applications. As noted, the instrument must be installed on the instrument panel following guidelines stated in the STC installation manual. We emphasize this because one Cirrus owner wanted to install the system on the far right side of his panel, but this deviates from the pilots primary line of sight, and therefore the STC. Be sure to discuss mounting locations with your shop so the unit is installed in a location that is both legal and useable.

Kelly claims the instrument has been designed to function successfully in 360 degrees of pitch and roll, and is worthy of aerobatic maneuvers.

Given the Type Certificate in place for most aircraft (that likely require the use of a vacuum-driven attitude instrument), installing either of these products as a one and only primary replacement will require additional (and unlikely) FAA approvals. Kelly/RC Allen noted that they might pursue such certification in the future (in addition to their existing TSO C-4c), particularly since their soon-to-be certified standby power supply might offer redundancy in the event of primary electrical failure.

Until then, the three-inch model can be used to replace the turn coordinator when equipped with an optional slip indicator or inclinometer. It mounts to the bottom of the instrument and sells for $240.

The unit operates throughout the entire range of input voltages (9 to 32 volts) and uses a two-amp circuit breaker for power. The units are quite light-weight: 8.5 ounces for the two-inch model and 16 ounces the three-inch. Each unit can be mounted from the rear of the panel or surface bezel mount. The units can be ordered in either zero-degree or 18-degree tilt configuration. Theres a single mating connector on the rear of the units case.

The presentation of the attitude data mimics that of a mechanical horizon. The presentation is a color LCD display with 350 pixels per inch with a 15-frame-per-second refresh rate. The center of the display features a familiar symbolic airplane with wings that reference a pitch dial.

For pitch attitude reference, there is 20 degrees pitch up on the pitch dial and 30

degrees of pitch down. For roll reference, theres a fixed roll pointer that references the roll dial about the roll axis. At the bottom of the display, just below the -30 degree pitch line, is a unit processor annunciator. This is a blinking dot that moves left and right, showing the internal processor is working.

Two dimmer buttons (labeled DIM, with up and down arrows) control display dimming. There are two “AP” buttons that dont have anything to do with autopilot control. They are used to adjust the symbolic airplane position (see, AP cleverly stands for “airplane”) up or down once the aircraft is established in level flight, just as you would with a mechanical horizon.

The instrument takes care of its own alignment and, if a bank angle exceeds the capability of the processor, the unit temporarily shuts down, causing a red X to appear with the message “Exceed Bank Angle.” The unit will automatically reset after a few seconds. If not, the drill is to reset the units circuit breaker. Given this, we wonder how the unit really would handle aerobatic maneuvers.

Kelly is working on certifying an emergency battery supply system that will run the unit and isolate it from the aircraft electrical bus for power-failure redundancy. Overall, installing the instrument should be relatively easy, with little in the way of panel work and minimal wiring.

Whats the real benefit of even these electronic attitude displays? The digital technology is free from unreliable, spinning gyroscopes. The hope is for a long and reliable lifespan. Moreover, electronic displays with high-quality processors are likely to tolerate and accurately display extreme attitudes when an otherwise mechanical gyro instrument would give you the Italian salute, followed by the dreaded tumble.

The decision to drop the kind of dough a Trilogy requires is questionable. But its not out of the realm for many owners, and its one-stop-shopping for a complete backup solution is compelling.

The RC Allen electronic horizon price point is well within reach of most aircraft budgets. It can be used as a one and only primary horizon, for aircraft certified with electric artificial horizons.. Its a new product (as is the L-3), so its long term reliability is unknown. It certainly doesnt touch the Trilogy as far as feature set and functionality go, but it costs far less money. Once the unit racks up some hours, well feel more comfortable making a definitive suggestion for putting it in place of a primary horizon.

For now, well say each of these units qualify as eye candy with gee-whiz panel appeal. Good or bad, thats a proven buyer magnet.

Larry Anglisano isnt much for eye candy, but likes the idea of a reliable backup when deep in IMC.