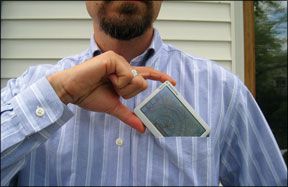 Our first reaction when pulling the Quadra from its box was, “That things tiny. Im gonna be able to read an approach plate or sectional chart on that? No way.”

Well, actually, yes way. The Quadras 4.3-inch screen has an 800 x 480 resolution. (For reference, a Garmin aera is the same screen size but has 480 x 272 resolution and Avidynes 5.8-inch EX600 panel-mount MFD has a 640 x 480 resolution.) As long as your eyeglass prescription is up to date all map elements, scanned charts and approach plates set to match the width of the screen were readable at the distance to the yoke

or nearby window mount.

The heart of the Quadra are six, user-configurable moving map layouts. These come preconfigured for sectional charts-actual, scanned sectionals with the aircraft plotted on top of them-terrain, airways, night, weather and emergency. You use the layout that works best when you need it, similar to switching between different screens on a panel-mount MFD.

All the layouts can be rejiggered to display most anything you want. This is both power and pitfall for the Quadra: It takes some time to get the screens configured just the way you like and its easy to overload both the screen with information and the Quadras processing power trying to display it all. The unit is noticeably slow when rendering a lot of data (although its much faster than its predecessor, the Anywhere Map ATC).

Once you pick and choose the features you want, it works well. Some options we particularly liked were the ability to overlay weather and TAWS-like warnings on IFR en route charts, Approach and Navaid frequencies on the moving map and the ability to save map range settings along with each view.

The Quadra uses a pressure-type touch screen (so it will work with gloves on) and hits a sweet spot in sensitivity. One of our

tests is how well the screen can distinguish a tap to select versus a drag to pan. The Quadra works well. It also offers a cool feature in that one tap pops up an information box about the tapped item. This is great for quickly double-checking a frequency or field elevation. Two taps opens a well-organized, detailed screen with airport info and weather (if equipped).

Anywhere Map has long offered special emergency features. You can display “cones of safety” showing which airports might be in your no-wind gliding distance. More interesting to us was the dedicated emergency function. Tapping this launches the emergency map layout and prompts you to select an airport. Tapping the airport immediately changes your flight plan for the diversion and shows with a green arc where your current angle of descent will reach ground level-and whether the airport is in range or not.

That green arc is used in normal ops for vertical navigation (VNAV), which is simple and effective on the Quadra. It has a “virtual ILS” feature that creates a generic three-degree glideslope to specific runways at most any airport. You can also load the instrument approach waypoints for about 4000 approaches. It seems a bit hit-and-miss which approaches are available at which airports, so we wouldnt count on this feature being available all the time.

Additional Quadra features we appreciated were optional reminders for things like switching fuel tanks or lowering gear, georeferenced airport diagrams for major airports and integrated fuel prices. Obstacle and terrain warnings were adequate, although not so brute-force obvious as on competing units.

The moving map program is called Anywhere Map. Approach plates are shown through a companion program called Pocket Plates. We think the integration between these two programs has room for improvement. You can toggle between them, but

you must select the destination airport manually in both places.

The approach plates are georeferenced, so the airplane position appears as you fly. GPS-derived airspeed, heading and altitude also appear on the plate, which is great in the last stages of the approach. Another cool trick is that terrain awareness can be displayed in the plan view so you dont have to give that up when you view the plate during the approach.

Both Pocket Plates and Anywhere Map use a common system of buttons down the sides (or top and bottom in portrait mode), so if you understand one program, you understand the other. The buttons can be toggled on and off to better use the small screen. Navigation through the software is easy with the buttons and menus that are rarely more than one level deep. Its not always intuitive, however. Anywhere Map uses some non-standard icon, such as a magnifying glass for zoom rather than find or using the term “hold” rather than “suspend” to temporarily stop the sequencing of a flight plan.

Speaking of zoom, we think this is a miss on the Quadra. You can jump to common ranges such as 10 or 50 miles, or autozoom, but there are no familiar plus/minus buttons to zoom in and out.

A feature we think is unique to the Quadra is built-in WiFi. This not only makes updating the data and approach plates a snap, it can also be used to download METARs, TAFs and NEXRAD to the device from your internet connection. Since this data only stays on the device for one hour, its not a replacement for XM weather, but it can be handy to check weather for your route at

the FBO or hotel and for checking what that TAF said before you took off. Its also perfect for updating TFRs just before you walk out to the aircraft.

If you want XM, youll need the external XM receiver that communicates with the Quadra via Bluetooth. We found the system worked fine, but it requires finding a place for the receiver box and antenna, as well as having a second power supply. Youll definitely want to keep the Quadra plugged in. Battery life is two hours on the outside, less if you did some WiFi downloads before you took off. But thats a trade off common to these small GPSs.

We were disappointed with the sunlight-readability of the Quadra screen. Its barely adequate, in our opinion. There were times we had to shield it to see the screen at all. In any shadow or in the clouds it would be just fine.

We were also disappointed with the automotive mode for the Quadra. Side-by-side with a Garmin Nuvi, both units plotted the same route, but the Garmin predicted our arrival with about one minute accuracy. The Quadras ETA was off by 45 minutes at the trips start. There were also differences like “Turn left in 600 feet on Newbury Street,” for the Garmin versus just “Turn left in 600 feet,” for the Quadra. Not that this matters to aviation use, but dual capacity is important to many users. The Quadra never got us lost, though.

Lastly, Anywhere Map still has some kinks to work out in their software. In addition to the system slow-downs when displaying complex data, we saw some screen lockups and errors that required restarting the unit. To the Quadras credit, it restarts quickly and the kind of messing about that caused the lockups were not things youd likely be doing during critical phases of flight. But theres still some bug squashing to do.

In our GPS survey earlier this year, Anywhere Map got top marks for customer service, so we expect the company will actively correct these. Theres also a 30-day, money-back policy on the Quadra and a one-year warranty.

We cant argue at all with the Quadras price. The basic unit is $595, plus $10 for the mount of your choice. Sectionals are an extra $199 and en route charts and approach plates are another $200 on top of that. The Bluetooth XM receiver is an additional $695. That still makes the Quadra one of the least expensive solutions for what it offers. Anywhere Map also has the least expensive data updates of the leading GPS manufacturers, at $115/year for basic data and $260 for everything. Lifetime subscriptions are available.

Our takeaway from the Quadra is that makes an ambitious reach to fit all that capability into such a small package and it largely succeeds. If youre in the market for a super-portable GPS, the Quadra is well worth a look.