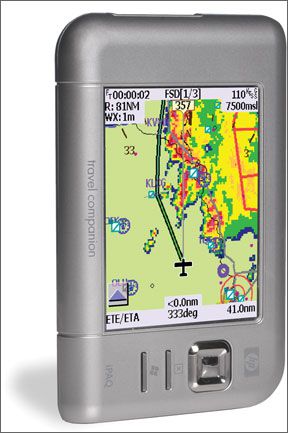 Control Visions Anywhere Map and the Garmin GPSMAP 496 do pretty much the same things. They both offer GPS-driven moving maps with an extensive aviation database. Both can display datalink aviation weather and traffic.

Weve reviewed both the GPSMAP 496 and the Anywhere Map suite in these pages before, but our objective this time was a head-to-head comparison. To test these devices we went flying, using them side-by-side on one flight and individually on one or more additional flights.

In a features and ease-of-use comparison they each win some and lose some. The real differences, in our opinion, come down to the display and convenience.

The display on the Pocket-PC-based Anywhere Map system is inadequate in direct sunlight and the plethora of external sensors, receivers, antennas and power cables Anywhere Map requires is difficult to manage. This isnt as important if you can “install” all this in the airplane once, but it was a real factor as we installed and removed the equipment for each flight.

The GPSMAP 496 is the newest version of a long line of portable navigators. Its features include aeronautical databases, terrain, WxWorx weather, XM radio, an approach fix database, airport taxi diagrams, an airport database, a crisp, sunlight-readable display, GPS-derived basic emergency instrumentation and even highway and marine modes for when you want a GPS outside your aircraft.

It can display a flight plan entered in a Garmin panel-mount GPS or TIS-based traffic from a Garmin Mode-S transponder. It can also output frequency information to Garmins SL series radios. These features require dedicated wiring installed in the aircraft. The 496 retails for $2595.

The 496 is intuitive in its basic functions but can be more challenging with less-used or more-ambitious functions. Between skimming through the manual and experience with a Garmin GPS from years ago, we had no trouble with the 496.

There is one notable limitation of Garmins handheld navigators: no keyboard or touch screen. You select a field for input, select the first character in that field, scroll through the list of meaningful choices for that character, then move on to the next character and repeat. This works well, even in turbulence, but is time consuming and can be frustrating.

Using GPS alone, Garmin is able to derive a reasonably seamless emergency simulation of all the basic instruments except the attitude indicator. In an emergency, its possible to fly using nothing but these simulated instruments (see sidebar).

Garmin has long included an approach-fix database with its handheld navigators. In practice, you typically append the final approach fix (FAF) after the last en route fix. The 496 navigates directly to the FAF from that last en route fix, and then

provide guidance down the final approach course. Theres no provision for vectors-to-final or for flying a full-procedure approach. Of course, this feature is for reference only.

The display on the GPSMAP is easily viewable in direct sunlight. A normal installation of the 496 involves mounting the single unit and running cables to the remote GPS antenna, the remote XM antenna and to the cigarette lighter for power. The 496 can run for a few hours on internal rechargeable batteries. The remote XM antenna is somewhat smaller than a hockey puck, and is about as convenient as possible for an external antenna. Theres no provision for mounting but it has a non-skid base intended to just sit on the top of the glare shield.

Although there are many worthy competitors, Control Visions Anywhere Map has emerged as a dominant system to turn an existing computer into an aviation GPS navigator. Control Vision offers a veritable smorgasbord of software and third-party hardware components from which to choose. Anywhere Map is robust aviation moving map software that will run on a variety of computers and can display XM weather and traffic. Anywhere Map works with many GPS receivers, both built-in to the computer (where available) and external. For weather you need an outboard receiver. If you want to add traffic youll need the separate Zaon XRX traffic detector.

All these options and configurations allow the user to tailor a solution to exactly meet their needs. This flexibility also becomes the Achilles heel – most of this stuff requires power, data and antenna connections and that means youve got to route all those cables and find places to put all those little boxes. If you fly different aircraft theres no escaping the inevitable tangle of cables and devices during each

Control Vision tells us that most GA pilots prefer the compact size of the Pocket PC as the host platform for Anywhere Map, and thats what we tested. The HP iPAQ 5915 has a built-in GPS, so this can be a self-contained moving map solution with all the database features such as taxi diagrams and optional approach plates. Even without WxWorx you can still get weather when your connection to the Internet during your pre-flight planning for later review en route. Clearly this isnt as useful as the near real-time weather from WxWorx, but its free. Our test setup included a WxWorx receiver and the Zaon XRX traffic detector, both sending their data wirelessly via Bluetooth. Anywhere Map takes the data from the Zaon and overlays that on the moving map. If youre considering portable traffic, displaying that data on the navigator is a real plus.

This configuration required power cables to all three devices, the separate WxWorx antenna and an optional external GPS antenna for best reception. If you choose one of the other computers youll also have to deal with an outboard GPS and we suggest a battery-operated Bluetooth one with built-in antenna for completely wireless GPS operation.

All these options arent much use if you cant see it in the cockpit. We found the screen on the iPAQ 5915 to be so difficult to read in direct sunlight that we couldnt use it until we became more familiar with its operating logic and where things were located on the screen. Even after getting to know the software, we found ourselves getting our face close to the display and operating it with one

hand while shielding it from the sun with the other.

Control Vision says that the other platforms such as the Samsung Q1U (about twice as large as the 496) or Motion Computing tablets (larger yet) do provide excellent sunlight readability. We suspect this will be a vastly superior setup.

Overall, wed say that the features compare favorably. Both provide dynamic moving aeronautical map navigation with comprehensive databases for terrain and airport data. Both offer datalink weather and taxi diagrams. Both offer an option for traffic, although it requires wiring to the appropriate Garmin transponder for the 496..

We found the operating logic of Anywhere Map less intuitive than the Garmin in some areas, like flight plan entry. En route, however, the touch screen on Anywhere Map platforms allows much easier use. Want to get information or weather for an airport? Click it. With the Garmin, youve got to select that airport in any of a number of different ways like scrolling to it or doing a database search. Thats not difficult, but isnt as quick as Anywhere Map. A potential downside to the touch screen is that our fingers were often too big to accurately hit what we wanted, especially in turbulence.

While the Garmin has the emergency instrument page, Anywhere Map can display actual FAA approach plates. Although the screen on the Pocket PC is too small to read the entire plate, you can zoom and pan to get the bigger picture. The approach plate is georeferenced, meaning its just one more moving map and you can see your progress right on the plate. Note that you must calibrate each plate once before the georeference works and position is only as accurate as the scaling of the original drawing. Thats usually good inside the 10- or 15-mile circle on the plate, but not perfect..

Recommending the GPSMAP 496 over the iPAQ 5915 running Anywhere Map in a typical GA single is easy due to the latters sunlight readability issues. The cable and outboard sensor issues associated with Anywhere Map on any platform can be an issue for the renter or if you want to use the same GPS in your car or boat. However, if you are able to “permanently” install the hardware and you can accommodate a larger (more expensive) computer with a brighter display, then wed lean towards Anywhere Map.

The comparison of features and functions between the two products mostly overlaps with a little give and take in between. We really like the ability of Anywhere Map to display full approach plates, but the Garmin instrument page could save your bacon in an emergency.

Finally, theres one benefit of the a la carte nature of Anywhere Map that we havent mentioned – upgrades. While the software in the 496 can be updated, Garmin typically only does so to correct bugs. Control Vision, on the other hand, continues to evolve Anywhere Map and if you choose a robust enough platform now, itll likely accommodate enhancements and new features for years to come. To upgrade with Garmins integrated all-in-one approach, youll probably have to replace your 496 with what well guess will be the 596, then the 696, and so on.

Frank Bowlin is a contributing editor to

Aviation Consumer and flies both a Cessna 340 and a Beech Skipper.