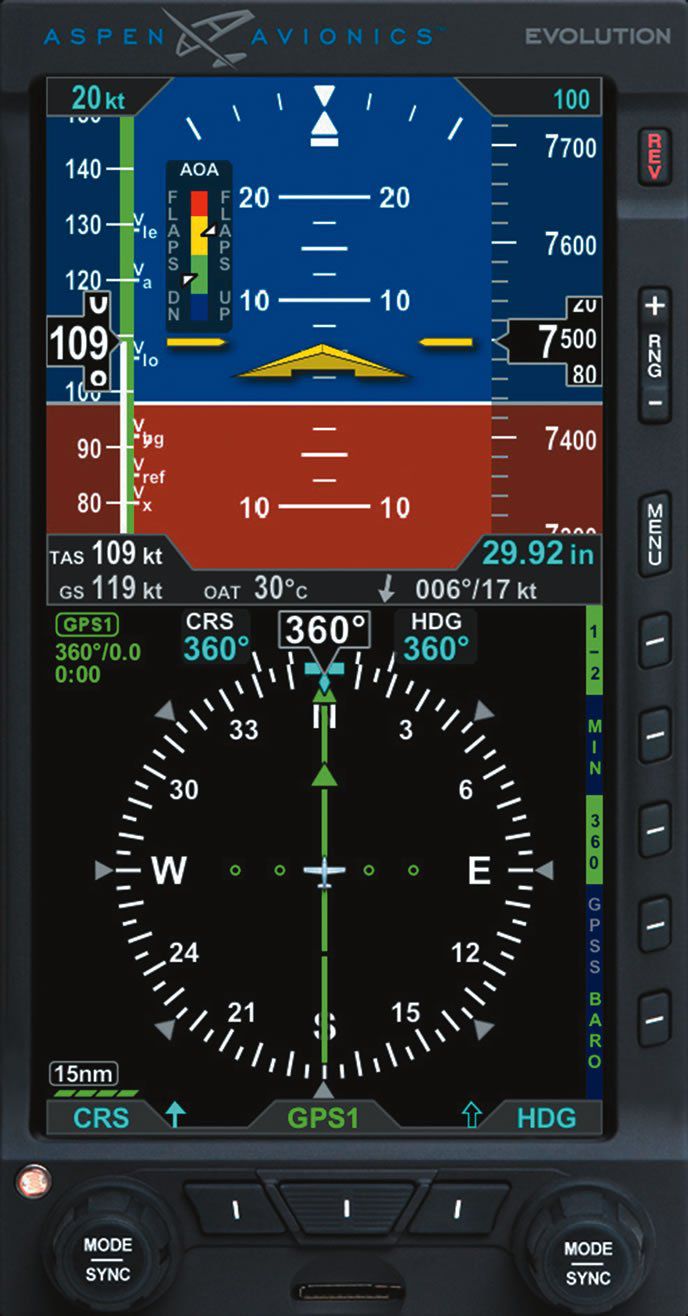 The way we see it, all PFD (primary flight display) systems should include angle-of-attack sensing and display as a standard function. After all, nearly all of the data that’s required for computing a stalled condition can be acquired from the PFD’s air data computer and AHRS sensor.

This is partly how Aspen Avionics is adding angle-of-attack functionality to its Evolution PFD and MFD displays. By throwing aircraft-specific programmable software in the mix, the Evolution AoA system is able to compute stall condition for wing flap configurations without referencing an external flap position sensor.

The result is a simple AoA upgrade that doesn’t require the costly installation of additional sensors, other than what is already included in an Aspen PFD/MFD setup.

Aspen’s AoA references the AHRS and air data sensors that are integrated within the Evolution display, in addition to input provided by certified panel GPS receivers. The backup GPS that is contained in the RSM (remote sensor module) can’t be used for primary GPS input, but most popular GPS navigators can, including vintage models from BendixKing, for example.

All of this data is combined into an airframe-specific aerodynamic computer model that is configured during installation. The computer model then uses AHRS-provided acceleration data to predict the aircraft angle of attack, which in turn sends the data back to the display.

Aspen’s AoA provides an indication of where the aircraft is in relation to the angle of attack with flaps up and down, which is simultaneously displayed. Simply focus on the correct indicator (flaps up or down), based on the configuration of the flaps. The benefit of this dual display is you’ll always know the predicted angle of attack should you retract or extend the flaps.

An installation procedure calibrates the AoA sensor through manual data entry of airframe-specific stall speeds and approach speeds—with and without flaps.

The AoA functionality will be compatible with all 1000-series Evolution displays, including the Pro, VFR, Pilot and MFD through a field-installed software update. As we go to press, Aspen hasn’t determined final pricing for the upgrade or how the feature will change the price of existing systems in the Aspen product line. Aspen expects certification sometime this summer.