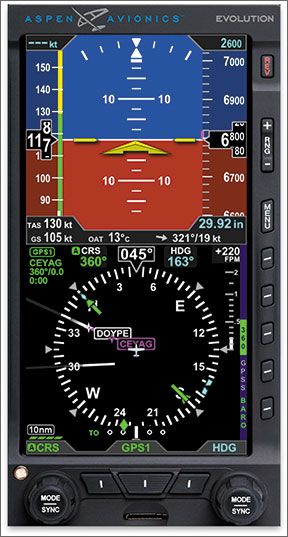 Aspen Avionics said its market survey showed that many VFR pilots would purchase primary flight displays, but can’t justify the high cost of the upgrade. How high? In some cases, a single-screen PFD retrofit can cost $15,000 and higher.

That’s one reason why the VFR-only LSA market is appealing. Many LSAs come with full-featured non-certified PFD models from Dynon, Advanced Flight Systems and even Garmin, to name a few.
But in lower-end certified aircraft, some owners are stuck with steam gauges because high-end, high-priced PFD products like the Garmin G500 and Aspen’s own Evolution are geared toward IFR aircraft and pilots with IFR missions.

That leaves a void in the lower end of the market and VFR pilots with few upgrade options, other than paying a premium for equipment that’s overequipped for the mission or for the aircraft.

Aspen hopes to fill that void with the new Evolution VFR flight display. With a starting price of $5000, it has many of the same primary features of the popular Evolution Pro PFD, but not the advanced features you’ll need for IFR flying. Let’s see if the economics make sense.

Model line
Still not familiar with Aspen’s Evolution PFD? Here’s a quick review. The Evolution has every primary six-pack flight instrument built into a single display, including airspeed and altimeter in a tape format. The electrically driven instrument has an integral air data computer that plugs into the aircraft’s pitot and static system, plus a self-contained attitude heading reference system (AHRS). Heading data comes from a remote magnetometer that’s equipped with a temperature sensor and GPS receiver. There’s also an integral standby battery that powers the display for up to 30 minutes.

Aspen’s PFD is a single 760×400 32,768-color LCD screen design that measures six inches. The bezel width is such that it fits dead center in the middle of the six-pack, sliding through the existing three-inch instrument cutouts and secures to a rectangular, surface-mounted bracket. This often requires little if any panel modification or cutting.

The Evolution, which was previously available in two price points—the $6180 entry-level Pilot and the flagship $10,187 Pro—is a primary instrument, but still requires backup flight instruments, including airspeed and altimeter. We first covered the Aspen PFD in the June 2008 issue of Aviation Consumer. Since its introduction in 2008, the platform has improved, its features have advanced and Aspen has shipped over 6500 systems.

To say that the Evolution has been an avionics success story is an understatement.

At first blush, the new Evolution VFR might appear to be similar to the lower-end Evolution Pilot, but it differs in many respects. The Pilot, while also targeted at VFR missions, has no autopilot interface, no navigational radio interface and won’t support any of Aspen’s Evolution Hazard Awareness add-on software, including ESV synthetic vision, ADS-B or traffic advisory functions. Compared to the IFR Pro model, the Pilot is stark, with essentially no path for upgrade. According to Aspen, the Pilot will remain in the product line for now.

Interface
A major part of the Evolution interface is the ACU, the analog converter unit. This is a remote converter box that inputs a variety of analog signals (including autopilot and navigational sources) and then outputs the data to the display in a digital format.

The ACU doesn’t come standard with the Evolution VFR. Instead, it’s a $1000 add-on and it requires additional interface wiring. Without it, most autopilots won’t have heading and navigational tracking capability. With it, most can gain integral GPSS digital steering that’s commanded from a dedicated soft key on the display.

There’s also heading command.
The ACU is required to display analog CDI information from a traditional navigation radio, including the popular King KX155. The VFR model has no HSI—just an onscreen CDI. If you have a Garmin GNS430 or even a standalone GPS navigator that outputs nav data in a digital format, you won’t need the optional ACU. These digital receivers output directly to the Evolution display. But there’s a sizable limitation.

Garmin’s GNS430 and popular versions of the KX155 radio also have glideslope and localizer receivers—a function that won’t play on the VFR Aspen—ACU, or not.

Like all of the other Evolution models, the VFR requires (and includes) a magnetometer or heading sensor (RSM). This can be installed on the outside or inside of the fuselage and is a major part of the install. Since the RSM contains an internal GPS receiver for redundant backup, plus a temperature sensor for air data calculations, it’s best to install it on the outside. For composite aircraft, this will require additional approvals because it’s not included in the STC.

Incremental upgrade
According to Aspen’s George Pariza, that’s one benefit of buying into the Evolution VFR because it makes upgrade costs more palatable.

“This is an upgradable product with a line of options. If you are a freshly minted VFR pilot with an entry-level aircraft and want to get started with a PFD, the Evolution VFR is a cost-effective way to get one. If you decide to train for instrument flying, there’s an upgrade path that brings the Evolution VFR to an IFR Evolution Pro,” says Pariza.

That upgrade path to a full-featured Pro is $4690 in addition to the $1000 ACU that might be required, depending on the interfaced equipment. We think it’s wise to purchase the VFR with the ACU option if there’s any chance you’ll step up to the Pro. This avoids a second teardown and installation when you upgrade to the Pro later on (the VFR to Pro upgrade is accomplished by loading the Pro-specific software into the display).
While on the topic of upgrading, it’s worth a look at other Evolution capabilities and pricing, should you anticipate a Pro upgrade. The ESV synthetic vision software is $2995 and now comes as a free trial on all new Pro models. Software for overlaying traffic and weather is $795.

The ACU2, which is an upgraded converter that interfaces select radar altimeters and ADF receivers is $2280. The EA100—a digital autopilot gyro emulator that replaces mechanical autopilot gyros—is $2495. These major options bump the price of an Evolution Pro to $18,752, not including installation. Garmin’s G500—the only other competing certified PFD—is just shy of $24,000, without installation. Garmin’s non-certified G3X PFD is $4550.

PLAN your mission
That’s what you’ll need to do before committing to the Evolution VFR, while accepting some potential trade-offs. While we think the system has a price point that can appeal to pilots with simpler missions, we think it limits some VFR operations since it doesn’t have glideslope capability.

You don’t need to fly in IMC to make use of a glideslope navaid. Referencing a glideslope during visual approaches at night, for example, adds another layer of situational awareness that will be missing on the VFR PFD. If that’s a concern, especially if the aircraft is already equipped with a glideslope radio, it’s possible that the installing shop can retain the existing CDI for use as the secondary system. Perhaps not the cleanest interface, it offers some redundancy, if there’s panel space.

On the plus side, the VFR PFD is better than no PFD and might add to the aircraft’s resale value or at the least, make it more desirable on the used market. It can play traffic and weather graphics, plus its easy upgrade path is also a plus, as long as you install the ACU first.

Last, we think the Evolution VFR can be appealing to buyers that want to spread the purchase out over time. The potential $6000 upfront savings, on average, helps take some of the sting out of budget-blowing avionics upgrades.