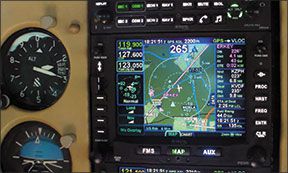 Avidyne and its IFD-series GPS navigator project has taken a beating from both customers and the dealer network. It’s no secret that the company has slipped several times on its IFD certification and delivery projections. Worse, Avidyne offered a pre-delivery sales incentive that required early adopters to pay a refundable deposit in exchange for a sizable discount on the cost of the IFD540 or IFD440 unit. Some of those customers have received or are requesting refunds because of undelivered product.

But not all buyers are disgruntled over Avidyne’s certification delays. We’ve heard from position holders that remain patient as Avidyne continues to endure the rigors of the FAA certification process, and postings on Avidyne’s online project update forum, avidynelive.com, has more than one counterpoint from positive buyers who feel that waiting for the IFD is a better option than buying from the competition. That competition is Garmin, of course. There’s also Bendix King’s KSN770, a touchscreen navigator that’s years overdue and currently stalled in the certification process.

To see the IFD540 in the real world, we recently went flying with the uncertified unit in Avidyne’s Cessna 182 test bed—disproving the conspiracy theory that the IFD doesn’t really exist.

While you wait
The first thing Avidyne’s IFD project director Steve Jacobson showed was how easy the installation is when replacing an existing Garmin GNS530W. That’s one of the main reasons some buyers are holding out for the IFD540 because it requires no panel work or rewiring. Simply unlock the GNS530W from its tray, pull it out and slide the IFD540 in its place. As promised, it really is a while-you-wait effort.

Technicians should be familiar with the system setup and configuration process because Avidyne mimicked the setup menu of the Garmin GNS navigators. This is where interface parameter such as RS232 and ARINC429 databus, bezel lighting and external sensors are set.

While it’s recommended that shops conduct it, given the level of interface that will exist between other systems in the aircraft, Avidyne said that flight testing isn’t required after installing a slide-in IFD. Not counting a flight test, the entire installation might take an hour or two of shop labor, with paperwork.

Compatibility
The latest controversy surrounding the IFD project is the unit won’t be entirely functional with some Garmin systems, including the GMX200 MFD. When connected with a GNS530W, approach charts in the GMX200 are automatically loaded when you select an approach, eliminating the additional step of manually selecting the chart from the GMX200. Avidyne said it figured out a way to replicate the MAPMX serial data label that’s required for automatic chart loading between the two systems. For some, the lack of this functionality would have been a deal-breaker, but that’s been addressed and Avidyne said it will work.

Whether you’re starting from scratch with a new installation or sliding the IFD into an existing GNS installation, there’s a wide variety of compatible interfaces. Aspen’s EFD1000 PFD, along with vintage Bendix/King KI525-series analog HSI systems are fully compatible. If you don’t have an HSI or PFD, Garmin’s GI106A CDI works, as will resolver-equipped Bendix King indicators.

The aircraft we flew had Avidyne’s new AXP340 ADS-B transponder. This is a slide-in replacement for Bendix King KT76A/78A transponder and has 1090ES ADS-B output. Avidyne says the IFD navigators will serve as an approved GPS source for satisfying the ADS-B out mandate.

If you fly a turbine aircraft that requires a TAWS-B terrain system, a version of the IFD540 has integral Class B TAWS for an additional $7995. Standard is a full-featured terrain awareness system that has both visual and audible terrain alerting. We went sniffing for towers and obstructions on the flight demonstration and the IFD accurately displayed the threats.

Multi-touch screen
We’ve operated the IFD540 in demo stands, but this was our first crack at fingering the so-called hybrid interface in flight. A hybrid user interface means that any function you can accomplish with the touchscreen can also be accomplished using mechanical knobs and buttons. In our view, the hybrid feature set on the IFD540 should satisfy a wide variety of users because there’s enough familiar menu commands that are brought over from the GNS530W. Users should be familiar the Procedure command that’s used for loading approaches, departure and arrival procedures, for example. But the FMS wasn’t born from the GNS530. Instead, it trickles down from Avidyne’s R9 integrated cockpit. For that reason, we think Avidyne should offer structured factory training the way Garmin does with its GTN-series navigators. We suspect there will be a sizable learning curve that tags along with an IFD upgrade. As easy as the installation is, it’s unrealistic to think you can fly away with the same level of proficiency you perhaps had with your old GNS530W. In our view, the Geofill FMS on the IFD is worlds ahead of the GNS530.

While Avidyne’s Jacobson was flicking his fingers primarily on the touchscreen, our fingers went straight for the buttons and knobs when loading an approach in the bumpy Florida skies. Despite the touchscreen, we went straight for the bezel buttons—especially the familiar PROC key—a command we’ve been using for years on the Garmin GNS navigator. Because the menu structure on the IFD was foreign to us, having the familiar keys was reassuring, and we suspect many users will be glad those keys exist. Still, we had some nits.

First, we think the onscreen touch labels are a bit too small. Chubby fingers might miss them on the first press, as we did while flying in the bumps. Jacobson experimented with different types of gloves to determine which work best, but he told us most of the gloves he tried—including Nomex—are workable. Don’t underestimate this utility. If you fly in cold climates, a capacitive touchscreen has to work with gloves.

The IFD supports multi-touch touchscreen technology, meaning that features such as the two-fingered pinch zoom for changing map and chart range is fully enabled.

Navigating the IFD is fairly straight-forward, thanks to what Avidyne calls a Page and Tab user interface. That’s because most of the major functions revolve around the three-page function keys at the bottom of the IFD bezel. Each of the three function pages has associated tabs and the buttons serve as left and right rocker keys to navigate the tabs.

We’ll cover the full user interface in an in-depth review once the IFD is certified. However, based on our short flight with the IFD, we think the interface is best served with dual IFD navigators because a single screen can get busy in a hurry. For instance, a second IFD can be used to program procedures, using it as a keypad. The second unit—perhaps the smaller IFD440—helps spread out some of the data that tends to clutter up a single screen. Remember, the IFD is a powerful FMS that originated from large integrated cockpit screens and is repackaged to fit on the IFD’s single 5.7-inch screen. We think the data will be even more cramped on the smaller IFD440, a unit that replaces the Garmin GNS430W.

Speaking of screens, we can say that the IFD’s full VGA screen with 640-by-480 pixel count is extremely sunlight readable. The cockpit in the 182 we flew was splashed with bright Florida sun and the display never washed out. The unit also ran surprisingly cool. Avidyne built several fans into the unit and it’s obviously an effective means of keeping the box reasonably cool.

Worth the wait?
Despite the rocky start Avidyne had with the deposit thing, we believe that the IFD will be worth the wait for many users that want an alternative to Garmin’s GTN-series. Those units are built around a feature set that’s almost entirely touchscreen, with a few exceptions.

Moreover, the IFD is a huge money and time saver when it comes to installation. Garmin’s GTN750 can require sizable amounts of panel reconfiguration, which means teardown, downtime and expense.
Avidyne’s Tom Harper hopes that the IFD540 will begin shipping in June of this year. “We’re in the home stretch of the final certification and if all goes as planned, we’ll be shipping during the later part of June,” he said at Sun ‘n Fun 2014.

To keep tabs on the status of the IFD program, visit the IFD forum at www.avidynelive.com.