Think back almost 20 years when big-screen flight displays were becoming the OEM standard and you’ll remember the Avidyne Entegra. These were standard in over 4000 Cirrus and 700-plus Piper models, and while Garmin’s G1000 eventually dominated the new-airplane market, there are still plenty of Avidyne Entegra PFD and MFD systems flying around. Pilots like them for their straightforward feature set and generally good reliability. Enter the Avidyne Vantage.

These are clean-sheet displays (and the third generation of Avidyne’s display and processor platform) with a control set and operating logic that trickles down from Avidyne’s IFD-series retrofit navigators. For the first product release, these are huge 12-inch diagonal XGA screens that have Avidyne’s hybrid touch technology. Moreover, they’re designed to use much of the existing wiring in an existing Entegra suite. Here’s a look. 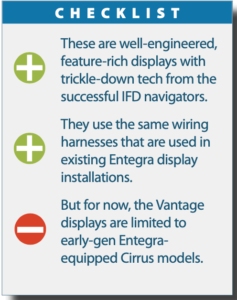 Before we get too far in, you won’t be able to retrofit these new displays in anything but an Avidyne Entegra-equipped Cirrus. But there is a bigger story here, which we’ll get to. Logically, Avidyne went after the initial STC for these airplanes (produced from around 2003 through 2008) because there are plenty of them flying around that still sport Entegra screens. They are mostly reliable, if not expensive to repair—especially for owners who didn’t purchase Avidyne’s extended warranty coverage. And while some of these Cirrus owners have upgraded to Garmin’s G500 TXi displays, there are still plenty of Entegras flying around. Avidyne made it clear that it plans to fully support the existing fleet of them.

Avidyne also did the right thing in an attempt to make upgrading as seamless as possible. While the interface connectors for the Vantage displays are different than the ones used for the Entegra, much of the existing harnessing can be used. This also includes retaining the magnetometer used for resolving magnetic heading.

There is a lot of interface in existing Entegra suites, which might include the L3 Skywatch active traffic system, the WX500 Stormscope, the Honeywell KGP560 terrain system, plus engine instrumentation systems. Many of these aircraft also have the XMD76-series SiriusXM weather receivers. These are all compatible with the new Vantage displays. The Vantage will work with a wide variety of ADS-B In receivers.

Perhaps the most time-consuming part of a Vantage transformation will be replacing the instrument panel. Still, Avidyne went big with its first variant of the Vantage because the Cirrus is one of the few airplanes with the panel space to accommodate them, especially without a control yoke in the way. The interface requires two displays (PFD and MFD), IFD navigators and Avidyne’s DFC90 retrofit autopilot.

Each Vantage display has dual attitude reference sensors (ARS) and the MFD can function fully as a PFD when in reversionary mode. Avidyne says the STC for the Cirrus will include the use of most all existing standby flight instruments. Like the IFD navigators, the Vantage displays have Avidyne’s hybrid-touch, where you can use a combination of buttons, knobs and the touchscreen—an interface that’s been well embraced in the navigators. There is also 3D synthetic vision as standard.

Since the Vantage interfaces directly with the DFC90 stack-mounted autopilot, the PFD has full autopilot mode control and annunciation, accessed via touchscreen or with the knobs. Like the IFD, these displays use Avidyne’s Page and Tab user interface (the PFD, Map and Sys tab keys are on the MFD only), which avoids a deep menu structure and allows for easy access to major functions.

The Vantage displays save considerable amounts of space behind the panel because of their slimline design compared to the Entegra. The existing Entegra displays in the Cirrus are 10-inch models, and while the Vantage displays are 12 inches, they make better use of screen real estate with less bezel space. They do, however, stand a half inch taller. Each display houses all of the sensors needed (except for the magnetometer), including an air data computer, which attaches to the rear of the display. At press time, Avidyne hasn’t decided if this computer will be remotely mounted in the Cirrus or bolted to the display.

On Entegra-equipped aircraft that had basic engine instruments displayed on the PFD (not all did), the Vantage PFD will also display them. This includes manifold pressure, RPM and fuel flow. The PFD can be dumbed down into a standard attitude presentation (blue over brown) by turning the synthetic vision off. Maybe the aircraft will be used for primary training or you want a more basic configuration.

The Vantage MFD, like the IFD navigators, is highly configurable. There is the plan-view moving map, plus a color-contoured terrain base map with an option for certified TAWS-B. That means the KGP560 GPWS processor can be removed from aircraft in which it’s installed, saving some weight. The datablocks on each side of the display are configurable, include the graphical engine data.

The MFD hosts a dedicated engine instrument page, and first-gen Entegra users will be comfortable making the transition. It displays an analog-style engine cluster with digital readout, EGT and CHT for each cylinder, a lean assist function, plus electrical system and fuel monitors—everything you would expect from a modern display. Avidyne’s Dan Schwinn noted that because Cirrus has worked hard to implement standardized training, the new Vantage system won’t introduce new complications.

As you would expect, the MFD displays a full-screen view of electronic approach charts and airport diagrams. One new feature is a split-screen view on the MFD, which is a map on one side and the flight plan “trip page” that’s exported from the interfaced IFD navigator.

One advantage of the Vantage is the reversionary capability. In case of a PFD failure, simply press the PFD button on the MFD and the display looks identical to a PFD—no abbreviated data. This includes autopilot control and integration. Moreover, all of the pages that were on the MFD are still there, and you simply press the Map and Sys buttons to access them. You can even display a split-screen view to show PFD plus map, PFD plus chart and PFD plus engine instruments as examples. “The reversionary story is much stronger for the Vantage than it was for the Entegra,” Schwinn said. He’s right—it’s a sizable leap in utility.

Like many, we’ve been wondering when Avidyne would finally bring a retrofit PFD to market and the Vantage displays have been years in the making. From what we see, they were worth the wait. We wish there were more applications out of the gate and while there are still lots of Cirrus models that need a modern face-lift, we think there are plenty of loyal and satisfied Avidyne IFD owners who would jump at the chance to add Vantage displays to their panels. Looking down the road, we envision smaller Vantage displays (likely 10-inch and even 7-inch variants) that will more easily fit a wider variety of panels.

Still, the mere presence of the Vantage product means more welcomed competition in the big-screen retrofit display market currently dominated by Garmin. This includes the G500 TXi touchscreen PFD/MFD, which is available in a 7-inch portrait or landscape configuration ($11,995) and a 10.6-inch landscape display ($15,995), with engine data as an option.

Avidyne says the Vantage STC for Entegra-equipped Cirrus models will be ready sometime in early 2022. Pricing is set at $12,500 for each display, which includes the core credit for the removed Entegra. At an estimated and conservative 40-hour installation effort, out-the-door pricing might be somewhere around $30,000 for the typical Cirrus. It will be up to shops to handle the panel work, and Avidyne says it will design the panel that can accommodate the two displays, plus provide all of all the drawings and hardware necessary to make the electrical and panel transformation.

“This is designed to be a fleet upgrade, and we want all installs to be the same so they are easier to support,” Schwinn told us. And support is something that Avidyne has worked hard to improve upon, and we think it has succeeded. That, and what looks to be a well-engineered new product, should be a healthy shot in the arm for Avidyne—a company that is more than holding its own in a competitive avionics retrofit market.