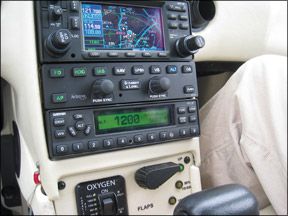 Cirrus Aircrafts installation of the Avidyne Entegra PFD in 2003 was really the turning point for glass cockpits in GA. But at the time, there was no attitude-based autopilot on the market capable of using the digital gyros (AHRS) from the PFD to fly the aircraft. That meant that Cirrus (as well as Columbia, Piper and anyone else who used the Avidyne system) hid an electric turn coordinator behind the panel and used it to drive the S-Tec 55X rate-based autopilot.

Weve always seen the S-Tec 55X as an acceptable, but not stellar performer. Its weaknesses are most pronounced on coupled ILS approaches in strong, gusty winds where it will often hunt left and right to try and find a heading that keeps the needles centered. GPS steering (GPSS) largely fixes this issue, but that doesnt help on an ILS. Nor does it work well on an LPV because the 55X was conceived before the days of GPS approaches with vertical guidance so it cant combine vertical guidance, with GPSS.

Owners have adapted, sometimes muttering to themselves as they manually “helped” the autopilot get settled in on approaches or harsh intercept angles. They also got really good at pushing the 55Xs buttons just right when arming an altitude or navigation capture-or let out another muttered curse when they leveled off accidentally instead of climbing.

Avidyne now has an alternative, designed as a slide-in replacement for the S-Tec 55X. The DFC90 uses the same tray, wires and servos as the 55X, but gets its data directly from the PFD. This means its an attitude-based autopilot with access to additional data, such as the winds aloft. The result is an autopilot that can outperform its predecessor in performance and safety.

The performance gain is two-fold. Using aircraft attitude, the autopilot should ride more steadily through turbulence. We tested the DFC90 on a relatively calm day, so we cant verify that. But we do know the S-Tec 55X wasnt a gold medalist in this category compared to even older attitude-based systems, such as the Century.

The gain we could see was in intercepts and approaches. Avidyne makes the rather tongue-in-cheek claim that the maximum intercept angle for the DFC90 is 179.9 degrees. We tried a 90-degree intercept with a quartering tailwind to a GPS course and an ILS, and saw perfect joins both times. The winds werent challenging on the coupled approaches, but there wasnt even the minor hunting for the correct pinch and heading as we descended like were used to with the 55X. It was also unfazed by any flap or power changes we put in or took out while on glideslope.

The only place we did see the autopilot get behind was on a non-precision approach using the new airspeed-hold function. It works through a new airspeed bug on the PFD controlled by a dedicated knob on the face of the DFC90. We commanded 100 knots at the FAF and chopped the power. The DFC90 held 100 in the descent just fine, but had trouble when we powered up and punched ALT to level off, dropping to as low as 89 knots before speeding back up.

This is probably a result of the DFC90 installation retaining the existing servos rather than replacing them with high-speed-capable digital servos, like those found in a Garmin G1000/GFC 700 autopilot. Steve Jacobson, VP for Product Management, told us, “We agree DC brushless motors would be best. But for this mission, the existing servo motors are adequate … and they keep the installation cost down.”

Wed have to agree. We asked Jacobson if future plans included digital servos and got a polite “no comment.” Such servos would probably only be for new OEM installs, however.

On our flight, Jacobson pointed out that the airspeed bug has a safety function, too. He leaves it parked on Cirrus best glide speed of 88 knots. If the engine were to fail, the autopilot could hold 88 knots in a slow descent with one button push, while the pilot got busy with the emergency checklist.

Bigger news is the Straight-and-Level button. Similar to the Level button on the G1000-based Cirrus Perspective system, if a pilot gets into an unusual attitude, pushing the button engages the autopilot and returns the aircraft to level flight. Officially, Avidyne states it has demonstrated recovery from 60 degrees of bank and 30 degrees of pitch. Given that part of the recovery logic includes knowing to unload the wings before attempting an extreme roll and not exceeding more than 2.3Gs on the pullout, we suspect its designed to attempt much more extreme recoveries if needed.

In addition, the autopilot wont let the aircraft fly too slow or too fast. We pulled the power to 35 percent and commanded a climb of 1600 FPM in the SR22 testbed aircraft. It pitched up in an attempt to climb until it slowed to 88 knots. At that point the automated voice (they call her Gina) announced “Speed protection active” and annunciations flashed on the PFD. The aircraft gave the best climb it could without slowing down any further. We tried a full-power descent as well, and the autopilot held us at Vne, pitching up as needed to keep us from going any faster.

Avidyne retained the hidden turn coordinator from the original S-Tec installation as a fault comparator. If the DFC90 sees a mismatch between the PFD attitude and the turn-rate information from the old system, it will disengage and alert the pilot. The pilot can manually reengage the autopilot if he feels the error was in the turn coordinator rather than the PFDs AHRS.

There is some redundancy loss. In the event of AHRS or PFD failure, the S-Tec 55X could still fly the aircraft through an non-precision GPS approach. With the DFC90, AHRS failure will disable the autopilot as well.

The buttonology of the DFC90 will be familiar to anyone who has used an S-Tec 55. This is by design as Avidyne wanted the simplest transition possible for 55X owners. There are a few new buttons in addition to Straight-and-Level. Airspeed mode is engaged through an IAS button above the knob that sets the airspeed bug. Theres also a new GS button to manually disengage glideslope capture if you dont want vertical guidance on an LPV or ILS.

There is an Approach button, but its only really needed for VOR approaches, as the autopilot automatically sets its approach sensitivity and arms vertical capture if it sees you are flying a GPS approach or intercepting a localizer. Likewise, there is a GPSS button, but it engages automatically if youre following a GPS course. Maybe Avidyne figured 55X experts would miss the double-NAV push to engage GPSS.

Forget about pushing VS and ALT just right to climb and capture an altitude. If the press of VS and ALT overlap at all (and in any order) the aircraft will climb at the set rate and level off at the target altitude. The same is true with HDG and NAV. Gone as well is the gradual transition to 300 FPM at altitude capture. The commanded rate is kept until the last moment that still allows a smooth capture. Theres no knob to correct the altitude in 20-foot increments. When you change the baro setting, the DFC90 corrects the altitude automatically.

The autopilot buttons and the PFD display are color coded: green for active, blue for armed and white for inactive. The DFC90 also has a pitch and roll mode where it will hold the current pitch and bank, as well as a true flight director. In fact, like traditional attitude autopilots, the autopilot controls really drive the flight director, which you can follow manually or have the autopilot follow on its own.

Cirrus owners can upgrade to the new system today. Avidyne plans to certify the autopilot in all airframes where a significant number of Entegra systems were installed (Adam A500 owners may be out of luck). The system relies on the Entegra PFD, so there are no plans to create a standalone version for the aftermarket.

The DFC90 is $9990. The modification to the PFD to send new signals on the old S-Tec wiring harness is $3600 if youre already running Release 7 software. Its $5800 for earlier (non-WAAS) PFDs. Installation runs between three and six hours including removal of the PFD, for the upgrade and the flight test.

That means between $14K-$16K for the complete job. For some, the safety enhancements alone will be worth it. The day-to-day performance gains will sway some more buyers. But we think for many this upgrade is far from an easy call. The new autopilot doesnt add more mission utility. Aside from the envelope protection, the old system can do most of what the new one can-albeit with the grace of Jerry Lewis, at times, rather than Fred Astaire.

But if youre tired of cursing the shortcomings of your 55X, at least you have options, and the final result wont disappoint.