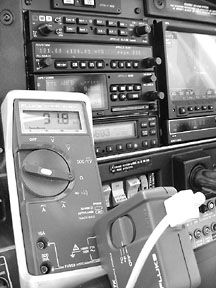 When it comes to avionics, heat is a bad thing. Very bad. The greatest single contributor to increased reliability for all modern avionics is to limit the maximum operating temperature of the individual components, particularly when theyre mounted in the close quarters of the typical instrument panel.

Its no wonder that this school of thought is spelled out in most avionics installation manuals, regardless of the brand. And we agree with the philosophy. As youll see from our testing, avionics stacks get darned hot. In many cases, too hot to touch.

Weve recently fielded many questions from readers regarding avionics cooling. And while we pack our panels to the hilt with fancy color displays, were surprised at how many owners are on the fence when their shop recommends a fan. There should be no hesitation, in our view. A fan is just too cheap to ignore.

In the overall scheme of things, the addition of a decent avionics cooling system is a small dollar hit compared to the cost of a major upgrade. Most owners havent a clue as to what they have for cooling and what the system really does nor do they have a sense of the abuse the radio stack suffers when it isnt cooled properly.

We wont bore you with geeky tech talk about the science of heat transfer and dissipation, small component breakdown and so forth. But we will give you a short primer on the subject and some advice and choices on what kind of cooling system/fan to consider. And if you dont have a fan now, we strongly urge you to consider one.

Formal Cooling?
Do you really need a fancy cooling system, with ducts, outside air and a huge fan? In most cases, not really. On the other hand, you cant ignore the problem, either. A few manufacturers tell you flat out: No cooling, no warranty.

True, modern avionics are more efficient and advances in design have reduced the heat problem. Yet while new gear is designed to run cooler, we keep packing too much stuff into too small areas and whatever gains we have from improved efficiency, we have lost to constricted airflow.

Water Cooling?
One way to cool the avionics is to pipe outside ram air into the stack via air scoops from the side of the fuselage. In the early days, this was a common design and we suppose something is better than nothing.

We also have to wonder what the manufacturers were thinking. We like to think of this outside air method as water cooling and this has proven to do more harm than good. Since unfiltered outside air will obviously contain moisture at times, directing this cool air into the back of your avionics is cruel and unnecessary punishment.

We had an old Skyhawk come through our shop not long ago with a King KX155 navcomm problem. When we removed the unit, the entire rear of the chassis was clearly water damaged and corroded and further inspection revealed dead insects lodged in the circuit boards. A sad sight indeed, with the metal on the back of the unit discolored to a shade of green and actually starting to rust.

Its no surprise that most of the electronics in this airplane needed constant attention. While the owner can spend upwards of $500 to replace the radios gas discharge display at regular intervals, the installation of an avionics cooling fan would be an easier solution. We have found that certain aircraft with continuous or otherwise excessive radio problems are those with inefficient or non-existing cooling or those that pipe an outside ram-air source into the stack.

What Fans Do
The fan re-circulates cabin air and forces it through the radio stack. The air is relatively clean if you dont smoke. (Dont laugh, we know the pilot of one corporate chariot who smokes cigars while flying. We suspect the radios look and smell like it, too.)

The fan blows the air through its ports, through a cooling tube and into the rear of the avionics. How much air? The popular three-port Troll FN200 Icebox ($199.95), for example, is specd to move 7 cubic feet of air per minute, per port.

You can get more push if you cap one or more of the ports. The same company makes a five-port model for big jobs ($275) and also a single-port for cooling a single GPS ($139.95). Ameri-King, another popular fan manufacturer, makes a wider choice of output options, some with two ports.

And does the brand of fan really matter?

Yes, it probably does. Were reluctant to recommend a certain brand of fan for a few reasons. First, we have heard very recently from readers who report difficulty obtaining FAA approval for the installation of an avionics cooling fan in their airplanes. We scratch our heads trying to understand why, but since many airplanes didnt roll off the assembly line equipped with an avionics fan, the installation of one is a major modification and requires field approval.

Our advice is to have your shop recommend a fan that makes the local FAA FSDO happy and fits the application. We like the proven track record of the Troll equipment and the serviceability and proven reliability of the Bendix/King model KA33 blower ($580).

The KA33 is a heavy-duty multi-port fan and its field serviceability is easy. The DC motors can be acquired and replaced with relative ease when they burn out.

Sandia Aerospace is another popular brand that has a design very similar to Troll. There are also some off-brands that appear to have cloned the major brands with similar designs. Reliability is the key, as accessing and replacing or repairing a fan can be a surprisingly expensive hassle. And if the fan quits, your equipment is on the line.

Sweaty Secrets
We did an experiment of our own to see how hot a radio stack really gets and how well the fans cool things down. Even we were surprised at the outcome.

We used a Fluke 77 series multi-meter and plumbed in a model 80TK thermocouple module, using a few different variations of probes. We tested a few types of aircraft both in flight and on the ground, trying to simulate real-world situations such as long ground idle waiting for clearances, lengthy run-ups on a steaming hot day and so on.

A Cessna 210 equipped with modern gear including a Garmin GNS530, a digital transponder and some older Cessna electronics gave us a probe reading of a toasty 120 degrees F in the middle of the main stack, directly above the GNS530, on the ground with an outside air temperature of 90 degrees F.

With a Troll FN200 three-port plumbed into the 530, transponder and an older navcomm, we were able to cut the temperature to around 105 degrees F. Of course, once airborne and climbing through OATs in the lower 80s and 70s, the cabin got more comfy and so did the radio stack.

Another test aircraft, a single-engine Piper with GNS430, transponder and digital navcomm fed by the same FN200 produced readings around 90 degrees F on the ground with OAT in the low 80s. Its obvious that the tighter the stack, the hotter the temperature gets. The hotter the cabin, the hotter the stack. This is a good excuse to install air-conditioning.

Sorry UPSAT…
We love UPSATs Apollo equipment and think its a well-designed line of gear but we disagree with the companys claim that the suite doesnt need cooling and well tell you why.

The equipment is designed to generate less heat than other manufacturers stuff but when you cram lots of equipment in a tight panel, youre going to generate heat.

The first full UPSAT suite installation that we completed was in a Cessna Cardinal and included the MX20 color MFD in the middle of the main stack, with other stuff packed on both sides filling every possible vacancy on the panel.

Per the installation instructions, we didnt install an avionics fan. In fact, the mounting racks arent designed to adapt to a cooling hose. Once summer arrived, the owner called and reported that on long trips, the MFD display got so hot that it could burn the skin on his finger. Exaggeration, we thought. Turns out he was right. In outside air temperatures above 80 degrees F, the entire stack was blazing hot. Its a cinch that the unit wont last long operating that way.

We got creative, installed a multi-port fan and forced air between the racks to circulate cool air.

This helped quite a bit and now all Apollo suites we install get cooling. We salute UPSAT for designing the stuff to be installed without a fan but simply put, we think its foolish to put it and other existing equipment at risk of being damaged by excessive heat.

UPSAT also advises to leave spacing of 1/8 to 1/4-inch between mounting racks to allow heat escape. Good idea. While we agree that overall the Apollo stuff runs cooler than others do, it gets hot while in the company of older gear. Plan on a fan for all but the most minimal installations.

Conclusion
The conclusion should be obvious: Youd be crazy to spend thousands on new-age avionics without an avionics cooling fan to keep from frying your expensive investment. The magic number to interface a multi-port avionics blower in the average GA aircraft falls around $500, depending on mounting.

Some aircraft are tight on behind-the-panel space so some equipment might have to be moved to accommodate the fan. Larger aircraft, such as twins, are more accommodating since the fan can be mounted up in the nose instead of buried in wiring bundles under the panel.

In any event, youre doing your avionics a service by keeping them cool and dry with a properly operating avionics cooling system.