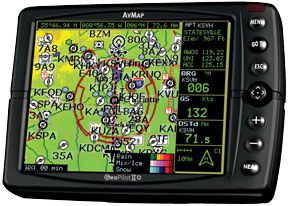 The Italian Multinational GPS maker AvMap has enjoyed some popularity over the past 14 years with products known for rugged designs and large, brilliant screens. When we first reviewed the color EKP-III series in 2004 we found it to be a durable workhorse that earned its place in tactical airborne law enforcement applications and was equally at home as an electronic knee pad navigator in civilian cockpits.

While the product line evolved since then, AvMap lacked satellite weather until now. We selected the $1199 GeoPilot II Plus for this review because its the latest offering from AvMap and we wanted a look at its weather, but other products in the AvMap line, including the EKP-IV-series can now play with the popular and

But WX or not, we think the GeoPilot II Plus excels in many areas and might be overlooked by the masses of qualified buyers.

The 13-oz GeoPilot II Plus measures 5.5 x 3.9 x 1.4 inches and uses an integral, 20-channel Sirf Star III WAAS GPS receiver. Lock-on is fast and solid, even using the built-in antenna although an optional remote antenna is available. In our testing, this receiver locked on more quickly than we were ready to roll and never lost the lock. The five-inch diagonal screen is crisp, but an auto-brightness feature that constantly fine-tunes the display intensity we found annoying at times. Our fingers searched for a dedicated brightness key, but it just isnt there. Pressing the Near button for one second accesses a manual adjustment. Theres also a night mode, for night-vision comfort.

A sturdy suction mount comes with the navigator. While mounting to the windscreen works, it partially blocks the view outside. We wish the unit came with a yoke mount as standard equipment. There is an optional rail mount, a pod mount as well as other aftermarket mounts, available from RAM. Air Gizmos makes a docking station and a dedicated bracket to house the WxWorx receiver.

The six bezel keys and joystick are relatively easy to use. We found the units menus and submenus intuitive once we were acquainted with the logic set. This isnt to say we didnt stumble a bit, but backing out of menus and pages is accomplished simply by pushing the Esc key. The Near button is a power On/Off

key, controls display and bezel lighting, and as the name implies, displays the 20 nearest objects including private airports with runways at least 500 feet long. The side-loaded SD card with Jeppesen data provides the expected airports, VORs, NDBs, intersections and airspace data. Theres also Airway function, which allows you to key in and go to an Airway, published GPS approach fixes and TAWS-like terrain and obstructions.

And when the landing includes a GPS approach, simply pressing the Go To button while on the map page brings up a menu that allows selection of available GPS and overlay approach waypoints for automatic sequencing. You can also access approach mode from the Flight Plan page (the unit can store 15 plans, with 100 legs in each). Flight plans can be built by using the cursor and plucking waypoints from the map.

We flew a GPS Rwy 2 at Hartford, Ct., (KHFD) using the AvMap as primary guidance (in VMC, of course). Oddly, the on-board Garmin GNS530W flagged a signal integrity message just outside the FAF (degrading the approach) while the GeoPilot offered flawless guidance with WAAS availability. Steering using the GeoPilot kept us on the inbound centerline all the way to the MAP. Speaking of steering, the unit comes with a serial adapter intended for autopilot interface. The FAA forbids any portable device to be interfaced with autopilots installed in certificated aircraft, but if you have a LSA or experimental, go for it.

A cursor mode lets you pan around and evaluate the lay of the land outside of your destination waypoint. Place the cursor over an object on the map and a dialogue box appears, offering information. For example, a VOR would show the name of the station, its frequency and the elevation of the terrain in which it sits. In fact, you can move the cursor over any part of the land map and a dialogue appears offering the approximate elevation. Simply press the Esc button to return to home mode. The cursor can also be used to create and edit waypoints, identify airspace, measure distance and project radial lines. The Airspace Predictor function allows a before-hand look at airspace youll encounter along your route.

We cant cover all the configurations and features of the map in this space, but the feature-rich flexibility is why the brand has been popular with law enforcement and other airborne authoritative users. It focuses on precise situational awareness and map planning.

Weather graphics are crisp and well-defined due to the units crisp display. It initially took some doing to get the WxWorx receiver talking to the AvMap, but this was straightened out by an AvMap representative. The only piece of educational documentation that comes with the system is a “quick guide,” which covers the extreme basics of button pushing. We had to download the documentation from the AvMap web site.

Once we got the weather data to play, it offered the same XM reliability as one

would find in any interface. As one would expect in a modern portable there are flight calculators for fuel consumption, winds and trip planning, as well as checklists and VNAV descent profile which adds useful data on the HSI presentation.

Airway functionality was less intuitive than we expected. They are outlined in a light shade of blue on the map display, so in densely populated portions of airspace they blend in with other features on the map. Low airways are part of the Jeppesen database and a menu option lets you go to a specified airway. This highlights the airway, making it easier to see.

We used the select airway function and navigated toward the well-worn V1 in southern Connecticut, and our position agreed with the on-board Garmin MX20s en route map. Once enabled, the quick info menu in the airspace submenu offers pertinent data about the airway. When the airway function is enabled, terrain is disabled.

The Nexrad is a static presentation only. AvMap told us they are working on new software that could allow for an advanced picture including motion. Theyre also working to add TFRs to the list of displayed weather product. Theres no XM radio functionality so if youre looking for tunes on the fly, youll be disappointed.

Well, thats not entirely true. Using the included audio/video patch cable the unit can play audio and video files-a feature we didnt play with-and can store photos. We say, leave this whistle to your iPod.

In a GPS world seemingly dominated by Garmin, other brands struggle to meet the mark. Its not that models such as the GeoPilot II arent worthy, theyre just overshadowed. While we hoped for features such as GPS-derived flight instruments, ground surface charting, Bluetooth connectivity and an included yoke mount, we found this unit to be a capable navigator with an excellent display and a to-the-point airspace and terrain minder plus airways and easy approach logic.

That said, with a street price of around $1500 (with the weather option) we wonder if buyers would be more attracted to Garmins $1649 GPSMAP396, a proven navigator that Garmin recently reduced in price. The company is currently offering $200 discounts to existing AvMap users, but if the company wants to tempt would-be Garmin buyers, they need to step up their marketing effort. We think GeoPilot II Plus is certainly worth considering.