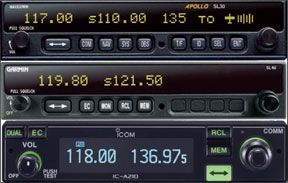 In the good old days, a big avionics installation consisted of a pair of nice nav/com radios. This was easy work for the shop when compared to todays high-speed digital interfaces. For the owner, an old-school, dual-radio upgrade meant dropping five grand or thereabouts.

Prices are twice that for new nav/coms. Shops often have to gut a rats nest of old wiring as well. The teardown-intensive task of replacing original antennas and coaxial cable means more airframe disassembly, increased downtime and a hefty addition to the owners bottom line.

Heres a rundown of what the market has to offer in modern nav/com radios, and a review of potential gotchas that should be discussed on the front end of the project. Well skip integrated NMS systems and cover traditional com and nav radios. Also keep in mind that whether or not your existing OBS or HSI (or PFD) is compatible with the new radio could swing the price by over $1500.

Arguably the industry standard for nav/com radios, the Silver Crown KX155 remains a popular choice for traditional nav/com upgrades. Enjoying a long production run, the KX155 and VOR/Localizer converter-equipped KX165 (for driving most analogue HSIs) has undergone several discrete design changes over the years-notably the switch to surface-mount circuit boards, which limits some field repairs. The KX155 is available in several flavors. There is a version that has an integral glideslope receiver board and one that only receives VOR and Localizer channels. A glideslope-equipped KX155 can drive a variety of nav indicators including the KI209, KI209A (for sharing GPS and nav on the single indicator), KI204 and most HSIs. Critical on all KX155/165s is the operating input voltage: 28 or 14 volts. If you installed a 14-volt unit in your 28-volt airplane, expect both the smoke show and the repair bill to be impressive.

When Cessna started building aircraft again in the late 1990s, Honeywell launched the Silver Crown Plus series and along came the KX155A and KX165A. These models only run on 28-volts, sport a more contemporary-looking bezel face and feature some features not found on legacy KX155s. But like vintage KX155s, they are available with and without integral glideslope receivers. If you have a 28-volt aircraft, the modern KX155A (or converter-equipped KX165A) is a step above a legacy KX155 and offers 32 programmable com channels, a built-in digital course deviation indicator and a feature Bendix/King calls Quick Tune-an RS232-driven interface that plucks frequencies from a KLN94 GPS database based on your position so you dont have to search for and load them yourself.

The unit can also be connected to a yoke-mounted frequency control button so you can increment channel tuning and move standby frequencies into the active window without reaching for the unit. Further, there is a timer function with stopwatch and a bearing-to and radial-from the station feature. The KX155A/165A series output 10 watts of communications transmit power and all current production units have 760 com channels. Oddly enough, the modern KX155A equipped with glide-slope costs $4089, which is less than $4289 for the older-styled 28-volt KX155. Youll need to buy a compatible OBS indicator, too, which could add another $1000 at least.

The budget Crown series, once aimed toward homebuilt aircraft applications, includes the KX125 nav/com and standalone KY97A-series com radio. These units have LCD displays that wash out in direct sunlight and dont view well from wide angles. The KX125 has a built-in digital CDI on its display, with radial readout of the station tuned. The KX125s claim to fame is that it doesnt require a remote OBS indicator (although, it can drive one). The KY96A is for 28-volt applications.

The 14-volt KY197A and 28-volt KY196A are higher-end standalone com radios (essentially, the com portion of a KX155 packaged in a slimline case). Unlike the Crown KY97A series, they transmit 10 watts of power, have frequency memory, sport gas discharge LED displays and carry a whopping $4550 list price. For this reason, theyre hardly a popular choice in standalone coms. Similarly, the $5161 KN53 is a standalone navigational radio (the nav portion of a KX155 packaged in a small footprint). In our view, the KY197A/196A and KN53 series offer high quality, but the smarter option is to purchase the all-in-one KX155, equipped with glideslope. Youll save money and panel space.

One last consideration is putting in the non-glideslope versions of the KX-155/155A. While this may save you about $600 in the short term, wed lean toward spending the extra, even in a VFR-only aircraft, just to have the option in a pinch.

Left over from the UPS-AT days are the $1895 Garmin-AT SL40 com transceiver and glideslope-equipped $4195 SL30 nav/com. These are slimline models that require little real estate -only 1.3 inches of vertical space in the avionics stack. The SL30 nav/com has become a popular choice for backing up a GNS530 or 430 NMS system, and offers modern performance in a traditional nav/com.

The SL30s claim to fame includes a digital DSP signal processor. DSP technology eliminates the unstable needle scalloping found with analogue nav receivers. Scalloping navigation needles can induce autopilot S-turns and the SL30 with its digital receiver offers solid reception. The catch here is the $2195 MD200-306, made by Mid Continent Instruments for Garmin is the preferred OBS indicator for saddling up to a SL30 (or most popular HSIs). The SL30 allows digital To/From, automatic display of stations ID by encoding the received stations Morse code and digitally decoded OBS setting on the units display. It has built in glideslope receiver and an eight-watt, 760-channel com transceiver that features automatic emergency frequency call-up, frequency storage, and National Weather Service broadcasts.

A feature found in both the SL30 nav/com and SL40 com transceiver is the ability to monitor the tuned standby frequency at a lower volume than that of the active frequency. This is much like having dual nav and dual com functions in a single box, and is handy for listening to ATIS, for example, without having to leave the active frequency.

Notoriously a robust competitor to the KX155, the Narco MK12D+ series enjoyed huge popularity in years past but its vertical size-2.5 inches high compared to a

The MK12D series interfaces with the ID825A OBS indicator and popular HSIs. A MK12D+/ID825A has a list price of $5224, and is offered in both 14-volt and 28-volt flavors. The MK12D/R flavor is designed as a plug-in replacement for ancient MK12-series nav/coms, as is the MK12D/Cessna Replacement for ARC-series radios, and can utilize most of the existing old wiring. But we think thats often a foolish plan. Old wiring and connections contribute to poor nav/com performance, and part of the intent of an upgrade is better audio quality.

Narco once manufactured the COM810-series standalone coms but they arent in the current line-up. They do make the NAV122D, a standalone nav radio/OBS indicator that can display GPS course information and has integral glideslope. It mounts in a standard 3 1/8-inch instrument cutout and retails for $5320.

As we go to press, Narco has announced a relationship with XCOM Avionics, an Australian firm that markets the VHF 2.5-inch com radio. Its a design popular in the experimental market. According to a recent Narco press release, Narco will manufacture, inventory and support the unit in the future.

With roots planted deeply in the amateur-radio world, the $2316 Icom IC-A210 panel-mounted transceiver sports a modern design and rugged controls. Its slim, too, measuring about 1.3 inches high and weighing about two pounds. It outputs eight watts, offers liberal amounts of frequency storage, NOAA weather-channel frequencies and a “dual watch” function allows monitoring two channels at the same time. It can also name a stored frequency using six-characters for easy recognition.

A voice-activated two-place intercom is standard when wired accordingly, making the A210 a good option for LSA and small experimental aircraft. The A210 has an

organic light-emitting diode (OLED) display which offers a wide viewing angle with high contrast and brighter segments. Select GPS receivers can be connected to the unit via RS232 interface for transferring frequencies into memory, similar to the Bendix/King Smart Tune capability found on the KX155A series.

German-made Becker Avionics offers the 760-channel AR-4201 com radio. It mounts in a 2.5-inch instrument cutout, which can save valuable space. It can store up to 99 frequencies and has low current draw, making it a popular choice for LSA models with minimal electrical systems. Further, a bus voltage monitor is a useful feature that other units on the market should incorporate, in our view. The unit can be wired for simple intercom operation and has dimmable backlighting. We flew behind the AR4201 in a new Aviat Husky a while back and were impressed by its rugged design-tested when we nearly put a steel-toed boot through its faceplate while exiting the aircraft.

On the low end (well stop short of calling it bottom-feeding as the owner of a flight school did after installing one in his trainer) is Val Avionics. The Com760 is no longer produced, but is out there and is still supported. Priced at $895, its tough to complain about a unit that has digital display, auto-dimming, auto-squelch, an eight-watt transmitter and FAA TSO approval. It weighs three pounds and occupies just shy of 1.5 inches of vertical stack space.

A step up is the $1295 Val Com2000. Its a space-saver measuring an inch high and weighing three pounds. Channeling the Com2000 is accomplished through concentric tuning knobs, rather than those silly toggle switches. We couldnt find any installations of the Com2000, since the unit was just introduced this summer. It could be the smallest stack-mounted com out there.

If a modern nav/com with all the bells and whistles has appeal to you, we recommend the SL30. Its a proven design with useful, real-world features in a footprint that conserves panel space. For a com radio only to back up a GNS430 or for replacing an older com in VFR airplanes, consider the SL40 or Icom A210.

If panel space isnt a consideration, a legacy KX155 should serve most missions well. Its rugged, reliable, a no-brainer to operate and used units are out there in decent shape. The modern KX155A is worthy given its extra features, in 28-volt applications if you prefer the King look and interface to the KLN94 for frequency tuning. From our experience, both are feature-rich, rugged, decent performers that wont break the budget.

Lastly, consider units that offer convenient repair options. Finding local service for a Becker could present more challenges than finding quick repair on the industry-standard KX155. Not that Becker factory service is bad-its just less convenient than quick-turn field repairs. Similarly, Garmins SL-series will likely require a trip to the factory for repair when it breaks. But our experience is that Garmin steps up to the plate with loaners.