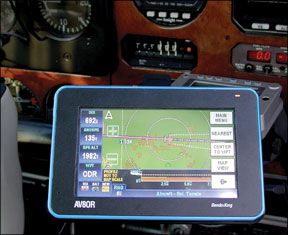 In the good old days of portable GPS-about 1996-when a half million pilots were still making do with panel-mount loran, every new product introduction ignited a feeding frenzy of buying. Garmin, IIMorrow, Lowrance, Magellan and Trimble (remember them?) had a field day pouring portables into a bottomless pit of demand. But staid Bendix/King, the ruler of all things panel mounted, was never a serious player. So the last thing we expected from the company at this years

AirVenture was a new portable, never mind an entire line of three, two of which are high-dollar EFB products. (See sidebar on page 11 for a glimpse of those.)

The eye-catcher was the bottom of the line, the $749 AV8OR Handheld that sports a GPS moving map with weatherlink, touchscreen control, built-in ground navigation and MP3 and movie players, all in one compact package.

As you might imagine, the box containing this thing has a bunch of parts and pieces, including the receiver itself, the power cabling, yoke mount, car mount, chargers, earbuds, a carrying case, plus all the stuff necessary for the XM-based weatherlink. That hardware, by the way, is a $450 add-on extra that brings the total price of the package to just shy of $1200 retail, but discount prices are lower. Even though some assembly is required, thats a lot of stuff and capability for not much money. In fact, it keeps pace with the Garmin GPSmap 496 for half the price, even if it might not do some things quite as well.

The basic unit itself is a purpose-built display/navigator/player that measures 5 by 3 1/2  inches and is less than an inch deep. Its kind of beefed up iPhone, with a display size of 3 by 2 3/16. Screen technology is backlighted TFT at 480 by 272 pixels-its sharp enough, but not super sharp. Unusual for this class of product is a removable lithium ion battery that snaps under a cover on the back, with an optional high capacity battery. But battery life is short-under three hours-so this thing should really run on ships or vehicle power. The controls are arrayed around the outer perimeter of the device and include a menu key, a volume knob and jacks for earbuds and USB/external audio. The AV8OR has an internal GPS with its own antenna and it also has an external puck-type antenna. We couldnt get the internal antenna to work correctly, but the puck performed well. Similarly, for XM datalink weather, it requires either a portable WxWorx REWX91D XM data receiver or Bendix/King KDR610 certified weatherlink box. The portable can connect via RS232 hardware or Bluetooth, but the weatherlink receivers needs its own antenna and power. Discounted, were seeing the bare AV8OR selling for $675 or $1135

The acid test of any new equipment is setting it up without consulting the manual. The AV8OR passed that easily enough, but theres a lot of setup to do-GPS antenna wire, external power cable, power and antenna for the weather box and the yokemount. Hardware wise, two complaints: The GPS antenna jack is small and tender; we wonder how it will hold up. Second, the yokemounts plastic retainer lacks spring tension and requires a difficult-to-negotiate snap/tab arrangement. Were not sure how that will hold up, either. The AV8OR can run on its 3.7 volt removable and replaceable lithium ion battery, but plan to run it on ships power, especially if you want to use the weatherlink.

Screen navigation and control is entirely via touchscreen. A tiny 2 -inch-long stylus is provided but, in our view, these have no business in the cockpit. If they get dropped-and they will get dropped-theyre gone forever. Fortunately, the AV8OR can be controlled almost entirely by finger jabs and is just as responsive as an iPhone is.

Virtually everything is done through menus and softkeys right on the touchscreen, with the exception of a master menu controlled by a hard button. Push that one and the device gives you the choice of GoFly, GoDrive or basic system settings.

From the GoFly function, you can pull up a main menu with map choice, flight plan functions, the weather setup and more basic system setups. All of this seemed self-explanatory to us. Some of the menu choices are too small to select with a finger, but you can use the stylus or-gently-a pen.

The AV8OR is a decidedly VFR gadget with map display variation limited essentially by terrain depiction choices. Although the database contains airways and approach intersections, plus VORs and NDBs, it doesnt have approaches, so it gives up that capability to Garmin. (Not a big loss, in our view.) It does have terrain information in the form of topography and obstacles selectable as optional map details-these can be toggled on or off. It also has something called SmartProfile, which depicts the flightpath in profile view relative to terrain. This appears as a small icon along

the bottom edge of the display. Display quality is adequate, but suffers a little for its low resolution. At the smaller map ranges, details appear blocky and some colors appear pixelish. This doesnt hinder function, but it doesnt look as nice as the Garmin displays do.

One advantage touchscreens have over key-driven displays is a virtual keyboard and at this, the AV8OR excels. Weve grown quite weary of Garmins decades-old rocker-key method of keying in data. Its long overdue for a revision. The AV8OR handles this nicely by giving the entire screen over to a QWERTY keyboard. If you want to fly direct to a fix, for instance, touch the screens direct-to key, then type in the identifier and hit enter. Its almost as convenient as using a computer.

Flightplans can be set up the same way, by entering a string of waypoints or, if you prefer, selecting them directly from the map and lacing them together into a completed flight plan. These can be stored, inverted and edited, as necessary.

The touchscreen yields another feature called the pointer function. If you touch the screen anywhere off any of the softkeys, it activates a pointer that immediately gives bearing and distance from your position, plus the lat/long of the touched point. This also invokes a slew function that allows you to pan around the map as far as youd like to go. If you touch a screen feature, say an airport or airspace boundary, you can immediately call up data such as frequencies,

elevations, fuel type and the like. Theres a softkey button to clear the pointer feature to return back to navigation.

The AV8OR also has a built-in MP3 player and video player, with an internal speaker and a jack for external earbuds or an audio jumper. The MP3 can run while the unit is in nav mode and the volume can be controlled by a physical knob on the side of the case. MP3 and video files are loaded through a USB port-the AV8ORs SD card appears as just another drive on the computer and you can drag and drop files. The SD card can also be removed and accessed via card reader. This process was quick and seamless.

In our view and pending feedback from users about the typical new-product bugs, the AV8OR looks promising. If it proves durable and robust, its a better value than the Garmin GPSmap496 for doing air and ground nav while also offering weather datalink. True, its a hassle to mess with the wires and bits and pieces and the display quality isnt quite as good. It also lacks Garmins IFR features and the flight instrument function. But the AV8ORs interface and logic are simpler than the Garmins, its better at ground navigation and, well, cutting to the chase-its less than half the price.

Well reserve final judgment until weve done more testing and we also intend to look at another contender, Anywhere Maps new ATC, which sports similar features and is probably the real competition for this product. Still, were happy to see someone give serious competition to Garmin and we may see some price movement as a result.