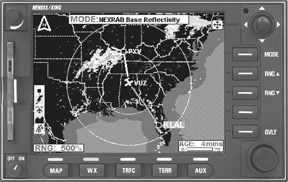 As we reported in the September 2002 issue, choosing an aircraft datalink system isnt getting any easier. There are too many players to pick from and its still too early for the inevitable shakeout.

If youve already invested in the Honeywell/Bendix/King IHAS (Integrated Hazard Avoidance System), the natural selection will be the Bendix/King KDR510 datalink system. Its the only system that will play on the Bendix/King KMD550/850 series MFD display so if youre already IHAS equipped, you have no other choice.

We dont think this is a bad thing because the Bendix/King system performs well or at least as advertised. But it does limit flexibility.

Ground or Air?
Critical question: do you want your weather available in the air or will you want both air and ground access? If the latter, the Bendix/King Wingman Service-the overall product name of this service-isnt for you. It consists of a ground-based network of VHF transmitter stations that continuously broadcast weather data but in most cases, youll need to be airborne to catch the signal.

Unlike other systems, however, theres no need for the pilot to manually request the weather; its broadcast continuously to the receiver. Currently, you get NEXRAD radar, graphical METARs, pilot reports and TAFs. NEXRAD base reflectivity and graphical METARs are repetitively broadcasted at least once every five minutes.

In our opinion, the most useful weather product is the down-to-business NEXRAD graphics which are overlaid right on the KMD map display. Textual weather is helpful, yes, but the radar pictures will pull your fat out of the fire on a convective day.

Since the signal is broadcast from the ground, line of sight to the transmitter is required for reception. From what weve seen and heard from regular users, youll need to be at least 5000 feet AGL to get a reliable signal. The ground-based network is just about complete and while the system is still being filled in out west, the eastern portion is built out.

We flew a single-engine Cessna in eastern Connecticut and were locked on to the Long Island-based ground transmitter climbing through 4700 feet. Coverage was rock solid and although the local weather was severe clear, we could see nasty stuff 150 miles away in upstate New York on the NEXRAD imagery. On our descent for landing, the system went off-line passing through 4800 feet.

Installation Issues
As noted, youll need a Bendix/King KMD550/850 MFD to play this system. The KDR510 datalink receiver is linked to the display via the KAC 503FIS (Flight Information System) module. The module lives inside the display hardware. Since the KDR510 is a 2 by 5 by 8.75-inch behind-the-scenes box, it contains no operator controls.

Instead, weather selection is done on the multi-function display itself, via menus and a joystick. RF input is connected to an external VHF communications antenna, which means you have to hang another whip-style antenna in your antenna farm.

Find an installation facility thats experienced. Antenna placement is important and it should be at least three feet from any other VHF antenna and from other areas of the airframe that might cause detuning, such as gear doors. The datalink system receives a signal in the 136.00 to 136.975 MHz spectrum in 25 kHz channels and is sensitive to noise.

Bendix/King has acknowledged noise problems generated by ignition harnesses so its no surprise that a noisy harness can deteriorate the range and performance of this VHF-based system. Weve been told that replacing an existing harness with a Slick harness should solve any reduced range problems.

The remainder of the installation consists of mounting and wiring the receiver, which is suitable for any voltage. It can be mounted anywhere itll fit. In most twins, the best choice is in the nose and in singles, it goes in the tail avionics bay.

Display
NEXRAD graphical data is displayed on the map and the user can zoom in on a specific area to get a more detailed weather picture or zoom out to display a wider range. Precipitation intensity is depicted via standard colors- green for light, yellow for moderate, red for heavy and magenta for intense.

The age of the NEXRAD is posted on the lower right corner of the screen. Since NEXRAD is highly processed, images take a few minutes to reach the cockpit. (Honeywell says the average age is six minutes.)

NEXRAD base reflectivity doesnt provide a detailed enough picture to determine cloud layers nor is it possible to differentiate various types of precipitation. No surprise then that Bendix/King openly states that NEXRAD data shouldnt be used for strategic planning or tactical avoidance of weather.

We believe that some buyers of datalink technology are misinformed in thinking that they can finally throw away their ship-based radar and rely on this technology alone. We dont think that will be practical or possible.

But users will find that NEXRAD is more sensitive than airborne radar and will paint precipitation that the onboard radar simply wont see, thus having both datalink and ship-based radar will be useful for some owners.

Graphical METARs are shown using box-like symbology next to the appropriate reporting stations ICAO identifier. The top box indicates reported ceiling while the lower box shows visibility. These too are color coded and a METAR legend indicates flight category; VFR is depicted in light blue, IFR in yellow, marginal VFR in green and nasty, low hanging stuff in red. The intuitive joystick control on the KMD display steps you through menus, making the system easy to navigate. Moving the cursor over a specific identifier and pressing enter calls up detailed data for that station. Simply pressing the OVLY button overlays your active flightplan over the weather. A dedicated WX key puts you into weather mode. From here, you can select Stormscope lightning data, if you have a WX-500 remote Stormscope, or you can call up datalink by selecting the FIS page.

Thanks to well-labeled menu prompts and the joystick, switching between any of the modes is easy once you get the hang of the logic. This is good, because in its most complete form, the IHAS system provides traffic, terrain, weather and several navigational modes. Theres a lot going on and we think Bendix/King has done a good job of keeping the operational logic under control.

Conclusion
Its clear that the Honeywell/Bendix/King datalink weather system works as advertised. Its also clear that its still in the early stages of maturity and serious amounts of money have gone into the network.

According to Honeywell, future system enhancements will include icing and turbulence data, to name a few. The cost of the KDR510 hardware is $5546 and installation prices will vary dramatically, depending on the aircraft and existing antenna arrangement. Plan on about $8000, plus the cost of the display. (We didnt say it was cheap.) Cost of the Wingman service itself-by subscription-is $49.95 a month for graphical products. Text products are free.

NEXRAD and graphical METARS are purchased through subscription plans while text weather is free. But if you want any of this stuff on the ground before takeoff, better shop the satellite-based products from Garmin, Avidyne and others.

Also With This Article
Click here to view “Checklist.”