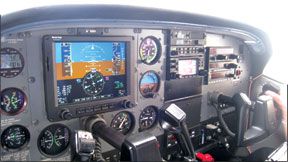 We asked Dan Barks, Business Director for GA Operators and Dealers at Honeywell, why this was a good time for Honeywell to offer an aftermarket PFD. His response: “Honeywell has been refocusing on GA with the Bendix-King line. We have stack avionics, portables, but the missing product was a PFD.”

That PFD has arrived with the Bendix-King KFD 840. The 8.5x7x7.3-inch unit replaces the traditional six-pack with a

display and functionality reminiscent of the older Avidyne Entegra PFDs. Thats not to say this is old technology-the hardware and display symbology is derived from Honeywells high-end Primus Epic cockpit suite-but the philosophy behind the KFD 840 is traditional: big PFD designed to play with navigators and an MFD on the center stack.

The KFD 840 does offer a larger PFD attitude display than either of the two major competitors, the Aspen EFD1000 and the Garmin G500/600. The screen is 8.4 inches diagonally and backlit with LEDs rather than a CFC bulb. Its bright and easy to read in direct light. Data shown in the lower half of the display, such as waypoint info or groundspeed, is drawn in good-sized numbers against a simple black background. Overall, we liked the display, with our only beef being that some of the fine lines on the HSI and attitude ladder were thin, perhaps one pixel wide, so they didnt appear to move smoothly, in our opinion.

There are two standard-rate bugs shown as triangles on the roll indicator that adjust with true airspeed. Tuck the roll indicator inside the bug and youre at a perfect bank angle for a standard-rate turn at your current true airspeed. This is definitely simpler than looking down to the turn rate vector that normally sits above the HSI on most glass panels. The roll pointer can also be reconfigured to sky-pointer mode if you prefer.

Two MFD-like tricks you can do with this PFD are checklists and weight and balance. The checklists are created by the owner and put on an SD card as text files. They can be any text you want and you can make up to 20 pages of them. The weight and balance function is still in development and is a bit more sophisticated. Its customized to the aircraft, and lets the pilot

The KFD 840 is almost a one-box solution. It contains everything except magnetometer, which must be mounted remotely to stay clear of interference from aircraft electrical systems. In aircraft that have slaved HSI systems, the magnetometer can likely be placed in the same location as the old flux valve. Line voltage for the KFD 840 can range from 11 to 33 volts, and the AML list covers most Class I and II aircraft built since 1980.

The system should play with most GPS and Nav/Coms out there, but is designed for Bendix-King avionics. For example, it connects directly with KX-155/165 Nav/Coms, but sports the standard ARINC 429 or RS-232 connections for other systems. One edge the KFD 840 has over the Garmin 500/600 is its ability to accept analog inputs from older Nav radios. Honeywell says the KFD 840 can replace the KAS altitude preselector that goes with KFC-200/250 autopilots. Compatibility and interoperability with other autopilots varies, so make sure your unit is on the list if youre thinking about a purchase.

There is no current system to offer a digital replacement to any autopilot gyros, such as the KI256, but thats in the works. So is a flight director that can replace the KI-256. Long-range plans include engine monitoring and synthetic vision.

Attitude data for the KFD 840 is not GPS or air-data dependent, but the unit cannot be reset while in the air either. While no battery backup is offered by Honeywell, the unit is compatible with the Mid Continent MD 420 emergency power supply, which retails for $2200.

While the large-area PFD might be a selling point to some, we dont necessarily see this as a benefit. Having flown behind both the Aspen and Garmin units, we feel the advantages of having an MFD display more in front of the pilot strongly outweigh any disadvantages of a smaller PFD display, especially with the Garmin G500/600 system.

combination of pushing the knob to cycle through the options and then twisting to get a value. It works, but we think its not as obvious or elegant as some other solutions.

Five softkeys across the bottom of the display control additional functions. The left two softkeys cause a menu to pop up, with some options two levels deep and controlled by a combination of two softkeys. This caused not only us some confusion on the demo flight, but also tripped up our demo pilot. The other three softkeys cycle through sources for bearing pointers or the main CDI with no pop-up menu. While the softkeys across the bottom center of the KFD 840 look nice, we found them inconvenient behind the yoke in the Cessna 182 test aircraft we flew.

Finally, a couple features seemed half-baked, from our perspective. You can create your own checklists, but theres no provision to check off items on the checklist. We also found getting the right checklist up quickly cumbersome enough to undermine its usefulness. When we shut down after our test flight, we were surprised to see the PFD go dark when we killed the avionics master. A check of the installation manual showed this was perfectly acceptable-but its not the way wed want it wired in our own airplane.

While the KFD 840 does everything you need from a PFD, we think it would be a tough sell at $16,985 plus about 70 hours labor for a typical install. Compare that to the analogous functionality of an Aspen EFD1000 Pro at $9995 or getting a PFD/MFD combo in a G500 at $15,995. (Those are retail prices, with street prices often two or three grand less.)

When we asked Dan Barks why a consumer would pay more for the Honeywell product, he suggested the ADHRS derived from the high-end Primus suite would be an attraction, as well as the large display. We dont agree. Garmin and Aspen have adequate time in service to show their products are up to the task, and, as weve already said, we see the advantages of a smaller display combined with an MFD beside it as outweighing the drawbacks.

Honeywell calls this the Apex Edge series, suggesting there are more products in the pipeline. The only one we know about is the KSN 770, which is in an all-in-one MFD/GPS/Nav/Com and should retail for $13,995. Were told the KSN 770 will be introduced next fall, but weve seen similar promised dates come and go with no announcement.

Well let you know if the combination of these units changes the picture once we fly them together. But unless Honeywell readjusts its pricing for the duo or adds some compelling features-including autopilot gyro emulation-we think Honeywell waited too long to plug the PFD gap in its GA avionics lineup.