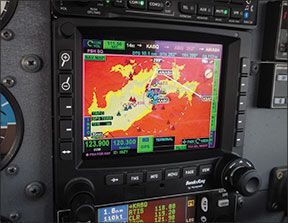 Five years. That’s how long the market has been waiting for Bendix King’s KSN770 GPS navigator. In the avionics world, a lot can change in five years, and that’s exactly what happened while the KSN770 was stalled in a lengthy R&D phase.

Touchscreen, ADS-B, advances in electronic charting and Garmin’s GTN-series navigators were a few notable changes that made the original KSN770 product nearly obsolete before it was even brought to market. Worse, the delay—and the absence of a fresh product line—created rumors that Honeywell was abandoning the GA avionics market.

Ultimately, it was a partnership with Aspen Avionics—a dynamic company that has a knack for developing and certifying successful products in minimal time—that pulled the KSN770 from the ashes of avionics extinction.

The collaboration between Bendix King and Aspen produced a product that we might expect. The KSN770 has a modern feature set and generous input/output capability that’s packaged in the robust hardware that Bendix King is known for. It’s also designed for future growth—that’s signature Aspen, in our view.

We recently visited Bendix King’s flight operations center in Albuquerque, NM, where we flew with the KSN770 and Bendix King chief test pilot Doug Hawley. As we go to press, the unit is expected to earn STC and TSO certification any day.

A Step-Up Hybrid
If you’re familiar with the Bendix King KMD540 MFD—the display that was part of the company’s Integrated Hazard Avoidance System (IHAS) suite—then you’ll recognize the KSN770 safety navigator, as it’s called, as a follow-on product.

Like the old KMD display, the bezel design of the new KSN770 has a rugged feel, although we’re not so sure how the joystick and cursor control device (CCD) will hold up in the hands of ham-fisted users, or in turbulence, for that matter. It protrudes from the lower right corner of the bezel, seemingly making it vulnerable to breakage. On the other hand, it’s a convenient way of entering data into the KSN770 FMS.

If you’re familiar with the Aspen Evolution PFD and MFD products, it might be obvious that Aspen had their hands in the user interface. That’s because the onscreen labels, soft keys and even some of the menu structure resembles that of the Aspen Evolution. We think that’s a good thing and so might owners of existing Evolution PFDs. In our estimation, the Aspen feature set is highly regarded for simplicity and ease of use. That isn’t to say the KSN770 will be an easy transition for everyone—especially those coming from Garmin’s GNS530/430 products. The KSN770 user interface is quite different.

The 10-pound KSN770 stands 5.25 inches high in the radio stack, which is roughly 0.75 inches taller than a Garmin GNS530. This is important because the target audience for KSN770 retrofits may be, in part, owners looking to upgrade from the GNS530. It’s simple—less reworking of the radio stack means lower labor costs. This can’t be said for the GTN750, at 7 inches tall.

The screen is a 5.7-inch active matrix LCD with a 640 by 480 pixel count. That’s full VGA­, and it strutted its stuff as we flew around the desert in the Cessna 182S. Sunlight is not a problem for this display, nor is heat. The unit monitors dual cooling fans that are mounted on the rear of the chassis. Should one or both fail, the unit flags a FAN FAIL message on the display—warning of pending overheating.

Bendix King believes that many pilots aren’t entirely sold on a total touch interface, so they designed the KSN770 with a combination of touch and hard buttons and knobs. This hybrid interface brings the best of both worlds.

For example, tuning the radio frequencies can be accomplished with an onscreen keypad or you can twist, turn and tune with a familiar concentric knob. Pushing it in activates the nav window for channeling nav frequencies, while the frequency transfer soft key makes the frequency active.

Speaking of radios, the onboard comm transceiver transmits 10 watts of power, and there’s an optional 16-watt version for jet applications.

We’re surprised the unit doesn’t have a discrete audio output channel for voice callouts and warnings. We think this could enhance the automation and should be present in a unit with this level of complexity.
hot keys, soft keys

Part of the hybrid feature set includes an intuitive structure of hot and soft keys, while the eight-position joystick knob is intended as the primary way of entering data.

Entering a waypoint identifier, for example, functions as you would expect it to. The left and right action of the joystick advances the cursor to the next available character in the identifier field, while turning it changes the selection of letters and numbers of the identifier field.

The joystick also serves double duty for push/select functions. During our trials, we had the tendency to either push it too lightly or too quickly, but once you get a feel for it, it works. The cursor control device, or CCD, comes from jet FMS systems, so it’s natural for Bendix King to include one on the KSN770, which was born from the company’s Apex FMS.

You could also enter data in a QWERTY pop-up window. The screen is resistive. Putting pressure on the surface with your finger or an object commands a given function. Bendix King says the touchscreen will easily work with gloves.

The hot keys are right out of Aspen’s Evolution flight displays. Hot keys sit along the right side of the screen and are aligned with and displayed adjacent to their corresponding soft key.

When configuring the map, hot keys and the corresponding soft keys are used to turn on and off various information overlays for each map. The best way to grasp the concept is to understand that hot means active, so the hot keys activate a function and turn green to indicate that the function is active.

Choose Your Map
Bendix King says the KSN770 was designed for both VFR and IFR missions, allowing flexible map display configurations. You can configure it for single-screen or split-screen view, add a single thumbnail view of traffic, for example, or two thumbnails for displaying both traffic and terrain. You can also select the view on each map screen—either a 360-degree or arc view.

The map can be configured for VFR or IFR (low or high airways) while traffic, terrain and weather—including XM data from Aspen’s EWR50 datalink receiver can be overlaid on each. The unit also interfaces with the L-3 WX500 stormscope.

Changing the map range is accomplished with dedicated soft keys on the upper left of the bezel. There’s also a map panning mode that’s controlled with the joystick. You can’t perform a two-finger pinch zoom, as you can with Garmin’s GTN navigators, or as we’ve grown accustomed to with tablets.

Georeferenced NACO charts—including taxi diagrams—are provided by Seattle Avionics. The chart display is accessed by pressing the MFD soft key and then toggling to the first page in the View menu, and then pressing the Charts hot key. The List hot key brings up a menu of available terminal procedure for a given airfield. The SEL, for select, hot key enables the chart viewing mode, where you can manipulate the chart by panning and zooming using the joystick or by using the touchscreen.The orientation of the chart is adjustable and there’s a day and night mode—either black text on a white background or white on black.

The TAWS view displays either advisory terrain data or enhanced ground proximity warning system (EGPWS). This includes the Bendix King KGP560 EGPWS and KMH880—which has TAS traffic and EGPWS in a single box.

Speaking of traffic, the unit can display a variety of TCAS, TAS and TIS systems, including Garmin’s GTX330/33 and Avidyne TAS. Traffic can displayed on a dedicated traffic page, in a thumbnail, and as a pop-up during traffic alert conditions.

FMS Navigation
At the core of the KSN770 is Honeywell’s WAAS-enabled GPS. As noted, the FMS trickled down from the Honeywell Epic/Apex GUI. The FMS is, of course, driven by a subscription-based database obtained via download from Honeywell’s Wingman data services division. Data is loaded into the unit via the USB port on the front bezel.

VFR pilots will find that single-point navigation is simple, especially with the Direct key on the bezel. Here you can select airports and navaids using the QWERTY keypad or by scrolling with the joystick.

In true FMS function, you can create and load an entire flight from departure to approach. First, insert the starting waypoint (which defaults to a nearest list) and destination. This builds a basic flight plan. The Procedure hot key advances to a dropdown menu of available departure, arrival and approach procedures. For a departure, select the runway, the published procedure and desired transition. From there, it’s back into the Procedure menu to select the desired approach and or arrival, with desired transitions.

Course and VDI information for GPS and raw nav data is displayed on a healthy variety of navigational indicators, including PFDs, analog HSIs and traditional indicators with OBS Resolver circuitry. A CDI hot key switches the course output from GPS and nav. In addition to displaying onscreen mode annunciation for approaches, the unit will output the data for display on a PFD. The current navigation source is displayed next to the radio tuning and display window at all times to provide an indication of the navigation source that’s being displayed. The system automatically switches the CDI from GPS to VLOC when an ILS approach procedure is active in the flight plan.

The system accepts a variety of analog and digital heading inputs, including the AHRS reference from Aspen’s Evolution and bootstrap synchro from the KCS55A HSI system. Heading input is required for computing GPS roll steering and for moving-map overlay of weather and traffic systems that require a heading reference.
The system is compatible with a variety of autopilot systems, but you’ll need to verify full compatibility with your system. During our flight trials, the KSN770 was interfaced with the rate-based Bendix King KAP140 and performed flawlessly on RNAV LPV, LNAV+V and ILS-coupled approaches.
back in the game

Based on our evaluation, we have no doubt that the capable KSN770 can appeal to buyers looking for an alternative to Garmin’s GTN navigators. We applaud the open architecture design that makes it easier to interface the unit with vintage and newer products.

Will the KSN770 put Bendix King back in the retrofit market as the player it once was? That’s possible, as long as a skeptical dealer network can recognize the product as one that’s equal to or better than Garmin’s offering. In some ways, we think it is. Contact www.bendixking.com, 855-250-7027.