We see plenty of fuel exhaustion events in the NTSB wreck reports, and we suspect some might have been avoided with fuel totalizers. These are valuable devices, especially when interfaced with panel GPS navigators, because you’ll always know how much fuel you’ll have to a given waypoint in the flight plan.

Better yet, if your long-term plan includes a big-screen engine and fuel monitoring system, you can likely still retain some of the hardware that’s used in a basic, low-cost fuel totalizer installation. Here’s a scan of the market.

WHAT’S IN THE INSTALL?

First, take it to the pros. Modifying the aircraft’s fuel delivery system isn’t for amateurs, and the proper install supplies are essential. This includes high-quality fuel lines and fittings, plus fire sleeving to protect the fuel flow transducer. We’ve seen catastrophic engine fires in some shortchanged installs.

A fuel flow transducer is an electromechanical device used in every fuel flow computer install. It converts the energy of the spinning turbine wheel to electronic signal pulses, which are passed along to a microprocessor and then displayed on a control head or on a GPS navigator, or even on some PFDs.

A misconception is that fuel totalizers measure fuel quantity. While that may ultimately be the end result (you first have to enter the amount of fuel that is in the tanks), a fuel totalizer meters the amount of fuel that flows to the engine. Think in terms of fuel endurance (based on flow) rather than fuel quantity. Fuel metering is done with a fuel flow transducer installed in line and prior to the fuel distributor or carburetor. The fuel passes through a small axial turbine wheel and past an optical sensor located inside the transducer body, which spins faster at higher fuel flows and slower at lower ones. A higher capacity transducer may be required for larger engines, including turbines and radials.

If you plan to upgrade to a big-screen engine display later, there’s a chance the transducer can be used in the install. Ask your shop about compatibility. It’s worth noting that transducers used by Shadin and JPI are manufactured by Floscan. These have proven reliability­, with metering accuracy, according to Floscan, within one-tenth of a gallon at a given fuel flow.

We like that the 2-inch LCD display-equipped FP-5L (and FP-5 without GPS interface) fuel totalizer is also approved for use as a primary fuel pressure indicator, since it has an additional data input channel.

That same channel can alternatively be used for displaying either EGT (which provides compensation for a displayed horsepower value during engine leaning), CHT, oil temperature, carb temperature, OAT, oil pressure, manifold pressure, instrument vacuum, bus voltage or amps. The instrument requires an optional Functional Module, which  is a 3 by 2 by 1 inch remote processor. It comes with the proper sensors and cables. You could connect multiple sources to the one channel and toggle through them with a remote control switch, but we think a full-up engine monitor is the better choice for the required effort.

As for fuel monitoring, Electronics International manufacturers its own fuel flow transducer, a device that EI says tames the displayed fluctuations in flow during changes in mixture settings. We like the automatic calibration mode, which fine-tunes the K factor (a critical setting during the installation) if you find inaccurate calculations of fuel remaining or fuel used since you filled the tanks.

The FP-5 and FP-5L each have seven display modes: fuel flow, horsepower, fuel remaining, fuel used since full, fuel used for the flight, time-to-empty, plus the aux channel. The GPS-compatible FP-5L has all the features of the FP-5, with four additional display modes: nautical miles per gallon, statute miles per gallon, fuel to the destination and fuel reserve. The bezel controls are straightforward, with dedicated fuel-to-destination and fuel reserve toggle switches, plus a Step toggle switch for moving through the onscreen data.

The FP-5 has decent capabilities, including pilot-programmable alarms that will flash the red low fuel warning LED, providing first- and second-time alerts. Low fuel and high/low fuel pressure annunciators are placed at the top of the bezel, directly above the main display. You can adjust the intensity of both the indicator lights and the LCD backlighting. The standard FP-5 system with transducer is $748 and the FP-5L is $649. You’ll need the $395 FFDM-1 fuel flow differential module for installation with a pressure carburetor. Visit www.iflyei.com.

The current Shadin product line includes the Microflo-L, which fits in a 2-inch instrument hole, the rectangular Miniflo-L and the Digiflo-L, a full 3-inch instrument available for both single- and twin-engine applications. Regardless of the model, we’ve always been impressed with the Flo series’ rugged bezel controls and bright LED displays. The computers can be configured to display fuel in gallons per hour (measured to a tenth of gallon, up to 100 gallons) or in pounds. 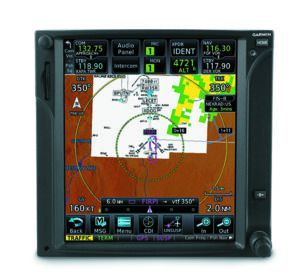 All of the Flo-series control heads offer the same basic functions. In single-engine applications, the current fuel flow is always displayed in one window (the Digiflo-L for twins has a dedicated flow window for each engine), while fuel remaining is shown in another window. You can also view the amount of fuel used and fuel remaining by pressing the REM/USED toggle switch. A rotary switch enables the display of fuel endurance (in hours and minutes), nautical miles per gallon, gallons to destination and gallons to reserve. Many of these functions rely on a connected GPS navigator source for groundspeed.

The Shadin AIS-380 RemoteFlo is a remote computer that communicates via an Arinc 429 or RS-232 databus to a wide variety of GPS navigators and remote displays. It measures 6.90 by 4.24 by 1.57 inches and weighs less than one pound. Mount it anywhere there’s room behind the panel, in a kick panel or in the avionics bay/nose of twins.

A staple in the company’s lineup, the Fuel Scan 450 (FS-450) mounts in a 2-inch instrument cutout and has a seven-segment LED display. What we like best about that photocell-controlled display is it always shows the current fuel flow on the top line, while it scrolls through other parameters on the lower portion, including total fuel used and the amount of fuel that’s remaining. It’s configurable to  measure in gallons, pounds or liters.

By default, the FS-450 automatically loop-indexes through five parameters, including the amount of fuel used since the last refueling, the amount of fuel remaining, endurance (the hours and minutes of remaining available fuel), the fuel required to the next active GPS waypoint and the reserve fuel that will be remaining when you reach the next active waypoint. The Step button allows you to manually freeze the display on any of these parameters, while individual annunciator lamps indicate which one is being displayed. Pressing the Auto button puts the unit back into scan mode.

We think the FS-450 has an easy yet interactive user interface. For instance, if there is a low fuel or an endurance alarm, the automatic scanning will stop and the appropriate mode’s indicator lamp flashes to acknowledge the alarm. Press the Step button to acknowledge, and the scan resumes.

The FS-450 is compatible with a wide variety of newer and vintage GPS navigators through its serial databus. It can also be connected to compatible portable GPS systems.

The FS-450 comes in several versions, including one for Rotax engines. The FS-450P for fuel pump-equipped engines (and the FS-450G for gravity flow fuel systems) is $750. Interfaces with pressure carburetors require two transducers, increasing the system price to $1045. There is also a version with a high-flow transducer for $1380. If you already have a transducer on the engine, you can purchase the FS-450 indicator and an interface harness separately.

The FS-450 with install kit is not approved as a primary instrument, and a model for twins is available for $1200. Contact www.jpinstruments.com.

From our experience using and installing all of the standalone fuel computers covered here, all will serve you well with high accuracy (with the right installation and setup) and reliability. We favor the Electronics International EI-FP series for its fuel pressure feature, and the Shadin products for their versatile mounting options.

If you don’t already have an engine monitor, get a quote for one with an integrated fuel flow computer. It’s an option (or standard) on nearly the entire line of JP Instruments engine monitors, as one example. If you have a JPI monitor, you can add fuel flow to it by installing the transducer and wiring.

Plan on extra labor with any installation for interfacing the fuel computer with the panel GPS. The shop will have to run a pair of serial data lines to the GPS connector, which means some teardown and reassembly.