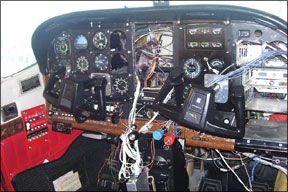 Over-the-top avionics upgrades are becoming less common than they were just a few years ago. In a time where the possibilities are endless, a scaled-back upgrade might be the only option. Owners are tightening their belts and realistically looking at their missions. The tanked economy couldnt have come at a worse time, given the availability of sophisticated avionics.

For the fiscally-challenged, hitting the avionics shop for a proposal on a total stack replacement will likely induce sticker shock. Even if you have the cash, loading half or more of the airplanes value into the panel could be questionable. The good news

is that equipping an airplane for light IFR need not break the bank-although forget about cheap. A solid cost-analysis of the available lower-cost options is necessary, which is what well summarize here.

What is your mission?

Consulting with a seasoned and respected avionics shop is critical. A good shop will listen to your needs, consider the value of the airplane for upgrade and suggest the correct equipment for your mission and skill. The shop should realize that, if an owner struggles with a huge button-pushing learning curve (which can happen quite easily in the current world of glass upgrades), the blame will partly fall on the shop that sold the upgrade. For some owners, less is better and more could be seriously dangerous.

For point-to-point in VFR conditions, you can easily get by with a reliable Nav/Com and a portable GPS saddled up to the control yoke.

If youre learning instrument flying, fly through the occasional cloud deck, and shoot approaches to high minimums, you can get by with basic IFR gear. At a minimum youll need a Nav/Com that has glideslope and a reliable transponder with Mode C. We tend to differ with some in the training community who insist on ADF and DME equipment. Were better served with GPS.

If you plan to fly lots of IFR, dual Nav/Coms and an IFR GPS is likely on the agenda. But before you start building the new radio stack, you need to address some issues that might lurk off the panel.

First and foremost, youll need to make an effective evaluation of the condition of the airframe before making the plunge into the upgrade. The best place to start is on the outside of the aircraft. Antenna systems play an integral role in the performance of their connected systems, and in the performance of other on-board systems. Particular attention should be directed toward communications antennas that might be corroded, cracked or missing layers of anti-static coating. Without anti-static coating, flight through wet clouds and precipitation will likely inject background static in the Com radios. The base of the antenna where it meets the skin of the aircraft should be inspected for corrosion, too.

Aside from other essential equipment requirements for IFR flight spelled out in FAR 91.205, the health of the transponder and altitude-encoding equipment should be ensured. The IFR environment is no place to battle faulty transponder gear. Plus, the shop will need to tie into the altitude-encoding system for any IFR GPS, because the navigator relies on pressure-altitude input.

It also makes little sense to connect new equipment to old audio switch panels that can shortchange the interface. Many older switching panels lack a speaker amplifier, so its possible that youll be without a cabin speaker if you retain some of these older systems. Who needs a cabin speaker? You will, if your headphone circuitry fails.

For aircraft that havent visited the avionics shop for upgrades in a while, simple upgrades often snowball into major projects. Poor-quality and unruly wiring is just the beginning. The jump to IFR GPS often means ridding old ADF and Loran-C systems from the panel, and their intrusive antennas that exist on the airframe. Patching the airframe of the holes left behind once the antennas are removed isnt trivial. Experienced and conscientious airframe technicians treat this like artwork, often matching the paint on the filler plates with the existing paint on the airplane. Youll pay for such care, and, in most cases, its worth it.

Want to add an avionics master? Aside from installing the switch and replacing old circuit breakers and fuses with pull-type breakers, the tech may need to rework the electrical bus to isolate items. Expect to spend $500 on average for such work; more if you go with new breakers. Add the wise – and often necessary – investment of an avionics cooling fan for another $500.

Youll also need the two-year pitot/static, altimeter and transponder certification as spelled out in FAR 91.411 and 91.413. Most shops flat-rate these checks for around $400, not including repair and troubleshooting if necessary.

What about older GPS?

Despite the presence of the hugely marketed Garmin GNS 530W and GNS 430W integrated navigators, Garmins monochrome GNC 300XL GPS/Com (and the Com-less GPS155XL) still exist in the product line. These GPS units dont have WAAS receivers and likely never will, but for the occasional GPS approach and en-route GPS navigation, theyll do just fine. Theyll serve nicely in the VFR environment, too.

The money snag with IFR GPS is the required accessories for remote CDI and mode-annunciation for legal IFR certification. The Garmin GI102A is an $1895 CDI that mates with the GNC 300XL and GPS 155XL. Mid Continents MD40-series CDI lists for $2500. These indicators display GPS course data and are integral to IFR GPS operations. Because a complete IFR GPS installation could easily top six grand with new equipment, our advice is to go with used accessories when possible.

While not as easy to program in the heat of battle as the latest panel-mount GPS units, we think earlier-gen systems are manageable with practice and study. Searching the used market for GPS systems requires a good eye. Youll need to ensure the unit comes with the appropriate antenna and installation kits. Youll also need to purchase a navigational database subscription through Jeppesen, through the Wingman Services division of Honeywell for Bendix-King GPS.

IFR GPS isnt imperative, although we believe that without one youll be at a disadvantage in both the training environment and in real-world operations. One option is to install an IFR model as a standalone; that is, for VFR without the accessories for the IFR interface. As budget allows, you can complete the interface later. Just dont get stuck with a VFR-only box…be sure its an IFR model.

The Garmin GPS 150 series, as well as the GNC 250 GPS/Com, are VFR navigators forever. Similarly, the Bendix/King KLN89 is VFR only. (The KLN89B and KLN94 are IFR-capable). Stay away from the KLN90 and KLN90A series, because receivers for these are no longer available. The KLN90B is still fully supported and approach-approved, and can sometimes be found for a song.

What about GPS navigators from the abandoned UPS-AT line? The GPS/Com GX60 is an IFR box, as is the GX65 (without a Com). We wouldnt pull one from the panel if we were trying to save money, but were not sure we would install one, given their out-of-production status. The GX55 is capable of IFR en route and terminal certification only.

No portables are certified for IFR operations, but there are still plenty of ways to use them in an IFR environment. Installing a portable inside the panel using the Air Gizmos flush-mount docking station isnt an approved practice in certificated aircraft. The company is working, were told, to gain certification, but for now youll need FAA approval. Thats a long shot with most FSDOs. If you fly an experimental or light-sport aircraft, we see the Gizmos panel dock as a near-perfect interface.

For certificated aircraft, chances are your shop can creatively mount your portable on the surface of the panel while retaining a portable status. They can even hardwire the unit to the aircrafts power.

About the only drawback we can see in going with a portable is the inability to interface the unit with an autopilot. In some cases, its electrically possible, but the FAA has made it clear that it is not airworthy.

If Mode S TIS traffic is out of the budget, consider the Garmin GTX 320A transponder. Its a basic, Mode C transponder thats a good alternative to a failing vintage unit. The GTX 327 has a digital front bezel with timers, pressure readout and direct-entry keypad. If the aircraft has a functioning King KT76A, wed opt to keep it.

Because the GPSMAP 396 and 496 have XM Radio capabilities, the common interface is to connect the XM Radio output to the audio systems entertainment input. Most every modern audio panel and intercom has music-input capabilities and owners are recognizing the benefits of on-board entertainment.

As for Nav/Coms, the key is to use what already exists in the panel. The Bendix/King KX155 and later model KX155A are worthy units. . (The KX155A is for 28-volt systems.) An existing Narco MK12D unit is equally viable. If in good working order, existing ARC/Cessna Nav/Coms could be retained for backup, or even as primary systems if they are the later-model RT385 and RT485 series. We wouldnt spend much money in repairing such units, however.

If you arent comfortable flying IFR with one Com radio, Garmins SL40 is a reliable transceiver, as is the ICOM IC-A210.

Serious IFR fliers might find upgrading to dual, WAAS-GPS and a big-screen MFD worth the investment. For basic airplanes that see only light IFR, an earlier-generation IFR GPS mated to a good portable is enough and presents only a few limitations.

On the other hand, an integrated system such as Garmins GNS 430W or a pre-owned, legacy GNS 430 is worth looking at. The cost Delta might be reasonable enough to spend the extra cash for a setup thats easier to use, is more integrated and allows for future growth.

We think the owner of a Cessna 150 recently had the right idea for his upgrade. Hes learning to fly instruments but realizes that his airplane will never be an all-weather, hard-IFR machine. He purchased an earlier-generation IFR GPS from a buddy who recently upgraded and, after some consultation, purchased a remote CDI and other required accessories from an established shop, who performed the IFR installation.

When the dust settled, he had a basic IFR airplane for a $5000 investment. Thats a number we can live with