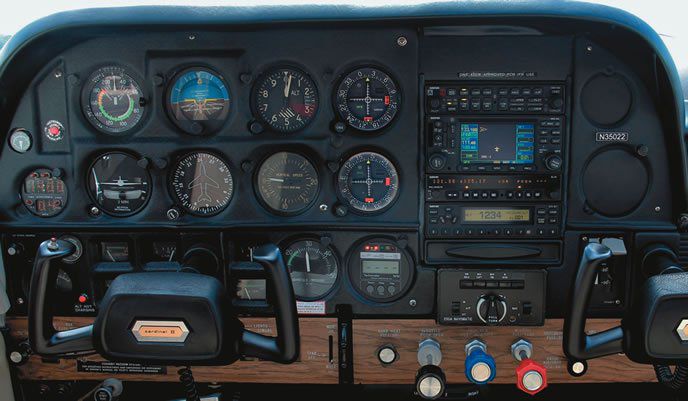 Well cut to the chase. The typical basic ground-up IFR avionics upgrade is going to approach, if not exceed, $20,000. This wont buy an autopilot or primary flight display, so youre stuck with steam gauges unless you can spend around $35,000.

Sadly, weve witnessed enough buyer remorse over the years when owners upgrade entry-level aircraft for IFR on the cheap. Whether its an unsupported IFR GPS found on eBay or passing on a PFD that can save money in the long term, its imperative to price all options before pulling the trigger on the upgrade, including pricing flagship packages.

Moreover, we think many good shops miss the mark when it comes to helping buyers make the right decisions for their mission and budget. In this article, well do what shops should do up front and present the realistic costs and worthy choices for basic IFR capability.

More Than Radios
Youll need to have the aircraft inspected by a trusted and experienced shop before the aircraft hits the installation floor because there is more to the upgrade than primary systems. The budget-busting gotcha with IFR upgrades (and VFR upgrades, too) is the accessories that might be required to support the installed equipment. For starters, this includes antennas, altitude encoders, avionics cooling system, circuit breakers and electrical bus wiring, flight instruments, pitot/static system and instrument panel lighting.

If the aircraft has been operated under VFR, its possible that it hasnt undergone a thorough pitot/static and altimeter system inspection required by FAR 91.411. A static system rebuild and instrument overhaul for even basic vintage Cessna and Piper models could require a sizable teardown and extra costs.

Its not uncommon for an aging and neglected static system to have cracked lines and fittings. Our advice is to have this inspection accomplished first, because it really is the first step in readying the aircraft for IFR flight.

Basic models might not even have a heated pitot tube. Youll need one for IFR flying.

Antenna work can snowball the job, too. Replacing communications antennas often means removing headliners and opening the aircraft floor, plus replacing old coaxial cabling. New comm antenna systems could run as much as $2000, including labor and supplies, and modifications to the navigation antenna system to receive a glideslope signal could require sizable effort.

It could also be a good time to remove abandoned antennas and inoperative ADF and Loran-C systems. The bottom line is to make sure the shop makes an accurate assessment of existing and required accessories and include them in the proposal. The same is true for any systems that needs rewiring. On the other hand, prepare for surprises once the aircraft is disassembled. There are certain issues that the shop cant spot until the job is underway.

The upgrade might be a good opportunity to equip for the ADS-B mandate, and the equipment you choose should be based upon its ADS-B compatibility. Expect to shell out an additional $5000, on average, for an ADS-B-compliant system. Weve included ADS-B systems in the sample IFR packages chart above. Even if you dont install the ADS-B equipment now, ask the shop if there is any spare data wiring that might be added while it builds the harnessing. This might save money later.

As weve preached for years in these pages, the aircraft audio system should be the system to address before any other major equipment is added. Aside from creating more work for the shop that has to piece together audio system wiring that should really be replaced, it makes little sense to connect new equipment to old audio switch panels and wiring that can shortchange the interface.

Many older switching panels lack a speaker amplifier, so its possible that youll be without a cabin speaker if you retain some of these older systems. Think there isnt a need for a speaker? Think about a headphone circuit failure in IMC.

It’s a GPS Mission
Before venturing on an IFR upgrade project, its worth skimming FAR 91.205. It lists the bare-bones equipment required for flying in the clag. But the regulation primarily addresses flight and engine instruments, and not necessarily the avionics youll want for your mission.

For instance, if your plans include instrument training, the occasional climb and descent through friendly cloud decks and shooting approaches to high minimums, you can get by with what we call old-school IFR avionics. At an absolute minimum, that includes a navcomm with glideslope, OBS indicator and a reliable transponder with Mode C altitude reporting, although for actual IMC we think a second comm radio is required equipment.

We asked Garmins Jessica Koss what the company considers modern entry-level IFR equipment. Surprisingly, the answer was not a GTN650/750, but instead, the $4995 GNC255 navcomm and the $2500 GI102A navigational indicator. While we think thats a good choice for minding a lower budget, it could also leave you disadvantaged in the IFR environment. These days, its all about GPS, and for practical IFR ops, youll likely want an approach-approved model. If youre scanning the used market for IFR GPS systems on the cheap, caveat emptor. You could be throwing good money after bad.

The money snag with first- and second-generation systems is the required accessories needed to make the installation IFR legal. This includes a CDI and GPS mode-annunciation. These indicators-that might top $1500-display GPS course data and are integral to IFR GPS operations. Understand that a complete vintage IFR GPS installation could easily top six grand and that wont get you WAAS capability. Plus, older models like the Apollo GX-series and BendixKing KLN89 dont exactly have a user-friendly feature set, in our view. Instead, we favor the Garmin GNS430W. Although its out of production, we have no reason to believe that it wont be supported for the long term. Garmins FlightStream wireless interface recently gave the GNS430W and larger GNS530W a new lease on life, adding a victor airway/flight planning interface through a tablet computer.

Bang for The Buck
Thats an accurate description of the hugely successful GNS430 because it does so much in a single box, making it a good choice for budget IFR upgrades. But given its high resale value, dont expect a huge cost savings over Garmins current-production GTN650 GPS navigator, especially if the GNS430W has to go back to Garmin for repair. Shops told us that the cost delta between a quality used GNS430W and a new GTN650 is around $2000. But that savings can get eaten in repair costs.

Garmin has flat-rate pricing of almost $900 for the GNS430W, which means you want to buy from a reputable source (preferably an established avionics shop) that can test the unit for signs of failure.

This includes display problems, navigation receiver issues and even cosmetic imperfections like faded display lenses and worn bezel nomenclature. Beware of older 28-volt GNS430s-these arent supported by Garmin and will require a voltage converter for use in a 14-volt electrical system. We wouldnt necessarily avoid a non-WAAS GNS430 or GNS530, but understand that these old GPS receivers arent compatible with the requirements of the ADS-B mandate. Some might not have a terrain board.

Our search of the used GNS430W market (sourced through avionics shops, www.barnstormers.com, eBay and Trade-A-Plane) revealed average selling prices in the $7000-$8000 range, not including an indicator.

Another option might be the Garmin-AT GNS480 or older Apollo CNX80. These are WAAS models with decent capability, but we couldnt find many for sale.

We wish sellers would stop bragging that their used avionics come with yellow tags. This is marketing propaganda left over from the days when serviceable equipment was labeled with a yellow serviceable sticker. These days, what a buyer really wants is a signed FAA 8130-3 airworthiness approval form. It shows the disposition of the serial number and part number-specific article (either overhauled or serviceable), which shop manuals were used to determine its final status, the repair station number that did the work and signed it off and other data, which shows the part is airworthy and eligible for installation in an aircraft. This paper chase ends up in the aircraft logbooks and certainly adds to the value of the component.

Mixing Old and New
To save money, this is what youll need to do. This might include retaining an old navcomm for backup. But for radios that arent supported, including all Narco models and some ARC/Cessna models, think long term and about their inevitable failure. Consider that the panel is torn open now, making a full stack replacement easier and more cost effective than doing it later.

Prepare to get backed into the corner when you consider installing an entry-level PFD, like the Aspen Evolution. Given the amount of wiring interface that occurs between the Aspen and a GPS navigator (and even an analog navcomm), its best to install both at the same time. The most common phrase around most avionics shops is the time to do it is now, and for good reason. But Aspens single-screen Evolution 1000 PFD can be a $13,000-plus buy-in, including installation. For light IFR missions and lesser valued airframes, that could be a questionable investment with little return.

The same goes for traditional HSI systems, including the King KCS55A, Sandel SN3308 EHSI and the more basic Century NSD360A. Unless the prices of the HSI is less than half the cost, the more modern Aspen PFD system is a better investment. Moreover, the money spent on a PFD may be better spent on a basic autopilot.

On a side note, fewer avionics can help tame the learning curve. While not an IFR trainer, that is the approach Sportys is taking with its Cessna 172LITE project. Sportys is acquiring used 172 aircraft, modernizing the interiors and equipping them with the most basic avionics and flight instrumentation.

Sportys Charlie Masters told us it chose the 172 because its panel is extremely scalable, the airframe is certified for IFR and is on the approved model list (AML) for many aftermarket avionics. That is worth considering when selecting an airframe for IFR upgrade.

Final Thoughts
Our advice is to resist over-equipping and upgrade for IFR based on your mission and the aircraft value. For the most basic and occasional IFR mission, consider traditional navcomms like the Garmin GNC255 and even a used BendixKing KX155 with glideslope, supplemented with a tablet or portable GPS. For under 10 grand, its the cheapest IFR upgrade.

For more advanced missions, we favor a used GNS430W and a backup navcomm like the KX155, SL30 or a new GNC255. But its worth pricing the current GTN650 and even a larger screen GNS530W. For heavy IFR, we think sacrificing a PFD for an autopilot is the right decision.

Last, if youre starting from scratch and worried about taking a hit when you sell the plane, the best option might be to just sell it now and buy one thats already equipped for IFR.