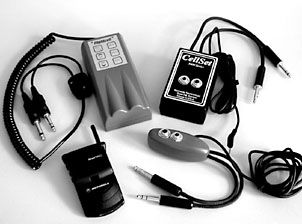 If youve ever used a cellphone in the cockpit of a GA aircraft, you know its almost impossible to hear when the engine is running. Many winters weve sat in the cockpit in frigid conditions without heat while filing a flight plan, thinking there must be a better way to use a cellphone.

There is. Last year, we discovered one of the devices that allows you to access a cellphone through your headset. Using a cellphone in the airplane is now simpler with this cellphone-to-headset device.

Over the last year, weve seen two other companies introduce cellphone-to-headset devices and a few months ago, we ordered one of each of these devices to put them to the test. Before we started using a cellphone in the airplane, we worried about system overload. Not the cellphone system, but our system. When speaking on a cellphone in the car, our attention is diverted-its a fact. Would the same problem happen in the cockpit? For example, sitting on the ramp making a call, would we be able to monitor the ground frequency? Would we be able to jot things down and watch for other aircraft taxiing? With all of these devices, the answer is yes.

These gadgets operate similarly, in that each allows you to talk on the cellphone through your headset-without keying the mike, since youre not using the radio. But when you use the phone, you can still hear and use the radio at the same time. This is a plus and the reason these devices are so useful.

Still, we wouldnt recommend simultaneous taxiing, monitoring ground and talking on the cellphone. You may have better concentration than us, but you wouldnt want to miss a call from the tower while chatting with a business colleague on your phone.

The Right Cellphone
Before you can start making calls in your cockpit, you have to have the correct cellphone. As long as you purchased your cellphone in the last year or two, you should be fine. Youll need a cellphone with a speaker out port, like the one used for hands-free operation in an automobile. If you dont have this port, youll need to get a new phone or youll need an adapter.

If you need a new cellphone, you should also consider a cellphone that rings through the speaker port. With this feature, your cellphone will ring in your headset, if you desire. For reasons discussed below, for inflight use, you should consider subscribing to a digital PCS service.

All of the cellphone-to-headset devices are configured to work the same way. You plug your headset into the device and you plug the device into the headset ports in your aircraft intercom system. By having this intermediate device between the aircraft intercom and your headset, you retain the capability to introduce other sources of audio input/output, in this case, cellphone transmissions.

Each device thus has an extra cable that terminates with a plug, which you then connect to your cellphone. Its interesting to note that this plug may also be inserted into other sources of audio, such as music sources, tape recorders or virtually any other audio source.

Otherwise, you use your cellphone normally with these cellphone-to-headset adapters. You dial normally, it rings and you speak normally. Its not rocket science.

In addition to the right cellphone, some of the cellphone-to-headset device manufacturers specify that certain intercoms or headsets work best, but they dont make any recommendations.

For our testing, we used a PS Engineering 6000MS intercom and three types of headsets-an ANR Telex, a passive David Clark, and a passive Peltor. Now, once you have all of the correct cellphone and headset equipment, you may proceed to the next step-choosing a cellphone-to-headset device.

FlightCell
The most full-featured of these devices is the FlightCell. And at $295, its also the most expensive. Made in New Zealand, the FlightCell is packaged in a large, impressive box filled with goodies. The unit works off a rechargeable battery, which, of course, must be charged before use.

It can also work on ships power through a cigarette lighter adapter. The package contains connections for both. Instructions are also included and necessary, as use of the command keypad is not intuitive.

The advantage of all of these capabilities is that you can use the FlightCell for many purposes. On the downside, if you simply want a cellphone-to-headset device, the FlightCell seems like overkill, especially with all of the removable and losable parts.

Because FlightCell is made in New Zealand, its difficult to get. After we ordered our unit, we had to wait about six weeks for delivery. When we first identified the unit for this comparison, we used the contact information on the company website.

We spoke with the company in New Zealand and after explaining that we were calling from the U. S., we learned that we could order the product from a U.S. distributor.

We contacted the distributor in Denver and were placed on a waiting list for the next shipment of product from New Zealand. Weeks later, we received our unit. Given this products dependence on international manufacture and support, we question the availability of quick service.

CellSet
In price, the next most expensive cellphone device is the CellSet, which sells for $189.95. When our CellSet arrived, our first impression was somewhat underwhelming. Just a black box and a receipt. During use in our airplane, moreover, we immediately found the CellSet difficult to arrange in the cockpit.

The wiring from the black box to the aircraft intercom is short and simply hangs freely. We also found that the moderately large box was uncomfortably obtrusive, especially during landings. Unlike smaller devices like the SafetyCell, we couldnt simply tuck the boxy CellSet away.

Despite these misgivings, the CellSet performed flawlessly, as described below. Frankly, we were surprised, as we hardly ever see the CellSet advertised. Still, our experiences with the CellSet folks were positive. They were friendly and fast. We received our unit only two days after placing an order. We thus expect that service will be a snap. We also spoke with several CellSet owners and none had any complaints.

SafetyCell
Perhaps the most well known-and least expensive-cellphone device is the SafetyCell. Theres a standard unit for $99 and an amplified unit for $159, plus a helicopter unit for $159.

The SafetyCell is simple-theres only one part. Also, in contrast to the FlightCell and CellSet, the SafetyCell uses no battery. It gets power from the intercom, which is both good and bad. Its good because you dont have to worry about another battery and bad because youre inop in an electrical failure. SafetyCell is working on a new product that will ingeniously correct this shortcoming without a battery.

We reviewed both the standard and the amplified units and we liked the design. The SafetyCell products are small and can be easily tucked into aircraft sidewall pockets. Indeed, you can connect your headset into SafetyCell, connect the wiring to your headset ports on your intercom and tuck the whole wiry mess away and out of sight.

The only thing youll need is access to the cellphone plug, which comes with a conveniently long cord. We spoke with many SafetyCell owners, and most were satisfied. One former owner was unhappy and, when he returned the unit, was charged a restocking fee. However, we found the SafetyCell staff cooperative and friendly. Post-sale service shouldnt be a problem.

How They Compared
Our testing of these products on the ground identified a clear winner. In fact, the winner was so clear that we worried that our test bench was flawed. For that reason, we contacted some of the manufacturers and asked for input. We were told that some headsets work better and some worse. So, we went back, obtained more headsets and conducted our tests again. Our results were the same.

In our aircraft, the winner was the CellSet. We had absolutely no complaints with the quality of the reception. It was as clear as using a cellphone in a quiet room, even with engine running on the ground (about 85 dB) or in flight (about 108 dB simulated). Frankly, we were amazed. We didnt expect such great results from the boxy unit. We had less luck with the FlightCell. Initially, we had trouble using the device, due to the initial battery recharging requirements and the non-intuitive keypad instructions. Once we solved those problems, we found the reception acceptable, but if we moved the cellphone close to the unit during use, we encountered annoying feedback.

The volume control on the unit is a nice feature not available on the other units but for $295, we didnt find the substantial quality difference that we expected.

Our main problem with both of the SafetyCell devices was loudness of the cellphone; theres also a general lack of clarity of reception, in our estimation. With our equipment, we were simply unable to hear the other party on the cellphone without effort.

Even with the speaker volume on our cellphone set to max, it was hard to hear clearly. The amplified unit was better than the standard unit, but it was far from perfect. Plus, the amplified unit also amplifies the callers voice to the cellphone listener and our test subject wasnt happy with the shouting at the other end.

Despite the inconsistencies of service, we still believe that at least two of these devices are excellent safety back-ups in the event of total electrical failure during flight. If this ever happens to us in IFR conditions, we plan to call ATC on the cellphone-which will be connected to our CellSet-at least until we install AirCell.

Our recommendation in this type of product then is the CellSet. Its reasonably priced, easy to use and generally outperforms the other two entries.

Lionel Lavenue is a patent attorney and Cessna 206 owner in Washington, D.C. Hes a frequent contributor to Aviation Consumer.