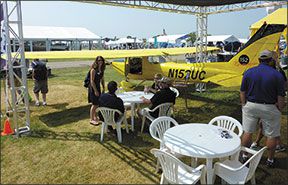 A month after Cessna announced its $420,000 diesel Skyhawk, our test-the-waters opinion sampling drew two reactions from flight schools: impolite guffaws or stony silence. Logically, that ought to make emerging refurb projects like Redbird’s Redhawk and AOPA’s new remanufactured Cessna 150s/152s a shoe-in cinch for a market starved for affordable trainers. Well, not exactly. Both the AOPA and Redhawk projects are aimed at taming the escalating cost of the world’s most popular trainers, but the overwhelming majority of schools we interviewed about both of these airplanes say they’re still too expensive, albeit a dramatic improvement over the price of new Skyhawks, which are increasingly out of reach.

At AirVenture 2014, AOPA unveiled what it’s calling the 152 Reimagined and a year ago at the same venue, Redbird showed off the Redhawk, a spinner-to-tail redo of 35-year-old 172s sexed up with Continental diesel engines and glass panels from Garmin.

Both attracted attention and although there appears to be buyer interest, they may be a hard sell to flight schools. To be fair, AOPA’s target market tilts toward flying clubs, which the association hopes to become active in promoting and organizing, but schools are on the radar.

Yellow Birds
The refurbed 150s and 152s will form the nucleus of that effort, according to AOPA president Mark Baker. In an interview at AirVenture, he told us that the association isn’t planning to get into the aircraft sales business, but undertook the 150/152 refurb project as a proof of concept.

“Most people would say it’s a great flying airplane. There are thousands of these units out there. The conversation is really…you can find a way to fly,” Baker said. “The proof of concept is really are there people interested in adding a plane to their flying club? We can get the financing in place and the insurance that can support this kind of purchase. We’re not in the aircraft business. That’s not what we do. We want to take the narrative to the public,” he added.

The association bought three aircraft on the used market and turned them over to Aviat Aircraft in Afton, Wyoming. Aviat builds the Husky and the Pitts lines and has extensive experience in repairing and refurbing.

Each aircraft was disassembled, stripped to bare metal, primed and repainted. All of the original wiring was replaced with new and any airframe damage, corrosion or wear was repaired. The interiors would be recognizable to any pilot who learned to fly in the 1970s, but all the components are new, including seat upholstery, headliners and instruments. In the aircraft we examined, the old Royalite upper panel was replaced with a painted metal panel, although the airplane retained its plastic lower panel and door panels, albeit with new material.

Avionics are adequate but minimal. A single Garmin GTR 225 does navcomm duties, paired with a GTX327 transponder and a PS Engineering PM 3000 intercom. A Garmin aera 560 portable in an in-panel mount lives above the navcomm. For now, the aircraft do not have ADS-B Out. Beyond these upgrades, the rest of the panel is original equipment, albeit new. For the 152, the engine is an overhauled Lycoming O-235.

“I can’t argue that you can go buy a good 172 today for a lot less than this costs,” Baker told us at AirVenture.

“But it’s probably not having new wiring, new Plexiglas and hasn’t been gone through from an end-to-end perspective. So I recognize that some people will say they can buy a good 152 for less and we encourage that. But if you want something that’s pretty new and will run to TBO plus, this is the best way we can see of doing this,” Baker said.

Costing It Out
We interviewed more than a dozen U.S. flight schools to sample opinions on both the AOPA project and Redbird’s Redhawk. We also asked the schools what numbers are reasonable to apply for calculating operating costs.

At AirVenture, AOPA offered hourly operating costs that are summarized at right. These total $63.88 per hour, which the flight schools we contacted said were reasonable. However, we think they’re slightly low, at least in the flying club context. The calculations were based on 700 hours a year and an eight-member club. In our view, that would be a very busy club indeed. We think a more practical number is 400 to 500 hours. In addition, an engine reserve of $5 is too low even if a 2400-hour run on an O-235 is factored in. Bluebook’s engine overhaul cost is about $21,000, so we think at least an $8 reserve is closer to reality. That brings the adjusted hourly to about $70 an hour—still quite reasonable, in our opinion.

In the flight school context, where margins of 30 percent are routinely added to net costs, that would yield a customer rental price of about $91 an hour. Our survey revealed that’s actually on the low end of what schools are typically charging for 152s. But would any schools be willing to put a fully refurbed Cessna 152 on the rental line? “No. That’s a ton of money