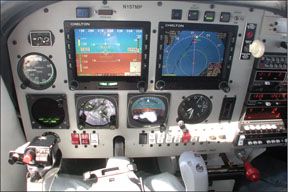 If youre a fan of The Military Channel, you will have seen video shot through the head-up display in a modern fighter, say an F-16 or an F-18. Paste a blue-and-brown background on that and move it off the canopy and into the center of the panel and thats a good approximation of what its like to fly the Chelton FlightLogic EFIS. And thats to say its entirely different from the Garmin G1000 and Avidynes Entegra.

Owner Lloyd Zand, whose Miami-based Mooney PFM conversion we flew for this report, is right when he describes the FlightLogic as more dynamic than either of the other two systems, which concentrate computing power on mimicking the look of the steam gauges youre used to. The FlightLogic uses a different paradigm that, in our view, encourages a more complete and three-dimensional sense of position awareness.

It does this through clever use of symbology that any military pilot would recognize and it operates on the notion that burning up display real estate to show the airplanes attitude is less important than showing where the airplane is and where it will be a few seconds from now. Further, the FlightLogic gives the pilot a direct visual representation of position rather than relying on an electronic abstraction of steam gauges, as the Garmin and Avidyne do.

Symbols
Like all EFIS systems, the FlightLogic has a primary flight display on the left and a multi-function display for map data on the right, although, as mentioned, the displays are small enough to allow vertical pairing in larger aircraft. Lets examine the PFD first, which is the most innovative aspect of the Chelton design. Rather than an electronic version of a traditional attitude indicator, the FlightLogic relies on a handful of symbols projected against the three-dimensional backdrop of the terrain/sky representation.

The two primary symbols are the flight path marker-a bulls-eye circle with three radial lines-and the waterline, a small elongated W. Both of these move fluidly with aircraft movement, with the flight path marker indicating where the aircraft is going and the waterline showing which direction its pointed. On the imaginary calm day in level flight, the two may almost align; when they arent, the airplane is either slipping or crabbed into the wind or pitched off the waterline.

There is a horizon line on the PFD, but its easy to miss. In flat terrain, it appears as a thin white line along the virtual depicted terrain, while in hilly terrain it cuts through the terrain. In level flight, anything above the line is above the real horizon, anything under is below the horizon.

For pitch, the FlightLogic projects a 10-degree up/down scale in the center of the display and another symbol called the pitch limit indicator-a half-round shape with two radial arms or wings-is best thought of as visual energy indicator. It moves down toward the flight path indicator as the airplane approaches stall speed, turning amber at 20 knots above the clean stall speed and red at 5 knots over stall. Since the FlightLogic senses flight loading, the stall speeds are G-corrected.

One difficulty pilots have in transitioning to glass is airspeed and altitude indications with tape displays, rather than analog hands. The FlightLogic has the usual airspeed tape on the left and altimeter tape on the right, but also a tape heading along the top edge of the screen. This is a throwback to the age of the ancient magnetic compass, in our view, and not the FlightLogics strongest feature. However, theres a solution. Actually multiple solutions: An HSI can be optionally overlaid on the flightpath marker, which makes the view a little cluttery or, alternatively, the MFD can be configured with an HSI page, thus in a vertical pairing, you can set-up the best of all worlds.

Further, with the skyway engaged, absolute heading values are less critical than with traditional steam gauges. Last, the heading tape is equipped with a small magenta diamond, waypoint or pointer symbol to indicate which direction to turn to fly toward selected courses.

You can toggle the skyway on or off, but we liked it on. The selected course-either enroute or an approach-is depicted accurately in space by the parade of skyway boxes emerging like marching toy soldiers from the next waypoint, which could be an airport, an intersection or a final approach fix.

Using the skyway boxes is like looking out the window and being able to actually see the course in space. By merely positioning the flight path marker toward the boxes and rolling into the appropriate bank angle, the actual heading is unimportant. One indication of the depth of thinking that went into the FlightLogic is the subtle cue the skyway boxes give with regard to required bank angle. Since the system knows speed, wind and loading and knows how fast its closing on the selected course centerline, for turns requiring more than 5 degrees of bank to intercept, the boxes automatically tilt at the appropriate bank angle so you find yourself always closing on the course at exactly the correct rate and bank. We find it natural and easy to do, with no mental math required.

The active waypoint on the PFD appears as a magenta circle with a drop-down leader toward the terrain. If the active waypoint is 600 miles away, its a pink dot on the horizon. If its a nearer waypoint on the road to a distant destination, it appears with a longer leader, giving it a float-in-space three-dimensional look thats enhanced by the skyway boxes. The PFD can show a mini-map in the lower right corner, for large-scale position awareness relative to the next waypoint. If all of this sounds cluttery, it can be at times. But seven elements-bank indicator, mini-map, skyway, terrain, traffic, HSI and a two-cue flight director-can be switched on or off individually.

MFD
The FlightLogics MFD is similar to the moving map found in other systems and it contains the usual suspects, such as active and future courses, terrain, airspace, basic nav details and air data calculations, including wind, OAT and TAS. We found two features on the MFD especially intriguing. One is called the dead-stick glide area, the other projected path. Its also reversionary with the PFD, so the MFD doubles as a back-up. The glide area appears as a constantly shifting circle around the centered airplane symbol. It depicts the power-off glide range under the current conditions, including wind and altitude; the higher you are, the larger it is. It tends to be pear-shaped on the downwind side of the course, for obvious reasons. We think its a terrific adjunct to safety.

The projected path indicator is, in our view, one of the neatest things in all of EFIS-dom. It appears as a squiggly white noodle emerging from the front of the airplane if its nudged off current steady-state flight. In a turn, it curves out in the direction of bank, so to intercept a magenta or white course, you merely turn toward the course line, then adjust the bank angle until the projected path intercepts it. It automatically accounts for wind and you can play changes with the slightest adjustment in bank angle.

Operating Logic
We asked three owners how theyd rate the difficulty of learning the FlightLogic system on a scale of one to 10, with 10 being the most difficult. All three rated it between three and four, an assessment we share. Operability of the FlightLogic system will vary by the type of installation-it will be different for the pilot of a Garmin GNS 430/530-equipped airplane than it will be for the owner of a dual KX-155 set-up.

Because it has fewer controls than the G1000, the FlightLogic depends heavily on menus and softkeys. We found these to be logical and not difficult to grasp quickly. For example, pushing the heading button pulls up the heading bug, which is adjusted with the right knob on the PFD-a single knob, they arent concentric. Pushing the menu button pulls up five choices, each with a soft key: bugs, zoom control, declutter, waypoint selection and a timer.

Pushing the appropriate soft key then enables that function, with text input done via knob scrolling. Each layer of menu has a clearly labeled exit key, so its easy to back out of task. Confirming and setting a value-say, altitude pre-select-is done by the somewhat unconventional method of pushing the knob in.

Owner Richard Leofsky told us this was his most significant complaint about the FlightLogics operating logic. “If you forget to push that knob,” he said, “you can start the downward spiral of confusion in a high workload situation.”

Field Morey, who installed the FlightLogic system in his Cessna 182 TurboRG, has used both Garmin and Chelton equipment extensively. Which is easier to use? Neither, he says, theyre just different. He believes Garmin equipment is easier to set-up for approaches but the Chelton is, nonetheless, learnable.

One thing Morey doesnt like, he told us, is the way the Chelton sets up full instrument procedures with procedure turns. Garmin logic allows modifying the waypoint entries for an approach while the Chelton does not. Because Morey flies frequently in non-radar areas, he misses this flexibility. “This is a big deal to me,” Morey told us.

Overall, we give Chelton high marks for designing relatively transparent logic. We think any pilot would feel comfortable with the system in four or five hours and could master it in perhaps double that. Given its operating transparency and paucity of buttons and knobs, remaining current on it would be easier than it would on the Garmin G1000, in our view.