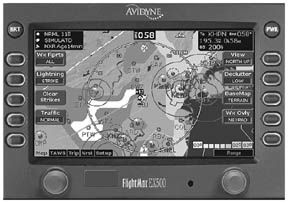 When we last examined weather datalink gadgets-all of two months ago, mind you-it appeared that the market was sorting itself out and that the dust had cleared sufficiently to make an intelligent buying decision. The EAA AirVenture show at Oshkosh blew that theory to bits.

The chart on these pages offers updated information on the article that appeared in the August, 2004 issue of Aviation Consumer.

Bottom line up top: there are more datalink products than ever, prices on the data itself are declining-or at least softening-and yet more products are still in the works, including an XM-Radio-based receiver that will display weather on the GNS430/540 series navigators.

Although the big news is WSIs surprise interface with the Garmin navigators, we saw a veritable explosion of weatherlink choices from Control Vision and NavAir/Airgator, both companies that specialize in weather and navigation products for PDAs and small computers. Worth nothing is that this updated chart doesnt list all of the options available from either company. In fact, weve only listed a mere fraction of the possibilities and packages. If weather datalink via PDAs interests you, check for additional detail on each companys Web site. The URLs are given at the end of the article.

Avidyne
A correction: in our OSH report, we gave the price for Avidynes new XM-based receiver incorrectly. The price of the XM receiver is $3750 but until September 30th, Avidyne was offering a $1575 discount for a total cost of $2175. We incorrectly reported that the upgrade cost was $1575. The discount applies only to current owners of the EX500 MFD, which already has a built-in datalink receiver using the Orbcomm low-earth-orbit (LEO) satellite system.

Users have complained that the EX500s datalink performance is slow and unreliable. Although Avidyne says it has improved the system, the new XM-based broadcast datalink receiver should address these complaints.

One selling point of the Avidyne architecture is redundancy: users will have the choice of having both LEO and geosync satellite choices so one can theoretically back-up the other. The XM-based data is all you can eat based on fixed monthly charges while the Orbcomm data is priced on a per-use basis.

The lesser plan-which is called Aviator Lite-doesnt include winds aloft, echo tops, severe weather storm tracks, AIRMETs, SIGMETs, surface analysis and lightning data. Frankly, although that stuff is nice to have, NEXRAD imagery is the critical data and its included in the cheaper plan, along with METARs, TAFs and other basic weather.

WSI, Garmin
As we reported, WSI surprised Garmin by introducing a receiver that will interface with the GNS430/530 to provide rapid, geosync-based weather data. WSI pledges to support the product even as Garmin upgrades the GNS530 to WAAS capability.

Although Garmin is playing catch-up, it did announce a new XM Radio data receiver for the Garmin AT MX-20 MFD. That product-using the WxWorx dataplan-will compete directly with WSIs offering for the MX-20, which has generated rave reviews. One version of the receiver will also have the capability of receiving XMs audio entertainment channels. Whats really needed, of course, is an XM option from Garmin for the 430/530. Its expected sometime next year but no promises have been given on dates.