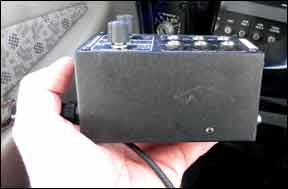 The way we see it, any cockpit with more than one seat has to have an intercom. Yet some stark LSAs, ultralights, gliders and pre-electric-system classics go without. Given our ho-hum experience with portable intercoms in the past, the performance of DRE’s new 205e stereo portable was a welcome surprise.

Panel-Mount Wannabe
The stereo 205e started life as the DRE 201. DRE built on that model such that the new 205e is perhaps the most well-equipped portable on the market. In fact, its feature list rivals integrated audio panels.

The 205e is a two-place model (reinforcing LSA applications) with dedicated volume and squelch, plus pilot isolation. The two simple knobs for volume and squelch feel sturdy, and the anodized aluminum chassis is rugged without being too heavy.

Finding a place to stash the boxy unit (4.5 in x 2.5 in x 2.5 in) can be a hassle. We tried the map pocket, on the floor and in between the front seats and none worked exceptionally well. Then there’s the chore of plugging the unit into the aircraft’s audio jacks and hiding the cables. DRE offers an optional rail mount for LSA and ultralight panels, which is clearly the way to go. The unit comes with high-quality, Mil-spec audio cabling, and the unit either runs on two 9v batteries or with a supplied DC adapter. It has a low-battery annunciator, which is a must for minding the 9v batteries.

DRE claims that weakened batteries won’t affect the unit’s performance, which isn’t the case with other portables we’ve used. We found battery endurance reasonably good, even when purposely starting with half-used Duracells.

The 205e excels in remote audio inputs. There’s a telephone input, music input and recorder output jack, all neatly laid out above the headset jacks on the case. There are also three aux inputs on the side of the unit for engine monitoring alerts, traffic minder alerting, stall warnings or other attention-getters.

We tested the 205e in a Cherokee wearing our Bose ANR headsets switched to stereo mode and were instantly impressed with the audio quality. Microphone audio was on the raspy side, in our opinion. The side tone seemed to overmodulate, and we looked for a modulation gain adjustment that wasn’t there.

There is an accurate squelch adjustment. Other portables we’ve tested have poor squelch controls that tend to clip. Not the 205e. The volume pot worked well, too, offering enough gain in the Cherokee’s cabin where a one-quarter-volume setting made for comfy listening behind the Bose ANR circuitry.

But what impressed us the most about the 205e was the music quality. We plugged in our Sony MP3 using the supplied stereo patch cable and enjoyed deep, clear tunes for the flight. In fact, the music quality was better than many panel-mount models we’ve used. There’s even a music mute control where you can sing along or have the tunes mute with an open squelch.

There are also smartly designed features that include a stuck-microphone annunciator that’s both audible and visual plus a failsafe mode that still allows comm radio functionality if the batteries quit.

Conclusion
DRE stands behind the 205e with a three-year warranty and offers a 30-day money-back guarantee. That’s impressive for a portable unit with a list price of $399. (Online prices can be just over $300.) The Pahrump, Nevada, company also sells headsets and we’ve heard good things about their customer support.
Based on all the time we spent plugged into the 205e, we proclaim it a solid bargain with high-end performance that impresses.