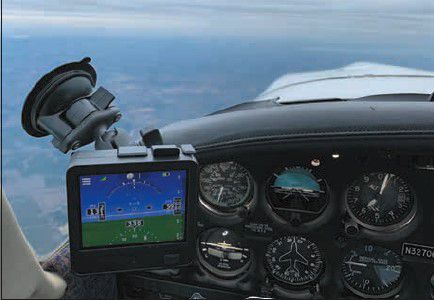 If you gathered 100 pilots in a room and asked for a show of hands who likes their aircraft’s vacuum system, you probably wouldn’t see any. Yet the lowly and disrespected vacuum pump soldiers on for plenty of instrument panels not converted to all electric.

For portable backup, Dynon’s Pocket Panel portable EFIS series has historically been a decent seller, but the much improved current-gen model D3 EFIS has plenty of competition from app-based backups and AHRS-equipped portable ADS-B. I’ve been flying with the latest Pocket Panel in my Piper Cherokee Six and prepared this field report. 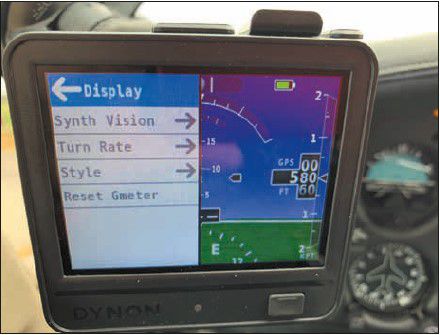 The idea behind Dynon’s latest D3 is the same as the earlier D1 and D2 models: packaging backup attitude data into a completely portable, battery-powered, GPS-equipped instrument. Of course with no required connection to the aircraft, and with a couple of mounting options, the D3 can easily be moved between aircraft (provided you’ve charged it) and serve as backup for electrical and vacuum system failures. Since the D3 is a portable device with no certification, it can’t legally be used as a standalone primary instrument in certified aircraft.

The D3 essentially uses the same AHRS as Dynon’s panel-mount avionics, but it’s mated to a different display and supplemented by GPS data instead of being connected to the aircraft pitot/static system.

On the D3, Dynon says it dispensed of the bezel controls in favor of touchscreen because it recognizes that pilots live in a touchscreen-driven world. It also added synthetic vision-something most every buyer might expect in any EFIS display.

Moreover, the current D3 portable further improves on previous Dynon Pocket Panel models by providing a brighter display (twice as bright as the D2), an integrated G meter and the terrain-only synthetic vision feature at a slightly lower price point than its predecessors. At press time, the D3 is street priced around $879.

At 3.5 by 3.25 by 1.0 inches, the D3 is a relatively small chassis, which makes it work well for hanging from a RAM suction mount. But the D3 isn’t waterproof, so use caution in seaplane applications.

Getting rid of function keys means there is more room for the color touchscreen, and the unit has just a single small button for power. Touch the menu icon on the upper left corner of the screen to access most controls and settings, which Dynon kept shallow to provide a straightforward feature set. Swipe left and right on the main display to choose between various displays.

There is a jack for connecting an included external GPS antenna, and also a charging port on the left side of the case. The device uses newer USB-C input for charging the Li-ion battery, and the D3 includes a USB-C charging cable that plugs into the included 12-volt lighter adapter or the included wall charger. There are also two mounting options: a RAM suction cup, and a “pinch mount” intended for mounting in an empty 3 1/8-inch panel cutout. There’s a printed quick-start card, but you must download the clearly written and easily understood user manual from Dynon’s website. Dynon recommends that you check for software updates when you first get the unit. That’s important because our demo had the original version 1.0 firmware, not the February 2019 revision, but it was easy to download it to a USB stick and plug it in to the unit using the included USB-C adapter.

The D3 displays what you’d expect to see on a modern EFIS: aircraft attitude provided by the AHRS (pitch, roll, turn rate and slip/skid), plus GPS-derived groundspeed, altitude, vertical speed and ground track. Attitude integrity depends on having a GPS fix, so there’s also a GPS signal strength indicator, and you’ll see the familiar red X symbology if the GPS signal degrades enough.

The standard I use when looking at a new gadgets is whether I can figure out the basics without having to read the manual. That normally doesn’t apply to the latest aviation gadgets, but in this case the D3 passes this with flying colors. It begins with the power button on the front of the bezel. When you press it, the D3 powers up and displays a short summary page, which you dismiss by touching the screen. After a few seconds the EFIS display appears and you’re ready to fly (although you should align the unit before takeoff). The display has a small icon in the upper left corner (three parallel lines, nicknamed the “hamburger menu”). Touch that and you’ll have access to a small settings interface that lets you align the unit, adjust screen brightness and change between unit systems (knots/MPH/KMH).

The alignment procedure is straightforward: The normal EFIS display appears with a set of arrows that let you adjust roll and pitch indications to match the true pitch. The Piper PA-32 sits nose high on the ground, so I had to align the unit to zero the pitch indication. Alignment settings are preserved when the unit’s powered off.

In flight, the unit simply works. You can swipe between the EFIS and G meter pages, and you can use the hamburger menu to adjust display brightness, although I found that the display “auto” mode works well. Speaking of the display, the color LCD touchscreen is clear, bright and easy to read, although I didn’t find the fonts and graphics to be as crisp as the Garmin G5, the Aspen Evolution or even current-generation panel-mount navigators.

The screen is a bit shinier than I would like, but Dynon includes a matte-finish screen protector in the box that you should plan on applying to both reduce glare and protect the screen against scratches.

I evaluated the D3 on both local and cross-country flight in various conditions, including day and night VFR and IFR. In all cases, it worked flawlessly. The GPS-derived speed and altitude agreed within a few percent with my panel-mounted Avidyne IFD540 GPS navigator, even without an external antenna, plus the pitch and roll attitude indications were solid and stable. This is in sharp contrast to my tests a few months ago with a Stratux-based ADS-B unit feeding data to an EFB app on my iPad, which was so jittery as to be unusable. If you’ve flown with other EFIS instruments, you can adapt to the D3’s display pretty much instantly. If you’re used to traditional round gauges, you should plan on practicing with the D3 to get used to the differences it will impose on your scan. It will probably feel unnatural to focus on the single instrument at first, and that’s not a good match for using the D3 in a backup situation. Dynon takes pains to say that the GPS-derived track, airspeed and vertical speed are advisory only and not meant to replace your magnetic compass and pitot/static instruments, so it’s a good idea to get used to including all of them in your modified scan.

The mounting location of the Pocket Panel matters more than you might suspect at first. The unit has an alignment procedure to adjust pitch and roll, meaning that you don’t have to have perfect alignment in those axes. Dynon’s documentation says the unit can be adjusted +/- 6 degrees for roll and +/- 30 degrees for pitch.

Yaw alignment, however is more important: The unit must be aligned so that the display is parallel with the wingtip-to-wingtip line. Using the pinch mount to put the unit flat on the panel is ideal for this, assuming you have an empty hole in the panel. If not, wherever you mount the unit must be a location that keeps the display in that position. If you angle the unit to face your seating position, you’ll see that the attitude, turn rate and skid ball data all degrade and will read incorrectly. On my first flight, I was surprised by this since I hadn’t carefully read the operation manual and didn’t know to expect that degradation.

My Cherokee Six didn’t have any open slots in the panel, so I used the RAM suction cup mount to secure it to the left side of the windscreen, near where the glareshield and windscreen meet. In that position, I got a strong GPS signal from the D3’s internal antenna, and my eyeballs had a good line of sight to the unit. Plan on spending a couple of hours moving the unit around until you find the ideal position that works for you-and the device’s performance.

Dynon liberally use phrases such as “supplement your unreliable legacy instrumentation” and “portable” to reinforce the point that the D3 isn’t for primary use. Most buyers will turn on and align the D3 when starting the airplane and use it as a secondary instrument unless the primary instruments fail. My trial proved that the D3 can be used to maintain controlled flight to an uneventful landing.

For less than $900, you can purchase what amounts to an insurance policy to protect you against the risk of a vacuum failure. The Dynon Pocket Panel doesn’t do everything a permanently mounted and certified EFIS does, but it’s priced at about one-third of the typical budget EFIS.

For pilots who already have glass cockpits, or who are completely proficient at partial-panel flying in hard IFR, this might not be a necessary investment. However, the low cost and improved safety benefits make the D3 well worth considering for the rest of us.