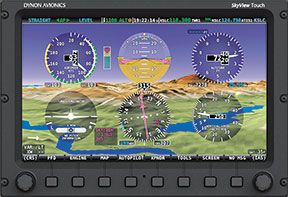 Dynon Avionics, arguably the volume leader in LSA and experimental avionics, believes that a touchscreen feature set can be difficult to operate in turbulence.

Dynon’s solution for the second- generation SkyView Touch integrated avionics suite is a hybrid user interface. With the new SkyView Touch, nearly any function that’s accomplished with touch can also be done with keys and knobs. This flexibility makes the SkyView Touch easier to sell to buyers that aren’t sold on touch avionics, while also making it easier to use in smaller cockpits.

Already own a non-touch SkyView? Dynon makes it easy to upgrade with a plug-and-play display swap, although there are some new hardware options that advance the system to a higher level.
stiffening competition

Let’s get this out of the way. Dynon isn’t alone with a new plug-and-play touchscreen system for LSA and experimental applications. Garmin’s G3X Touch system (we evaluated it in the May 2014 issue of Aviation Consumer) has attracted a lot of attention since it was introduced this spring. Moreover, nearly a half-dozen light sport aircraft manufacturers—including Van’s Aircraft, Cub Crafters and Flight Design—have chosen the G3X Touch as standard or optional equipment. That market has been otherwise dominated by Dynon. Further, the non-certified G3X Touch is the main focus in the Flight Design C4—an aircraft that’s currently being certified under Part 23 criteria. How will Flight Design do that and what does it mean for existing Part 23 models? See the sidebar on page 11. We think it could be a significant breakthrough for lower cost avionics.

But as market-dominant and bullish as Garmin is, Dynon has a loyal following of its own and for good reason. With an earned reputation for offering cutting-edge and affordable equipment that’s easy to install and widely compatible with other brands (something that Garmin has taken a hit for in recent years), Dynon had only two hardware platforms in 15 years. This attests to the company’s dedication to supporting future product growth, both in hardware and software, without the need for major rewiring or having to modify the panel layout to accommodate new boxes. This concept, and Dynon’s feature-rich user interface, is likely the reason why the original SkyView is installed as OEM and aftermarket retrofit in thousands of light sport and experimental aircraft.
three screens in one

The SkyView Touch is available in dual-or single-screen configurations and can support up to four displays.
While SkyView is also offered in a 7-inch screen version, the Touch platform is only available on the larger SV-D1000 screen—a 10.2-inch, 1024 by 600-pixel active matrix LCD display that performs well in bright sunlight. That’s a plus for canopy-equipped LSA models that get splashed with bright sun.

Each SkyView display uses two joystick control knobs (one on each side of the lower bezel) and eight hard keys on the lower bezel. Joystick and button labels are also on the screen for accessing via touch. Joystick and button functionality is contextual, based on what is onscreen. The onscreen labels show the user the button’s current active function on the lower data bar. The main data bar at the top of the display can show the status of supporting systems, including autopilot modes and transponder codes, to name a couple. We think it’s logical.

Not all panels can accommodate three or even two 10-inch displays, but a single SkyView Touch screen can be configured as a three-screen layout. For example, you can display PFD (primary flight display), moving map and engine data at the same time. It’s not optimum, but the screens are large and sharp enough that it works. We’re impressed how SkyView nicely presents a synthetic view of terrain, runways and obstacles on those big, crisp displays. It really is a brilliant view.

In a multi-screen configuration the system synchronizes the most important information between the two displays, so setting the baro, speed and altitude bugs, engaging the autopilot, or acknowledging warnings only needs to be done on one display. There’s also reversionary, where you can specify a reversion mode that automatically changes the screen configuration to a specific layout when only one display remains powered on. Then there’s swap mode, where you can swap the entire screen contents of the left and right display without having to select and deselect setup parameters for each page on each display. This seems like a nice option to have for flight instruction or flying with a partner.

The touch functionality doesn’t really change the operation of the SkyView, but instead adds another layer to the user interface, which should be reassuring to existing users and those new to touchscreen avionics. For instance, if you want to change the altitude or airspeed bug on the PFD’s altitude and airspeed tape, touch the corresponding tape and use the left joystick knob to alter the bug setting. The same goes for changing the baro setting and almost any other common function that you work with on a regular basis.

The SkyView map display is touch enabled so you can pan around the map, pinch to zoom and touch features on the map to gain more information. There’s also a direct-entry feature that’s accessed with an INFO label on the map screen. Touch it and you have access to an onscreen virtual keypad for entering waypoint identifiers, with the option for navigating directly to it. Speaking of navigating on the map, one of the nits we had with the earlier SkyView software was its inability to overlay Garmin GNS and GTN navigator course lines and approach data on the SkyView map. Software 10.0 and higher finally brings the interface to the level that users would expect.

Dynon retains its proprietary map navigation software (for more basic interfaces that don’t include a remote GPS) that gets the job done for advanced VFR navigation.

ALL EYES ON A GENTLER PART 23
As much as there is to like about Dynon’s SkyView Touch, the buzz kill is that the non-TSO system is off limits to existing Part 23 certified aircraft. In our view, it’s an outdated limitation that might have little if any bearing on system reliability and safety.

Since regulation and better judgment restricts VFR-only LSAs from flying in instrument conditions, their avionics shouldn’t be used for sole means primary navigation. In the eyes of the FAA, this limitation is supposed to curtail the risk factor should the system fail at the worst time. But IFR-equipped experimental aircraft regularly fly in instrument conditions, and have so for years with non-certified equipment leading the way. Pilots of experimentals accept the perceived risks that tag along with non-certified status. Without statistics, it’s impossible to know if new, non-Beta, non-certified systems like Dynon’s SkyView Touch and Garmin’s G3X Touch will increase the risk of crashing because they don’t have a TSO, but we suspect they won’t.

In many ways, Dynon’s SkyView Touch has more failsafe than many certified retrofit avionics. One of the areas that the FAA is concerned with is the system’s interaction with the aircraft electrical bus. But Dynon’s data and power path design helps ensure that one critical failure won’t take down the entire system. There’s also the backup battery.

But one area that’s worth considering is DO-178B software certification guidance, and Design Assurance Level. In certified equipment, this TSO-governed criteria addresses various potential failures of the software and the outcome it might have on the flight, from no effect to catastrophic. This software standard might not exist in uncertified equipment.

By now you’ve probably heard about the ARC’s (Aviation Rulemaking Committee) proposal to the FAA that could relax the certification standards for some light aircraft. How the revised rules will read, and whether it will affect aftermarket avionics retrofits and the requirement for TSO is unknown. The FAA already announced it would miss the December 2015 deadline.

The age-old standard is that an aircraft’s initial type certificate has the final say over which equipment can be installed. Flight Design is currently certifying its C4 composite single under Part 23 regulations, but is boldly attempting certification with Garmin’s non-TSOd G3X Touch. The system is such an integral part of the aircraft, it even has its own name—Flight Design Vision Touch by Garmin. That’s the C4 Vision Touch cockpit in the photo below.

Flight Design says it can get away with Garmin’s uncertified equipment because the proposed changes to Part 23 has a provision for use of non-TSO equipment when blanketed under the aircraft’s type certificate. For IFR eligibility and functionality, the Vision Touch interfaces with the certified GTN750 GPS navigator. You’ll also notice the round gauges in the center of the panel. Should the changes to Part 23 fall by the wayside, those traditional gauges could be used as primary, while the surrounding Vision Touch is technically used for backup.

Flight Design says the decision to use a system that does not have a TSO approval on its own, but will be certified together with the airframe, allows for a significantly lower price point. While the Part 23 revision is delayed until at least 2017, we’ll be following it closely.