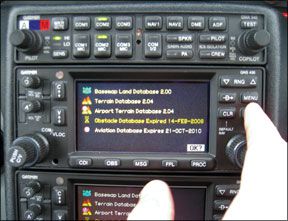 Weve been getting an increasing number of letters like this: “I will get together my Jepp bill for you. It comes to something like $17 per flight hour, figuring my decline to 150 hours per year. Nav data for two Garmin GNSs, one MFD and one PFD; all the same, but four different charges. (Granted, the two GNS get a

Thats $2500/year just for data. And that doesnt include a $50/month subscription for weather, or periodic updates of terrain and obstacle data.

On the road from four-dollar NACO chart books and en route charts to the modern cockpit, weve somehow gone off into the abyss.

How Did We Get Here?

Having the latest information in the cockpit has always been the pilots responsibility, and has always been a source of stress and misconception. The common strategy was flying with charts (VFR and IFR) and approach plates that were within the effective dates printed on the cover and calling it good. (How many folks ever updated those charts for NOTAMs dates is questionable.) Others got new charts when the existing book had too many stains from spilled coffee to read.

The advent of IFR Loran and GPS changed things. Many of these had a mandate in the manual to only fly approaches with a current database. Not that everyone always shot an approach with the latest database, but blindly trusting a cryptic interface in the clouds when you knew it wasnt current was too sphincter-tightening for most. Hardware manufacturers contracted to have the data come from a company who knew that business, and had the infrastructure to digest and deliver it (remember, these datacards used to come in the mail). That company was Jeppesen.

As more boxes got installed, each with its own data source, there were more subscriptions and more load on the wallets of owners.

What Do We Do Now?

The first real pushback on this that had some effect was probably from owners with the popular twin GNS 430 installations. They were being charged the same for each datacard and that seemed unfair. Jeppesen acquiesced, and today one year of nav data for a 400W/500W-series Garmin is $380 for the first unit and $135 additional for the second. Thats a 65-percent discount.

Nav data costs change with the system used. A Garmin G1000 or Avidyne Release 9 cockpit uses a single nav data subscription, but that data costs $415. We appreciate that each system Jeppesen supports requires the same data to be encoded in different ways, but we also hear the complaints of customers that the $35 delta feels like a surcharge on those who only buy nav data once.

But theres terrain and obstacle data, too. This data comes from Garmin directly as a subscription or one-time update. Terrain will run you about $150 for each device, and each update and obstacles run about $50 for a one-time or $195/year.

With the coming of the G600/500 retrofit glass, Garmin has started to infringe on Jeppesens traditional turf. You can buy G500/600 nav data from either source (and its Jeppesens data either way) but the price differs. Jeppesen charges $210 for a year while Garmin charges $295. However, Garmin offers a one-time update for $75, which could be a cheaper way to go if youre willing to let that data get stale for a while.

That structure is similar with Flite Charts, the government charts that appear on Garmin MFDs or the GPSMAP 696 portable. A single update is $95 and a years subscription is $395. These charts are only georeferenced on the 696 portable, but we expect that feature to hit the panel mounts as soon as Garmin can certify it. Jeppesen offers its own charts for Garmin or Avidyne systems for $905/year for the whole U.S.

Does this hint at a cooling relationship between Jepp and Garmin? Both companies say, “absolutely not.” While GA represents a minority of Jeppesens total business, its still over 30 percent. Garmin also cant supply the international data needed to support users worldwide. The companies need each other.

But its clear that everyone is seeing the subscription world as a real revenue stream. Jeppesen prints half the paper it did in 2002, while subscription numbers havent changed.

We know that part of the reason these prices are so high is that all this data flows into certified, panel-mount gear. We dont expect to see $395 lifetime subscriptions for MFD approach charts or GPS navigation data the way both can be had for portable systems. But the other part of the price equation is that data is largely a monopoly.

Garmin told us directly that theres no copyright or contractual barrier for a party other than Jeppesen creating databases for Garmin devices. For the U.S., the data (including charts and approach plates) is freely available, and several small companies have been putting it together for portable GPS devices and desktop planning programs, so the job of gathering the data is doable.

The tougher nut is encoding it correctly for the cockpit equipment, but weve heard from reliable sources that some portable GPS company employees have cracked the GNS 430s encoding and update their own databases.

The catch is that for those databases to be legal, they would need Garmins blessing and ongoing involvement every month. The current process for a database update using Jeppesens data is that they extract the needed data every 28 days and then send it over to Garmin. Garmin massages that data and adds some items of their own (they told us about 30 percent of whats on a 430s nav data card is Garmin data) and they send it back to Jeppesen for final packing and distribution. Given the mutual importance of Garmin and Jeppesen to each other, there seems little incentive for working with a third party, at least with existing devices.

But this summer Garmin offered bundle pricing on database updates for its popular GPSMAP 496 and 696 to the tune of over $700 off (about 50 percent). We think this was a direct reaction to pressure from competing products with lower subscription costs.

Ask Steve Podradchik, CEO of Seattle Avionics, about the current data crisis and hell tell you he “prefers to think of it as a data opportunity.” Seattle Avionics started out as a player in desktop flight planning and EFBs. Now chart data itself is becoming a big part of their business.

In addition to supplying Voyager users, Seattle Avionics supplies the chart data for a host of iPhone/iPad applications, the Bendix/King AV8OR and AV8OR Ace handheld GPS and, most importantly, the Aspen Evolution MFDs. The last one is critical because it crosses the line into certified devices. Seattle Avionics also now has crucial European data, including VFR and IFR charts and approach plates.

Could a nimble startup compete with the likes of Jeppesen for supplying data? Maybe. Jeppensen told us there are on the order of 185,000 nav data changes worldwide every 28 days. Thats just nav data, not charting or obstructions. Every 56 days there could be up to 5000 chart changes in just the U.S.

Podradchik isnt daunted by this, and told us theyd love to be in the market for supplying nav data for the likes of Garmin, and that they were discussing data relationships with multiple potential partners.

We could see a buyer choosing between an Aspen retrofit and a Garmin G500, or making a GPS upgrade decision, partially on the cost of subscriptions. U.S. Georeferenced approach charts from Seattle Avionics for an Aspen display are $299/year. Chart data (approaches and en route charts) for the Bendix/King AV8OR Ace is $399/year. Nav data for the Aspen displays and Bendix/King navigators comes from Jeppesen-for now.

Where all this is going is hard to say. Both the revenue from subscriptions and customer frustration is on the radar of manufacturers. While data for existing products is unlikely to get cheaper, we expect some price competition in subscriptions with new products as they hit the market.

We also predict competition over what a piece of avionics does with its data. Theres already been motion on simplifying the download and update process for cockpit data.We know Jeppesen is experimenting with smart approach systems for GA that highlight or offer certain data depending on the phase of approach. Garmin and other players hinted at similar future improvements when we talked to them.

That means we may be getting more flying help from our data in the future. Of course, that may make paying for all those updates all the more necessary. Or else well start getting letters about how the overpaid digital copilot keeps suggesting the wrong CTAF frequency.