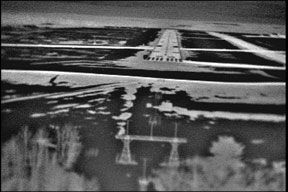 There isnt one among us who hasnt felt the butt pucker of descending towards minimums on the ILS or approaching a blackhole airport at night when we know the obstacles are out there.What would it be worth to you to see the trees, pavement, towers, and even other aircraft in rain, fog, thin clouds, smoke and darkness? Several companies have true Enhanced Flight Vision System (EFVS) that allow for

special approach flexibility under FAR 91.175, but usually these cost north of $1 million. Some companies are now offering simpler versions (read for advisory purposes only) for less than a tenth of that. We recently tried two standout forward looking infrared (FLIR) systems with different philosophies and technologies. Kollsman, Inc.s (www.kollsman.com) was the first to certify one of those million-dollar systems that uses a heads-up display and affords lower landing minimums in your Gulfstream G-V. Now theyre leveraging that technology for their General Aviation Vision System (GAViS). “Once you spend a lot of years on the technology,” says Rod Gentry, Kollsmans VP for Commercial Aviation Systems, “it makes sense to move it to another market.”

What Kollsman is moving is the latest digital sensor technology with software algorithms that optimize individual areas of the image independently to create the best overall picture. For tech geeks, they use a vanadium oxide digital microbolometer that has a NETD (noise-equivalent temperature difference) of less than 50 milli-Kelvin. What that means to the rest of us is a system that can show individual tree trunks at the far end of the runway, even when the RVR is 2500 feet or its a moonless midnight.

Seeing virga or a layer between two clouds in the dark can allow for a smoother flight, but the blackhole of night is turning out to be the surprise use for these systems. Test pilot Bob DiMeo was taxiing out in Kollsmans Cessna 340 one night when the flight engineer in the back told him there were deer on the runway.

“I looked out and I said, Where? He said, Look at your screen, Bob. And, sure enough, there they were. Thats when I thought, wow, this is really good stuff.”

We rode right-seat in Kollsmans 340 on a dark night ourselves and were amazed at what the system could see. Texture of the airport grass and the bark of nearby trees were visible. Paint stripes on the runway were visible from 400 feet on final.

Paint radiates less heat than pavement, no matter what the air temperature is, and shows up crystal clear on the screen.

In a stunning example of turning night into day, we buzzed Mount Monadnock. The only indication of a mountain outside the window was the absence of lights. Inside the cockpit, the Garmin 530 was blaring a terrain warning and the mountain was crystal clear on the FLIR display. We could have done eights-on-pylons on its peak if we could have turned the camera to look down the wing.

In the interest of full disclosure, the image is about the resolution of an average web cam-320 by 240 pixels-and its black and white.

Looking at the screen is about all there is to using a FLIR. We found that fiddling with the brightness and contrast of the display made a big difference in how the system performed. The microbolometer system also must periodically reset its sensors. Every 10 minutes, the screen goes black for one second during the reset. Kollsman found this was less distracting than having the image freeze for a second. Its distracting, but you get used to it to the point you actually stop noticing it.

The other Kollsman innovation was in mounting the sensor itself. Rather than being in a pod under the wing like a small radar system, the entire camera is built into an antenna mount, about the size of three marker beacon antennas placed side-by-side. This should make the installation and STC process as simple as practical. GAViS should be certified on the Citation at $92,500 by spring 2007. Kollsman will partner with other distributors and have them do the STC packages for additional aircraft.

Forward Vision (www.forward-vision.net) is just about the polar opposite of Kollsman. The company exists because a friend of Pat Farrell, Forward Visions

president, crashed short of the airport on approach. “I was literally picking through the woods looking for his body when I started thinking of this stuff,” says Farrell. “It was low, it was nasty, it was dark and hed flown all day in his Aerostar. And he was one of the careful guys. Well trained and careful.”

Forward Vision took the opposite approach and took decades-old, off-the-shelf technology to build a FLIR. Its an analog barium strontium titanate (BST) system that sports the same 320 by 240 pixel resolution, but has a half the sensitivity of the Kollsman system. The BST system has a few tricks of its own in that it uses a mechanical “chopper” wheel to reset the display, so there is no blackout. Its also much cheaper than the digital microbolometer. The entire Forward Vision system is priced at $18,500 and, to generate more interest, Forward Vision is selling their first 100 systems at $9995.

We flew the Forward Vision system in Farrells CompAir 8, which is a six-seat, turboprop tailwheel. The camera is mounted where the right strut meets the wing in a wing pod thats a bit more of an installation challenge than the GAViS antenna mount. Forward Vision is considering other mounting options and have yet to commit to one for certification.

We found it easy to taxi using only the image on the screen. Interestingly, the lower sensitivity camera produced a clearer image on the cockpit display than the more-sensitive Kollsman. The Kollsman system is sensitive enough to see variation in the temperature of the paint on a runway stripe. The Forward Vision system cant, so it displays it as a solid, uniform line. In the air, the image is grainier than Kollsmans, but still plenty clear to identify buildings and obstacles, as well as roads and fields that would be potential landing sites. Other airplanes show up as white spots (from engine heat) as much as 3 miles away.

The day we tested the system, nearby thunderstorms kept us from flying full approaches, but scud-running through mist and rain demonstrated some strengths and weaknesses. Depth perception is the hardest thing to interpret and houses, roads and towers on the display look further away than they really are. This was true of both displays, but more prominent with Forward Vision. Rain significantly attenuates the image, meaning you cant see through it well. Even in heavy virga, the picture on the FLIR was always better that out the window, but not by much.

Looking through thin clouds was another matter entirely. While focusing on the FLIR during the test, we started to fly into a cloud without realizing it because the image on the screen looked right through it. (Farrell politely suggested we descend a bit.) The experience was stunning and a strong endorsement of the units ability. This effect is often only true close up and at the bottom of clouds where they start to break up. Clouds at a distance are visible if theres nothing but sky behind them, meaning you could use the system to stay VFR at night. Smashed bugs on the lens dont degrade the image at all. The lens is also heated to prevent ice accumulation-just in case. Back in the pattern on a cruddy day, rain and mist obscured the visible world, but the screen clearly painted details in black and white wherever it looked.

Forward Visions system automatically adjusts for system voltage from nine to 30 volts. Theres also a security interface that prevents anyone who steals the camera from using it (like an anti-theft radio). They are finalizing input from the GPS of your choice to put groundspeed and track on the FLIRs LCD display via an RS-232 link. Both systems can actually output to any NTSC-capable display and both weigh less than four pounds.

Part of the deal is a battery backup system that can power the FLIR and the LCD screen for several hours. Forward Vision is partly owned by CompAir and a CompAir test pilot had an ADAHRS failure at night that started him down the road to a graveyard spiral. It wasnt until the visual horizon on the FLIR LCD disagreed with the PFD that he realized he had a problem. He ended up completing a full roll through inverted flight and flying home with the FLIR providing his primary attitude reference.

Is it Worth it?

When a tool saves your life, no price is too high, but few of us will ever be in that situation. Breaking it down, we see three factors in play here. The technology is up to the task and looks robust and reliable. While the Kollsman system is a superior performer in almost every sense, were not sure that matters much in practice. Forward Vision provides nearly the same gain of situational awareness for a fraction of the cost. You dont need to see the deers spots to know theres something on a dark runway that shouldnt be there and to go around.

Kollsman, however, is well on its way to overcoming the hurdles to installation on certified aircraft. Forward Vision has less experience in this arena and is making slower progress. Wed like to see a few completed 337s confirming that a pod under the wing isnt an issue. This should be no different than a small wing-mounted radar pod, but theory and reality often dont match well in aviation.

Early adopters of the Forward Vision system will have their share of headaches, but an additional $8500 discount might be a fair trade for this hassle. Forward Vision is also exploring mounting the camera in place of either a landing or taxi light on aircraft that have both and a storm-window mount that would be removable and require no paperwork at all.

Kollsmans price makes it impractical for most GA airplanes. Even Forward Visions price leaves us swallowing hard. Eighteen grand is quite a bit more than youd pay for a traffic-awareness system or TAWS, which might be a good comparison. But neither of those can see deer on the runway or tall trees when you stray right of the localizer. As we said, peace of mind comes at a different price for everyone.

Jeff Van West is editor of