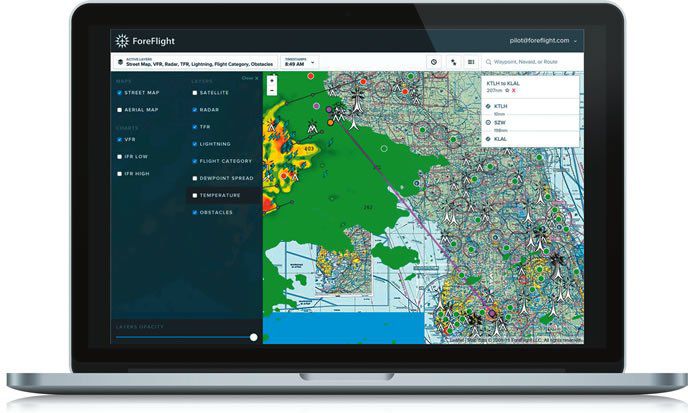 For a while it seemed that desktop flight planning was headed for extinction, replaced by do-it-all tablet computers running apps that capably serve double duty as flight planners and cockpit navigators. At Sun ‘n Fun 2015, navigation app developer ForeFlight introduced a new web planner that automatically interacts with its iOS Mobile navigation app.

Plan it on a Big screen

ForeFlight Web for use on iOS desktop computers replicates much of the look and feel of the ForeFlight Mobile app for iPad and iPhone.

It has the same map layers as you’ll find in the Mobile app, plus it overlays weather radar, TFRs, METARs, AIRMETs, SIGMETs and satellite imagery. It’s all stuff that you would want to see during preflight planning, but in a larger form factor than it is on a tablet.

The menu structure for ForeFlight Web is accessed on the left side of the screen where you can select street maps or aerial maps, plus VFR, low IFR and high IFR maps.

ForeFlight Web has a cut-to-the chase search function, operating on top of its global navigation data, while automatically synchronizing data from the desktop to the iPad or iPhone via ForeFlight’s Connect data syncing system. It’s similar to the way ForeFlight syncs data from an iPhone to an iPad, using cloud-based data transferring of routes, favorites and other user-specific data. We think ForeFlight did a good job of keeping the planner simple.

For example, let’s say you wanted to plan a direct route from Greenville-Spartanburg Airport in South Carolina, to Tampa Executive Airport in Florida at 170 knots. Simply type KGSP KVDF 170 in the dedicated waypoint search field (which has autocompletion, based on waypoint identifier) in the upper right corner of the screen. The program creates a visual preview of the route overlaid over a VFR sectional or IFR enroute chart, which also has weather overlay. From there you can load the route as a flight plan and make it a “favorite,” which immediately appears on the ForeFlight iPad app. Route data can also be transferred from the tablet app to the desktop.

An extremely useful feature is the planner’s ability to include stadium TFRs, something that isn’t always included in other flight planning tools. Consider that our home field at Brainard Airport in Hartford, Connecticut, is adjacent to the University of Connecticut football stadium—a TFR that’s easy to bust without closely monitoring game schedules. ForeFlight monitors event schedules for Major League Baseball, the NFL, NCAA football, Indy Car, NASCAR Sprint Cup and Formula 1 events and integrates that information into the TFR layer in ForeFlight Web.

A beta version of ForeFlight Web can be requested on www.foreflight.com. We’re currently evaluating other desktop planners and will report on them in a future issue.

Included in the latest revision 7.0 is ForeFlight’s Procedure Advisor. The new feature allows you to first preview arrival, departure, approach and VFR traffic pattern procedures before loading them into the active flight plan.

It works by first entering a departure and destination in the Route editor and then tapping the Procedure button in the Edit view. A separate window displays the available procedures. Tapping each procedure then previews the procedure onscreen.

For instrument approaches, a flag appears on the best wind runway, based on the current METAR. Once you select an approach, you can preview different entry points on the actual approach plate. Select which one you want and then use the Add to Route command.

The Cabin Altitude Advisor uses the barometer that’s integrated within the Apple iPhone 6, 6 Plus and iPad Air 2. When passing through 12,000 feet and 25,000 feet (MSL), the app triggers an audio and visual alert once every 30 minutes for each altitude. The advisory function is enabled in the Settings menu, where you can independently select audio and visual alerting.

The bugaboo with downloading charting and navigational data is the amount of disk space it occupies on the tablet. For larger downloads, you might have to delete apps and other data just to make room.

ForeFlight attempts to reduce the required disk space with its Delta Download feature.

ForeFlight says the feature can also reduce the download time up to 70 percent, since the new system only delivers data that’s changed each month. Another welcomed improvement is found in the Downloads view, where VFR Tacs and Sectional charts are listed by the chart name instead of their location.

Last, the version 7.0 upgrade includes Chart Touch, which enables the viewing of Sectional and IFR enroute chart legend panels directly in ForeFlight’s Maps view. It’s uncommon to find chart margins in many tablet apps, but ForeFlight has added them, making it easier to transition from each chart on the map. Simply tapping anywhere on the map brings the chart forward and it shows the margin data for a given chart.

The base yearly ForeFlight Mobile subscription is $74.99 and the flagship Pro version with synthetic vision is $174.99.