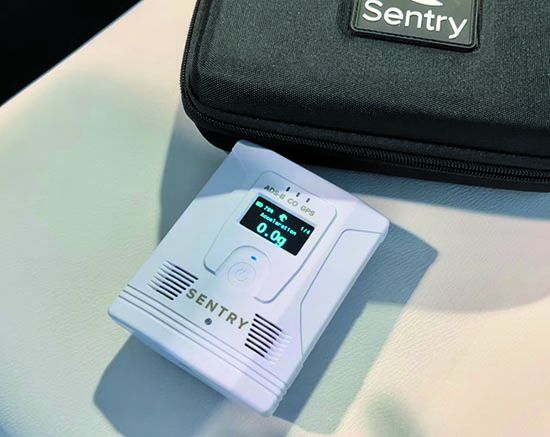 In a market long saturated with portable ADS-B receivers, ForeFlight tosses a new model in the mix. Still, the $799 Sentry Plus could have enough smart features to attract the attention of buyers looking to replace aging vintage models, or even those who want to supplement new panel avionics.

At first blush, the 1.3-inch OLED display-equipped Sentry Plus seems large by modern standards, but there’s a lot packed into the 4.3 by 3.3 by 1.3 inch chassis. The device weighs 0.46 pounds and comes with a suction mount (attached via 1/4-inch-20 bolt tripod hardware) for window/surface mounting. In addition to external power input, power is also provided by an internal battery that has an 18-hour endurance, which ForeFlight says is the best in the market. What makes that battery life more impressive is the number of onboard sensors it has to power.

There’s an internal WAAS GPS receiver (for inputting position and speed on the ForeFlight app), a dual-band ADS-B traffic receiver, a FIS-B ADS-B weather receiver, an internal AHRS, plus onboard storage for weather replay and flight data recording. The device has an internal Wi-Fi receiver for connecting with up to five devices at once—which is a lot when you think about it. With a built-in baro pressure sensor, the Sentry Plus displays cabin pressure on its OLED display, in addition to displaying the data within the ForeFlight Mobile app. The device is smart enough to turn itself on and off (when wired to the avionics master switch) to save battery life, and the display shows whether or not the device is connected to the ForeFlight device. There’s also a G-load function that shows the current value on the display and in the app.

We like that the Sentry Plus comes standard with a built-in CO detector. While the display won’t change when the detector is triggered, there’s a high-pitched alarm that can be heard even when wearing headsets. 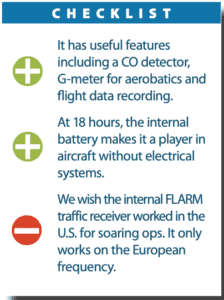 If you fly gliders, you appreciate the utility of FLARM traffic alerting. This is an air-to-air traffic protocol with pictorial targets displayed on a map display. And while the Sentry Plus has a built-in FLARM traffic receiver, we think it’s a missed opportunity for glider ops in the U.S. because it only works with the European SRD860-band FLARM standard. For U.S. soaring, the Sentry’s ADS-B traffic will have to do.

The Sentry Plus comes with a RAM suction mount, a charging/power cable and a carrying case, and it’s sold exclusively through Sporty’s. The device was developed in collaboration with and is manufactured by uAvionix. It’s not the only portable ADS-B receiver in the ForeFlight lineup, but stands with the $299 Sentry Mini and $499 Sentry.