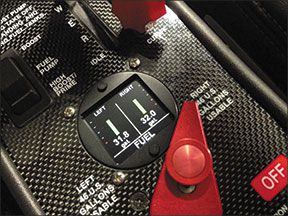 The preliminary NTSB report for a parachute-deployed Cirrus SR22 wreck says, in part, “Initial examination of the airplane by an FAA inspector did not reveal any visible fuel in the airplane’s fuel tanks, nor were there any indications of a fuel spill at the accident site. After the airplane was recovered, approximately 26 ounces of fuel was drained from the fuel system.”

We have to wonder if the pilot flying this Cirrus was relying on the potentially inaccurate fuel gauge that some earlier-gen Cirrus pilots are familiar with. If he was, it’s the kind of accident that Oregon-based CiES, Incorporated is trying to address with its FAA-approved digital fuel level sender retrofit, which also includes an FAA-approved primary replacement fuel quantity gauge.

We retrofitted the setup in our first-generation SR22 test bed, and while it’s not perfectly accurate—or inexpensive—it outperforms the OEM arrangement.

Magnetic Float
On earlier Cirrus models, fuel quantity is measured with typical analog float-type quantity sensors installed in each fuel tank (there’s a main and collector tank in each wing, with a single fuel sender for each inboard and outboard tank).

The measured fuel quantity for the left and right tank is read on the mechanical fuel quantity gauge that’s mounted on the center console, above the fuel selector. In later models equipped with the Perspective G1000 avionics suite, the fuel quantity information is first sent to the engine/airframe unit (EAU), processed and transmitted to the onscreen electronic fuel quantity display (and CAS window). But this digital quantity display doesn’t improve accuracy, since it’s the older analog fuel senders that are the culprit for fluctuating fuel measurement. Current Cirrus models (from 2012 models on) incorporate the CiES digital senders as standard equipment. The retrofit kit is available for all SR20 and SR22 aircraft not so equipped.

To appreciate the accuracy that a digital fuel sender can provide is to understand the shortcomings of the average mechanical float-style sender, which in many applications were born from typical automotive senders. Automotive resistance-type ceramic sensors that are reconfigured for use in aircraft often fall short in performance due to the large quantity of fuel that’s stored in an aircraft fuel tank. A signature trait is the fluctuation in displayed fuel quantity as the sender’s resistance wiper moves.

You’ve likely heard the tongue-in-cheek adage that aircraft fuel gauges are accurate when the tank is out of fuel. That’s true, as many fuel gauges are calibrated for the empty and full position. The other problem is the fuel itself. Unlike automotive applications, the same fuel often remains in the tank for long periods of time, allowing impurities to build up on the measuring resistors. Over time, this can have a negative effect on the resistors’ value and overall accuracy.

The CiES digital sensor is magnetoresistive or specifically, AMR (for anisotropic magnetoresistive). According to CiES, this magnetic fuel sensor is proven to work well in a variety of temperatures and conditions that aircraft fuel tanks are exposed to, including the extreme sloshing of fuel within the tank (especially in turbulence). It’s also compatible with alternative fuels, reports CiES.

The AMR sensor operates on the scientific theory that the electrical resistance of ferromagnetic alloys are influenced by external magnetic fields. Simply put, the fuel sensor always points to the measuring float (like a compass that always points north, no matter how you move). The design of the sensor has a safety advantage since there are no wires or traces of resistance inside of the fuel tank. Instead, the CiES sensor utilizes a magnetic pickoff located on the float arm, which is detected by the non-contact sensor on the outside of the tank.

The digital fuel sensor has more than one advantage. It converts the changes in fuel quantity (which the internal sensor sees as a change in voltage or resistance) to a digital signal. Computed fuel level is transmitted through a simple digital databus, cleanly transferring multiple pieces of fuel level data to a multifunction display. CiES uses a similar digital sensor to measure TKS deicing fluid levels.

STC-approved as a primary gauge, the FL202G has a 65,535-color LCD display and mounts in the same cutout as the original fuel quantity gauge. It connects with the fuel sensor wiring through a DB25 interface connector.

We found the display to be readable from a wide angle. This is important because in the Cirrus, the control head is mounted on the center console—an awkward location.

While there’s a dedicated remote dimmer potentiometer for adjusting the display backlighting, we would like to have the display connected to the main instrument dimming circuit. For now, it’s not compatible with the Cirrus dimming bus, so it requires a dedicated control.

There are two buttons on the bezel. The top button advances between display screens, selects an action from a menu and is used for programming. The bottom button is used to select the measured quantity in the left or right fuel tank.

The FL202G display comes preprogrammed with specific Cirrus aircraft data, while the values for usable fuel are set during instrument calibration. For instance, the fuel quantity red line on the SR22 is less than 0.1 gallons, yellow line is between 0.1 and 14 gallons and the green line is for all quantities greater than 14 gallons. The default screen displays the quantity level for each tank in a color vertical bar format, plus a numerical value below the bar.

We found the quantity display intuitive to interpret at a glance. There’s also a fuel imbalance warning, which is set during programming. A flashing yellow bar on either tank designation indicates a fuel imbalance condition. The flashing tank indication will be that of the tank with the most fuel. In the SR22, a 10-gallon imbalance will trigger the alert. We think this serves as a useful reminder to switch tanks. On the other hand, missing is an audio output that would eliminate having to keep an eye on the gauge. While this would complicate the install, it would be nice to have the option.

While we like the gauges’ trend- graph function, which provides a scrolling line graph of the total fuel used from each tank (since the last power cycle), the onscreen nomenclature took some guesswork without first reading the manual.

Installation
The installation on our G1 Cirrus was performed by Advanced Aviation in Lancaster, Pennsylvania. According to Joel Glover, director of maintenance at Advanced, his shop has performed nearly a dozen CiES fuel sender retrofits to date on a variety of Cirrus models. Despite the shop’s experience with the installation, the aircraft was down for a week. The cost of the project was just north of $5000, including parts and labor. The sensor kit has a list price of $3000.

Nearly all of the existing mounting hardware is utilized when installing the new CiES sensors. While that simplifies the installation to a certain degree, it creates a compromise when it comes to absolute accuracy. CiES founder Scott Philiben says he has test data that proves the senders can yield tighter accuracy than you’ll see in G1 and G2 Cirrus models.

“Installers have to put the new measuring floats in the exact same locations as the old ones to comply with the STC. FAA issues aside, it’s not economically feasible to disassemble a wing and fabricate new nut plates to house the senders in a location that affords better measuring performance. While Cirrus made sizable improvements with the tank design (and the ability to measure fuel more accurately) in the G3 and G5 models, sensor performance in earlier models can be unpredictable by comparison,” he said. Philiben adds that he strives for a two-gallon accuracy—a claim that we confirmed after flying our CiES-equipped G1.

As you might expect, proper system calibration is essential to accurate readings. This requires draining the fuel tanks and then adding fuel at two-gallon increments while the aircraft is exactly level. Our recommendation is to use a shop that has plenty of experience with Cirrus models and has accomplished at least several CiES retrofits. Contact www.ciescorp.com, 541-408-1095.