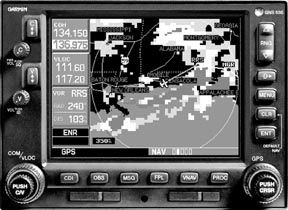 In fits, starts and dribbles, the age of digital weather in the cockpit is upon us. But its neither full-blown nor, in our view, necessarily ready for market. But when has that stopped an enterprising avionics company from shipping products anyway?

As we reported in Septembers exhaustive survey of the aircraft datalink offerings, the market-such that it can be called that-is chaotic and confused, with several discrete technologies competing for limited owner dollars.

One of the earliest to make it to the finish line is Garmin, whose satellite-based GDL49 is finally ready to ship late this summer and into the fall. We flew a demonstration version of the system recently, in Garmins testbed Beechcraft Baron.

Although it can legitimately be called a front runner, Garmins entry in this field is quite late, by its own standards. Based on estimates from the company and the fact that Garmin bought the necessary satellite technology from another company, EchoFlight, we assumed the system would launch a year ago. Garmin, doesnt, after all, have a reputation for flogging vaporware, at least for more than a few months.

But when companies collaborate on technical projects, there are, shall we say, culture clashes and differences of opinion that slow project development. Garmin seems to have gotten by those hurdles thus far. The hardware is available, works as advertised and you can install it now and expect adequate satellite coverage.

Its based on the EchoFlight system, which relies on Orbcomm low earth orbit satellites to deliver data via request/reply.

In other words, unlike other systems which broadcast data continually, the Garmin/EchoFlight unit is dormant until you tell it what you want. At that point, it sends the request to the appropriate satellite and retrieves the data for display.

Menu Driven
Datalink functions are controlled via a menu found on one of the spare navigation pages. Using the navigators large knob, you scroll to that page, step through the menu and request the weather product you want. Presently, that includes NEXRAD images for a specific radar site or within a radius of a specified waypoint, textual METARs and what are known as graphical METARs, which combine ceiling and visibility in an at-a-glance, color format.

We suppose having METARS is nice but the real reason youd dump this much dough into a datalink system is for NEXRAD, the FAAs state-of-the-art weather radar imagery.

There are several ways to fetch NEXRAD using the Garmin system. One is to simply specify a three-letter identifier and allow the system to find the appropriate radar site data. Another is to ask for the radar within a specified radius of a fix or airport.

Then comes the wait. Because this is a request/reply system, the two-way trip may take awhile. Quite a while. On our test flight, we noted retrieval times between two minutes-not bad-and 12 minutes, half a lifetime if youre getting antsy about what lies ahead. We also noted that at times, the satellite coverage is momentarily not available, as with GPS in the early days of the constellation. At press time, Garmin told us improved software had cut down delay times substantially. Moreover, Orbcomm envisions improvements that may make its request/reply architecture behave more like a broadcast system, as with Bendix/King and the newcomers, Merlin/Satellink and WSI/Pilot Advisor.

We tried the system on the ground and found that it worked well enough, thus it would be a good go/no-go tool in the event that thunderstorms blocked a potential departure route.

Scale Up/Down
The day we flew the system, there was no weather locally so we examined NEXRAD snapshots from the Houston area, which was getting pummeled by mid-afternoon thunderstorms. The NEXRAD image first appears in its entirety, looking like a yellow and red marble in the middle of the screen.

Scaling in on the picture reveals ever more detail, including local fixes and airports and surface background detail on the Garmins map. The display is precisely geo-referenced so you can tell exactly where the weather is relative to where youre going. Or at least you can tell where it was, due to unavoidable delays in processing and transmitting. (See the sidebar for an explanation.)

Further, due to limitations in radar and display resolution, you cant exactly scale down to the neighborhood level. The images begin to get blocky and less useful at ranges below 100 or so miles.

Data is transmitted in packets and when theres a lot of it-during active convection-the system saves bandwith by decreasing image resolution. That means when you most need a detailed look at storm activity, it may not be there, although serviceable images should always be available.

Obviously, this is a gross look-ahead system, not a tactical avoidance tool. This may improve with time, but for now, NEXRAD in the cockpit is sharply limited in terms of timeliness and resolution.

METARs appear in text format, just as you would see them on DUAT. Graphical METARs appear as symbology on the screen relative to the aircraft position.

Cost, Operation
The GDL49 retails for $3495 and requires a conventional comm antenna, although it can timeshare with an existing antenna. Installation and wiring to Garmin boxes appears to be straightforward. At the moment, the system wont support other displays; Garmin is the only game in town. (Ya think they planned it that way?)

EchoFlight offers a Chinese menu of services at various price points. The cheapest is $9.95 a month, which offers la carte services based on each request/reply transaction. You pay the monthly fee plus a buck a pop for NEXRAD, METARs, e-mail and position report updates. (The system can handle rudimentary e-mail and can send position reports to ground sources.)

This tariff schedule makes sense to us and allows bottom feeders occasional access at a reasonable rate while the more affluent can pay more and get more.

Whether the revenue will continue to support Orbcomm remains to be seen. The company was launched by a partnership including Orbital Sciences in 1997 with a constellation of what eventually became 30 low-earth orbit satellites.

Its market was intended to be niche communication, datalink and vechicle tracking. But flagging sales put the system into bankruptcy in 2001 and its assets were sold and the system was reorganized into Orbcomm LLC. At least one other aviation provider, Avidyne, is also using Orbcomm.

Operationally, the system is relatively easy to use, although its not as convenient as the Bendix/King system, which downloads weather continuously and displays it right on the navigation map, with no pilot action required. With the Garmin system, you have to be in the loop, actively requesting what you want and when, based on what knowledge of conditions you happen to have from other sources. However, once retrieved, the Garmin does show the weather on the navigation maps.

EchoFlight hasnt exactly flooded the market with this technology and the only reader weve heard from who has bought it phoned to complain that it didnt work well because of electrical noise in the airplane. Garmin confirms that the system is noise sensitive and requires careful antenna location.

Conclusion
Has Garmin popped one over the fence again with the GDL49? At this juncture, we cant tell. The system appears to work, albeit not at impressive download speeds; youll have to be patient.

The cost is reasonable but it also requires active participation to select weather products in the way that the continuous broadcast products dont. This may evolve or improve in the coming months.

If youre desperate for this technology now, the GDL49 will get weather into the cockpit and it appears to be well supported by Garmin and EchoFlight.

But we think its wiser to wait awhile and see what datalink products come down the pike in the next year to 18 months. Thus far, none of the systems seem to be hands-down winners.