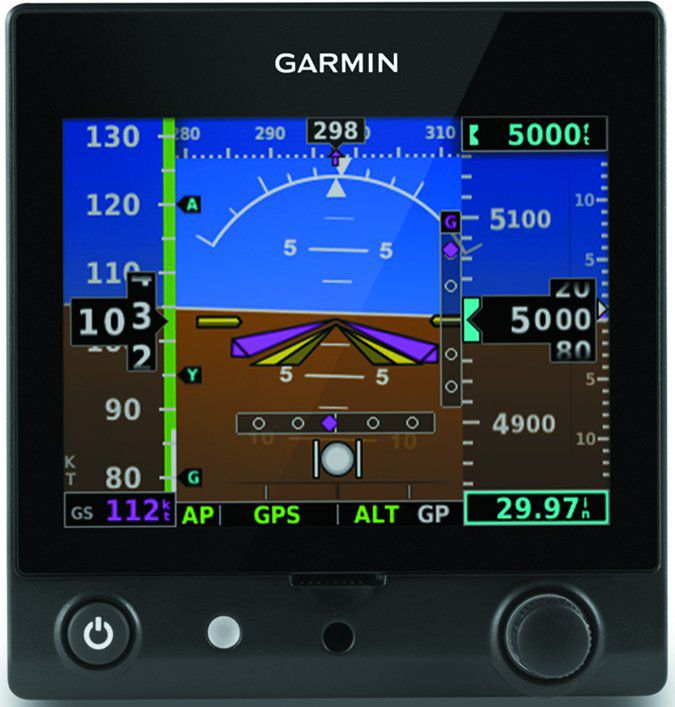 While evaluating Garmin’s new G5 electronic flight instrument, we couldn’t help but look beyond its target market of light sport and experimental aircraft. At first blush, the instrument is packaged perfectly for use as a primary attitude instrument in vintage steam gauge-equipped panels, fitting in the 3-inch attitude instrument cutout.

But Team X, Garmin’s engineering team that’s tasked with developing products for the LSA and experimental market, had other plans for the G5, designing it as an EFIS to back up—and integrate with—the PFD in its G3X Touch integrated avionics suite. Mention FAA certification to these guys and you’ll hear their laughter echo across the state of Kansas.

Team X might walk one of its uncertified G5s down the hall to its certification brethren, because within a week of its introduction, Dynon announced the STC approval for installation of its uncertified EFIS-D10A in certified aircraft. With a starting price of $1200, we think the G5—or something spun from its concept—could give Dynon a run for its certification dollars and buyers another good option for an affordable EFIS.

More Than an Attitude

While the G5 is first and foremost an attitude instrument, it displays far more data than pitch and roll. Think of it as a full-up EFIS with a built-in air data computer, WAAS GPS, external navigation interface, autopilot control head and a defense against electrical failures with a rechargeable lithium-ion battery. Garmin says the battery (which is optional) can power the G5 for up to four hours.

Aside from its redundant display, it also serves as an instrument source backup to the G3X Touch. During a G3X ADAHRS failure, the G5 supplies the appropriate air data, attitude and heading information to the G3X panel displays.

The instrument, with its 3.4 by 3.6 by 3.6 inch chassis (just 2.1 inches deep without the battery), is dwarfed by Garmin’s 10-inch G3X PFD, but the G5’s bright LCD display with LED backlighting makes up for its small stature. The 3.5-inch QVGA display (it has a 20- by 240-pixel resolution) is readable from wide viewing angles and our eyeballs would be comfortable looking at it as a primary source of data on a small instrument panel. There is a lot of data packed in a small area.

The G5 can replace all of the traditional six-pack flight instruments—a possible application for LSA and experimentals—or used for backup. There are minimal controls on the bottom of the bezel, including a rotary function knob, an on/off power button (which serves double duty as a display backlight control) and a microSD card slot for software updates.

The G5 has two main pages: the PFD page and the HSI page. When in the PFD mode, the entire left portion of the screen is occupied by an airspeed indicator/rolling number tape with color-coded speed range strips, plus a magenta-colored airspeed trend vector line. The end of the trend vector corresponds to the predicted airspeed in six seconds if the current rate of acceleration is maintained. Like most PFDs, the G5 can be configured to display V-speed markings on the tape. A data block at the bottom of the speed tape displays GPS groundspeed.

Attitude information is displayed over a virtual blue sky and brown ground with a white horizon line, which is also part of the pitch scale. Pitch markings are spaced at 2.5-degree intervals and a yellow symbolic aircraft corresponds to the current pitch attitude. There is also a dual-cue autopilot command bar presentation when the G5 is interfaced with Garmin’s autopilot. More on that in a minute.

A slip/skid indicator is positioned at the bottom of the display, along with a magenta turn rate trend vector. The right side of the display houses the altimeter with a rolling number tape, and a selected altitude bug is in a dedicated box at the top of the altitude tape. A bug corresponding to this altitude is shown on the speed tape. We really like that the selected altitude is synchronized with other displays in a G3X suite over the CAN network—eliminating the need to enter the data twice or more times. The baro setting is also synchronized between displays, or it can be set with the bezel knob on the G5. Pressing and holding the knob syncs the selected altitude to the current altitude. The vertical speed indicator display is a non-moving tape with tick marks every 100 feet, with the current vertical speed displayed using a white arrow along the tape.

A heading/ground track tape is displayed at the top of the PFD page and will indicate magnetic heading when a magnetometer is connected over the CAN network, which is synchronized with the G3X. A light blue heading bug is displayed on the heading tape and on the dedicated HSI page, which is a familiar rotating compass card in a heading-up orientation. To adjust the heading bug, select Heading or Track from the menu and use the control knob to make the change.

A bearing pointer can be displayed on the HSI as a raw nav data source (VOR/localizer) or GPS. Color coding indicates the navigation source in use: magenta (for GPS) or green (for VOR and LOC).

When connected with the G3X and G3X Touch system, the G5 serves as a fully redundant navigation indicator, with instrument approach guidance, although there is no synthetic vision. You might see it in the future.

The ILS VDI (glideslope) is depicted as a green diamond and appears to the left of the altimeter. It also displays GPS vertical course data (differentiated by a green diamond) and is analogous to the glideslope for all types of WAAS GPS approaches, including LNAV+V. The lateral CDI for GPS/ localizer data is positioned at the bottom of the attitude display.

Changing the displayed navigation source (GPS and VOR/localizer) is done directly from the external navigator. Compatible sources include Garmin’s GTN750/650, GNS530/430, GNC255 navcomm or SL30 navcomm. Additionally, when connected with a portable GPS that’s outputting NMEA RS-232 data (Garmin aera660/796/795), the G5 can display a VNAV profile. This is a magenta chevron overlaid on a VDI scale positioned to the left of the altimeter. That’s a smart utility.

In VS mode, the flight director maintains the aircraft’s current vertical speed to the nearest 100 FPM. The mode is also used for climbing and descending to a selected altitude, since the selected altitude capture mode is automatically armed when the vertical speed mode is selected. Yes, Garmin’s integrated autopilot is a seriously capable system and the G5 EFIS can play an integral role in its operation. It can be configured as a standalone autopilot controller or as a backup system for the G3X, but still requires a GMC307 or GMC305 panel control head.

Will It Cross Over?

In our estimation, should Garmin choose to play in the evolving market of uncertified avionics for Part 23 aircraft, its G5 EFIS could be perfect for getting its feet wet. At $1350 with the backup battery, it seems like a logical competitive product to Dynon’s STC-approved EFIS-D10A—a standalone EFIS that’s expected to be priced in the $2000 range.

A certified version of the G5 could be used as a backup for retrofit and OEM glass panels—a market that’s currently occupied by Sandia and L-3, but at higher price points. For now, the G5 is limited to LSA and experimentals and we think it deserves more. Contact Garmin.com.