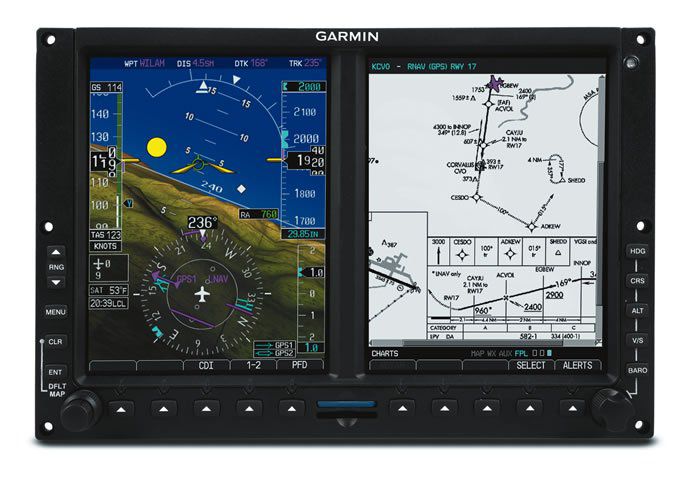 In avionics life, nine years is a long time. That’s how long Garmin’s G600 retrofit primary flight display has been on the market. While that’s long enough for a product to lose its tech edge, Garmin generally doesn’t let that happen.

Luckily, periodic software upgrades can give an otherwise aging product a new lease on life, although FAA certification can limit major changes without requiring a time-consuming and costly recertification process.

Still, Garmin has been taking some heat for the system’s inability to interface with the GDL88 ADS-B transceiver, the lack of georeferencing on Garmin’s FliteCharts, lack of Stormscope interface and some other missing features that buyers expect from a system in this price category, including a touchscreen interface. The latest GDU display version 7.0 software upgrade steps the system up several notches and finally brings it into the age of ADS-B, but doesn’t give it a touchscreen.

Perhaps the most important enhancement to the system is its compatibility with Garmin’s GDL88 ADS-B system, where traffic symbology is displayed on the MFD and on the PFD in units equipped with Garmin’s SVT synthetic vision option.

We think TargetTrend offers better functionality on the GTN, which is enhanced by its touchscreen feature set. For example, since TargetTrend groups traffic targets together to declutter the screen, the user can easily ungroup them and show more details about a threat target by simply touching it on the screen. The non-touch G600/500 requires knob scrolling. Not a huge deal, but not as seamless as touch, in our opinion.

Garmin has also added TerminalTraffic, a feature that displays taxiing ADS-B-equipped aircraft and moving ground vehicles (while differentiating them using distinct colors and symbology) in the airport environment. This data is displayed on the airport surface chart.

Speaking of charting, a major enhancement in version 7.0 addresses the system’s mediocre mapping performance. If you’re accustomed to operating the system with the previous software, you’ll find much improved base maps. They have a more modern, vibrant appearance.

Garmin said the new mapping technology it incorporated in the new G600/500 comes from the GTN750/650 navigators. We found that map redraws and range changes are faster than in the previous software.

A nag we’ve always had with the G600/500 is the lack of georeferencing with Garmin’s NACO-based electronic FliteChart feature. Georeferencing is the overlay of ownship data on the charts. FliteChart is Garmin’s default charting product (it’s also standard in Garmin’s GPS696 portable GPS and in the Pilot tablet app) and comes preloaded in a new G600/500 without the need to buy an unlock key to enable the feature.

Previously, to get georeferenced charts you would have to purchase the $2395 Jeppesen ChartView feature unlock option, in addition to a Jeppesen charting subscription. An annual FliteChart subscription for North America is $499.

With the new mapping, Garmin added Smart Airspace, a feature found in the Pilot tablet app. The function automatically highlights the airspace nearest to the aircraft’s current altitude, while drawing less attention to irrelevant airspace.

If you’re confused about whether to buy the G600 or G500, part of the buying decision depends on the aircraft it’s going in.

While both systems have a variety of TSO approvals for use as primary flight instrumentation, in addition to a liberal AML-STC (approved model list), the G600’s higher level of software certification makes it a player in Class 3 aircraft. In general, these are larger piston and turbine models between 6000 and 12,500 pounds. Those larger aircraft generally require Level C software certification status, compared to Level B in smaller aircraft, as one example. Both the G600 and G500 have nearly identical installation processes and require either a GTN or GNS-series navigator for GPS position and nav signal input.

Moreover, both systems share the same dual 6.5-inch diagonal color screens housed in a single bezel. Fly with either system and it’s unlikely you would recognize a difference.

But pricing is another matter. Major functions which come standard on the G600 are optional on the G500. This includes the GAD43 autopilot gyro emulator, SVT synthetic vision software, out-of-the-box compatibility with Garmin weather radar systems, plus built-in, certified TAWS-B terrain alert functionality, which is only available in the G600.