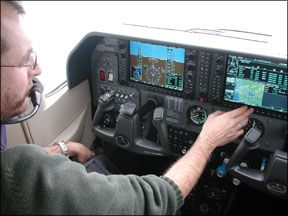 The correct name is the Garmin GFC 700, but most buyers think of it as the built-in autopilot for the Garmin G1000 flight deck. Youll find essentially the same system installed on aircraft from Citation Mustangs to Diamond DA40s. That could mean that the jets have an inadequate system or that the light pistons get jet-level equipment. Its the latter. The GFC 700 is, in a word, impressive.

Because the system is deeply integrated into the G1000 flight deck itself, its hard to simply describe the autopilot. Its also tough to make global statements because the exact implementation varies with different makes and models. Well focus

primarily on how the GFC 700 works in a piston-powered airplane, but understand that its performance is largely similar for the kerosene crowd.

In our own flight tests and talks with others, everyones experience is that the new autopilot flies with greased-rail smoothness. This comes partly from the physical systems and servos that use the latest technology, but also from the data thats available to the system. It gets inputs not only from the Attitude Heading Reference System (AHRS), which is the digital equivalent of an attitude gyro, but also the GPS and air data system. This yields a degree of attitude sensitivity impossible with an iron gyro or a turn-coordinator rate-based system and it delivers the ability to anticipate control scenarios rather than react to them.

Small deviations between where the wind is drifting the aircraft and the correct track on an ILS approach are corrected before theyre detectable to the pilot, for example. Light turbulence did get the system making quick and aggressive corrections, but no more than was necessary. We also had some fun with a Cessna 182 we were flying by alternately extending and retracting 20 degrees of flaps while flying the approach. Pitch corrections were immediate and perfect.

The system is also capable of flying holds and procedure turns with perfect rollouts every time. Since it knows the precise winds drifting the aircraft it can apply exactly the right correction. This is more a function of the newer G1000 software than the GFC 700, but the autopilot hardware flies the commands of the navigation software as well as we could hope.

The system uses the flight director/autopilot logic thats familiar to pilots of high-performance aircraft, but can be confusing to pilots transitioning from Skyhawks and Archers. Heres a quick review: The flight director is a system that tells the pilot where to fly to stay on course. The pilot can follow the commands of the flight director by handling the yoke and pitching or rolling the airplane to put the

triangular aircraft symbol inside the complementary triangular space under the flight director command bars. (GFC 700 systems in turboprop and jet installations have another flight director style option, the older style two-bar display which looks like the two crosshairs of an ILS.)

Since the flight director gets all the benefits of perfect turn anticipation and course corrections, a pilot following the flight director precisely looks like an ace. You might need to do this just to keep your hand-flying skills up or if a servo were to fail and disable only the autopilot.

The GFC 700s status bar is top center on the primary flight display (PFD) and makes it clear exactly which mode youre in and what to expect. The status bar is actually key to operating the GFC 700 and we commend Garmin for packing so much information into that space-even if the more advanced modes take some training to interpret.

The system has the familiar heading (HDG) and altitude-hold (ALT) modes youd expect. Theres also a familiar vertical speed mode where you can set a vertical speed in hundreds of feet per minute up or down. If an altitude is set on the altitude bug, the system will climb or descend in a vertical mode until capturing that altitude.

New to many light-aircraft pilots is the flight-level change (FLC) mode. The mode pitches the aircraft as needed to hold an airspeed rather than a rate of climb. Maintaining a 1000 FPM climb might result in excessive pitch up in a normally-aspirated aircraft as power declines in the climb. FLC lets you hold Vy or Vcruise as needed all the way to altitude, adjusting the pitch as needed. You can use FLC for

descents, too by setting a speed and reducing the available power. This can be a boon if you must maintain a speed per ATC restrictions or in icing conditions.

The integration of the system really shines in more advanced modes. Navigation (NAV) mode will follow either GPS or VOR/Localizer guidance, although GPS guidance is required for all that fancy flying of turns and holds.

The approach (APR) mode actually looks at the kind of approach you loaded to decide what to do. If you loaded a GPS approach, it will attempt to arm the best vertical glidepath available to help guide you down as well as guide you left and right. If you loaded an ILS, the ILS frequency is automatically tuned and identified. When you intercept, the CDI source switches automatically to the localizer with the glideslope armed.

The status bar or the PFD keeps you in the loop through all of this showing what the autopilot is currently following and what its armed to capture. Dont want the glideslope or GPS glidepath to capture? Just fly the approach is NAV mode. Youll get the same top-notch navigation performance but with no vertical guidance. VOR approaches are flown in APR mode with enhanced sensitivity, but they get a dedicated VAPP annunciation so you know the system is doing the right thing.

Because all this automation can breed confusion in the heat of battle, we love the fact that each button push is really a toggle. If youre in NAV mode and you get

baffled because the system did something unexpected, push NAV again to revert back to ROL mode. This is a step better than simply disengaging the autopilot to work something out.

Other smart bits include overspeed protection, clear cautions and warnings if systems are performing incorrectly and excellent integration with control wheel steering.

The system has even more sophisticated options, but here the waters get muddy. A vertical navigation (VNV) mode in some installations let the autopilot fly an entire sequence of courses and altitudes from an IFR arrival through all the step-downs on an approach. It can even follow combinations of published altitudes retrieved from the database and ATC-assigned altitudes.

This feature rocks-when the multiple criteria needed are met, and you dont arm it too early or miss the cue to accept it, and you remember to set your altitude bug at or below the altitude in your flight plan. There are several annunciations and vertical path cues that arent intuitive, in our view. The system also can get baffled by unplanned changes like a late decision to descend in a hold.

We give Garmin high marks for taking the bold move and making this level of automation available to pilots not flying jets. But you should expect to spend quality time with the manual to master these features and be ready to revert to a simpler navigation mode if the system doesnt do what you expect.

The other item to consider is what happens when components of the G1000 flight deck fail. Because the system is integrated, losing the AHRS in a single-AHRS installation will kill both your pretty PFD attitude display and the autopilot. Lose the MFD when thats the only place you have autopilot controls? The autopilot may still be on and try to capture the last modes you used. But you cant change anything and once you disengage it, youre on your own. This is the seedy underbelly of integration without redundant systems. Its far from a deal-breaker, but its worth considering before you go pony up the extra cash for a new G1000 airplane vs. and late-model used one (see sidebar).

Its worth noting that the system disengages when put into go-around mode. This was done, were told by Garmin, because they wanted to keep the pilot in the loop during the go around to assure that power is added. But this doesnt make much sense, since go around is initiated by pushing a button next to the throttle.

If we have nits to pick, however, theyre more with the G1000 software driving the system rather than the autopilot itself. For example, the annunciation for the kind of GPS approach the system is flying is dead-center on the HSI, but its subtle. Wed like to see something more attention-getting to clearly indicate what guidance the pilot has and what minimums are in play.

Also the enhanced vertical navigation mode of the autopilot makes the flight plan page on the MFD an excellent choice for navigating on arrival and approach. But the moving map on this page lacks any declutter function. Garmin has improved the G1000 flight deck software in some crucial ways from the first flying example and we expect many of the current annoyances will be likewise squashed with future updates.

The end analysis is that the GFC 700 is a standard-setting change in both autopilot performance and cockpit automation capacity. Its hard to imagine a scenario in general aviation flying that the GFC 700 wouldnt be up to with a competent pilot pushing the buttons. And its likely that pilot will be wearing a big fat grin.