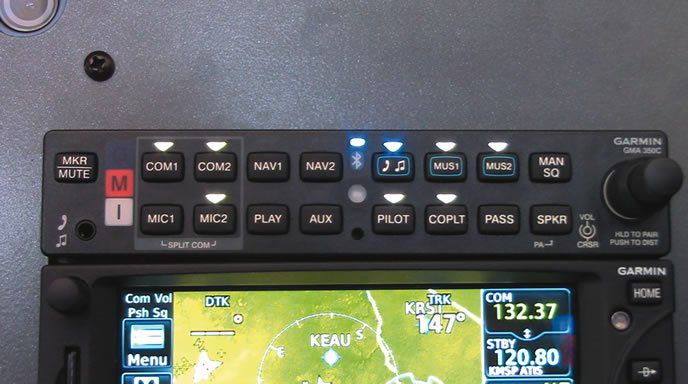 Garmin’s first stab at cabin audio control was the GMA340, an audio panel that wasn’t packed with fancy features, yet it did what a modern audio panel was supposed to do: Provide high-quality intercom and radio audio. Moreover, it had a feature set that didn’t require a PhD to operate.

But the GMA340 replacement—the $2295 GMA350c—takes the user experience to a much higher level. So high, perhaps, that it might be intimidating for users who can barely operate a smartphone.

On the other hand, Garmin says it designed the all-digital GMA350c-series with features that can reduce workload. This includes voice recognition and command for automatically switching comm transmitters, 3D audio for better differentiating multiple audio sources and a wireless interface with the Garmin Pilot tablet app. We went flying with the system in Garmin’s Cirrus for a closer listen.

Kudos to Garmin for making the GMA350c compatible with the GMA340 interface wiring and connectors. Audio installs are time-consuming and can result in sizable amounts of teardown. But installers (and owners writing the check) won’t be entirely off the hook when transitioning to the new panel. It requires replacement of the mounting rack—an easy task in some stacks—but not so much in others, especially one-piece, riveted Mooney stacks, to name one head-shaker. If you already have a non-Bluetooth GMA350, the new “c” model will use the same wiring and mounting rack

If you use stereo headsets, it will be worthwhile to have your installer finally replace the mono audio jacks with stereo jacks, since the GMA350c provides stereo audio. Now more than ever, overall audio quality depends on the quality of the headset and the condition of the wiring.

One trait we liked about the GMA340 was its robust push-button and knob controls, plus decent mode annunciation and the GMA350c maintains the tradition. When a key is selected, a triangular annunciator above the key is illuminated. Annunciator brightness is adjusted automatically by photocell dimming. Key brightness is adjusted by the radio dimming bus control. But that is where the similarities end, although the unit retains a six-place intercom, marker beacons (except on the helicopter version), a cabin speaker function, plus pilot, copilot and passenger intercom isolation. Additionally, the new panel includes a comm clearance recorder and player for 2.5-minute looped audio playback.

Garmin isn’t the first to offer integrated Bluetooth. It was PS Engineering that brought the feature to its line of audio panels a couple of years ago. If you listen to music in the cabin, you’ll wonder how you dealt with cabled music input. If not, you’ll likely wonder what the hype is all about. In the GMA350c, it’s more than just streaming tunes.

With connectivity to an iOS or Android tablet or smartphone running Garmin’s Pilot navigation app, the GMA350c receives terrain and traffic warnings directly from the tablet. Additionally, three wired aux inputs are available for other device inputs. This could be a landing gear warning system, engine monitor or other attention-getting alerts.

Garmin refers to the panel’s Bluetooth telephone and entertainment distribution as Blue-Select mode, which is entered by pressing the small rotary volume knob. Once pressed, the annunciator over the telephone/music symbol key flashes blue. Additionally, any combination of the annunciators over the Pilot, Copilot and Pass buttons may be blue, indicating whether the pilot, copilot or passengers are also receiving the Bluetooth audio source. Since the panel can accept dual music inputs (actually, three, if you include the 3.5-mm wired stereo input on the front bezel), you might utilize one input for streaming wireless music from the smartphone and the second input from a remote wired SiriusXM receiver, for example. A dedicated Bluetooth annunciator indicates when the panel is paired with a device and will remember it between power cycles.

When paired with a telephone, the panel offers full duplex communications. If the Bluetooth connection is supporting a phone call, all intercom positions listening to that source can also speak on the call through the headset. Using a telephone with the system is seamless. Need to call for your clearance? Establish a Bluetooth connection with the phone and communicate over the headset.

The panel has a configurable muting feature for both telephone and music audio when comm chatter is present by pressing and holding the Music or Blue-Select key. Should the audio panel have a power or hardware failure, a failsafe mode automatically connects it to the primary comm transceiver, but the cabin speaker will be inoperative.

Telligence is Garmin’s buzz name for voice recognition, allowing the user to control many of the functions using spoken commands. Voice recognition is activated by pushing and holding the pilot or copilot push-to-talk switch while speaking a command. When the switch is released, the panel responds to the command.

Perhaps the most common use for Telligence is toggling the transmit select mode from one comm radio to another, in the case of a frequency handoff, as an example. Push the switch and say “comm one,” and the audio panel automatically toggles comm one as the active transmitter, eliminating the need to reach up and hit the button on the bezel. Other recognized commands include “aux” for enabling auxiliary audio input, “telephone” for activating the telephone audio input and “music,” for enabling or disabling music input.

A function carried over from the non-Bluetooth GMA350 is 3D audio, which uses digital audio processing to locate the inputs to the headset. Think of it as audio spatial dimension, or the processing of the audio more closely to how the human ear naturally responds to directional audio sources. It’s an electronic illusion, really, with the panel artificially delivering audio sources as if they were coming from a unique location in the cabin or specific seat position.

Consider monitoring multiple audio sources—perhaps comm one and comm two—while also listening to passenger intercom chatter. With 3D processing, comm radio one will seem to come from the front left and comm two will come from the right, coinciding the way both comm radios are separated in the radio stack or on the instrument panel, in most configurations. Intercom audio is also separated relative to where each individual sits. By default, the system assumes the pilot is in the left seat and the copilot is in the right. Only have a single comm radio? Its audio will be processed so it’s heard in the 12 o’clock position.

To fully benefit from 3D audio, you’ll need stereo headsets. If not, you’ll still hear all of the audio sources, but without spatial separation.

If 3D audio proves to be too much (we think it takes some getting used to), it can be turned on and off by toggling the Pilot function key.

On a side note, we give PS Engineering’s PMA450 a slight edge when it comes to configuring what it calls Dimensional Sound Intelli Audio. That audio panel has a digital display with an onscreen visual setup mode so you can manually configure the position of the comm radios to your liking. It doesn’t, however, spatially orient passenger intercom audio. We covered the PMA450 in the September 2014 issue of Aviation Consumer.

Of all the fancy features available on the GMA350c, the one we like best is the ability to manually adjust the intercom squelch level. While the system has automatic squelch—which proved to be accurate in the Cirrus we flew—there might be plenty of times when adjustment can come in handy (when mixing different brands of headsets, for soft voices which may not break the squelch and for loud cabins, to name a few situations).

A dedicated manual squelch key takes the unit out of the default autosquelch mode, while the volume/cursor knob controls squelch adjustment. You can also separately adjust the intercom volume for pilot, copilot and passengers by cursoring over the Pilot, Copilot and Passenger function key and then turning the volume knob. There is a even a volume adjustment for the music input, aux input, cabin speaker and marker beacon signal.

In split-comm mode, both the pilot and the copilot can transmit simultaneously over separate radios. When in split-comm mode, the pilot transmits on comm one and the copilot on comm two. As with other systems with this split mode, performance is heavily dependant on the configuration of the comm antennas and the separation of the tuned frequencies.

Our experience has proven that split comm functionality works the best when one antenna is on the top of the aircraft and the other is on the bottom. If not, expect interference or bleed-over from one transmission to the other.

If you have Garmin’s latest VIRB X-series action camera, the GMA350c will wirelessly connect to it for piping in intercom and comm audio over the video recording. With this configuration, no more dealing with cables and impedance mismatches with external camera inputs.

Overall, we think Garmin got it right with its next-generation audio panel, although we think it will be over-featured for buyers looking for basic functionality. But isn’t that the case with most avionics these days?