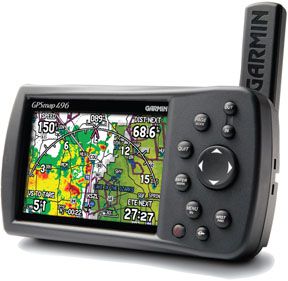 We think the marketing conference rooms of most big companies ought to be like Level 4 Biohazard labs. The idea is to maintain just enough negative pressure so that the good ideas have to fight their way out and the profoundly ridiculous ones never make it outside to wreak havoc on the unsuspecting public. Garmin seems to have figured this out, especially with regard to product cycles and the delicate task of pricing things just a buck or two short of way the hell too much.

The just-released Garmin GPSmap 496 could make a Wharton Business School case study of this phenomenon. At first blush, $2995 or $2795 on the street-yes, thats right-seems like an insanely high price for a portable, but when you examine the 496s added features over its progenitor, the GPSMap396, you soon slip into the three stages of MasterCard surrender: Stage One: Thats stupid expensive. Stage Two: Well, on second thought, maybe its not that bad. Stage Three: Hey, this is a deal; Id better buy it before they raise the price. Just be warned that Garmin knows how this mind game works.

Well bottom line it for you: The GPSmap 496 upstages a very good product-the GPSMap 396-that has only a year of market history. It costs about $600 more than the recently discounted 396 and, in our view, its improved features deliver about that much more value. And that aint no accident. As we said, Garmin didnt get to be a billion dollar company by not understanding this.

New, Improved
When we reviewed the GPSMap 396 a year ago, we more or less drooled all over it. It was and is a great product, combining terrific GPS navigation capability with both XM Radio-based datalink weather from WxWorx, XM entertainment radio, an impressive flight panel page and terrain warning features little shy of a full-up TAWs system. We had no significant complaints about it, other than a couple of minor lock-ups. The GPSmap 496 had a lock-up, too, by the way, also insignificant.

Some buyers complained about the powerful magnet Garmin placed in the base of the XM antenna shipped with the 396 a year ago, which would disturb a magnetic compass if placed too close to it. All right, fine, if you want to buy a $2300 GPS and still wring your hands over a wet compass, the magnet is a bad thing. Conceded. Garmin conceded it, too, and the 496 package has no magnet in the base. Acolytes of pre-Columbian navigation the world over may now rejoice.

So, then, what justifies the higher price of the GPSmap 496? Incrementally better performance, mainly, thanks to an improved GPS refresh rate (5 Hz versus 1 Hz) and a high-resolution 256-color display at 480 by 320 pixels. Side-by-side with the 396, this results in a noticeable, if not dramatic, improvement in screen response and refresh rate, especially on the flight panel page. In our trials, the 496 screen appeared noticeably brighter, too, but Garmin says its not really. The higher terrain resolution just makes it look that way.

The 496 sports far more data than the 396 has, specifically AOPAs Airport Directory information-if not every bit of it, most of it-and terrain resolution thats three times greater than the 396. That means when the screen draws terrain detail, the usual low-res blockiness is replaced by an image that looks more like a photograph. Zooming in on the detail does result in some pixilation, but overall, the terrain picture is smoother, crisper and easier to interpret.

The AOPA directory material is accessible under its own information tab for any selected airport. It contains the usual stuff, such as runway information, approaches, frequencies, fuel availability, services and so on. If you wanted to leave the big paper directory at home instead of schlepping it around in your flightbag, the 496 will fill in. We did find, however, that the smallish text for the AOPA data can be difficult to read and there appears to be no way to adjust the text size.

Taxi Help
Although the 496 doesnt include approach plates-stand by for that in the 596, probably-it comes close. Using base airport data, Garmin has developed a product it calls SafeTaxi airport diagrams. These show runways, taxiways, hangars and known obstacles and facilities and theyre geo-referenced so you can continuously see the airplanes position relative to ground features. These diagrams-available for 650 airports, with more planned-are updated at the same frequency as is the terrain database.

We found that they are helpful, but the 496s screen is small, so to read the fine detail and then see the big picture-say where the FBO is, or the next taxiway turn-may require toggling the scale keys. We wouldnt call it a hassle, exactly, but the effort expended will keep you from a runway incursion or missing a taxiway in the fog. But its not the same as following along on an in-panel MFD.

For approach navigation, the 496 contains the standard limited approach fixes Garmin has offered since the GPS 195 appeared in 1996. As with the GNS430/530, these are set up in the flightplan mode and appear as white or magenta lines, depending on course progress. One quirk we noticed-carried over previous portables-is that if you intercept the final course inside the FAF, the navigator references distance from the FAF rather than the runway, which is confusing. This is, of course, a carry over from TSOd IFR GPS and is simply the way things work.

Special use airspace is depicted as usual, with some enhancements, including something Garmin calls Smart Airspace. It works like this: If airspace ahead is near your present altitude, it illuminates as a heavy, solid line, otherwise it appear s as a lighter line. Further, the fact that WxWorx subscribers also get up-to-the-minute updates on TFRs means that youd have to be a moron to bust airspace with this navigator. (Maybe it needs a tab labeled “But I really want to lose my license.”)

And speaking of XM-based weather, the 496 has it and the service is available from WxWorx in a two-tiered pricing plan. For $29.99 a month, you get basic NEXRAD, METARs, TAFs and TFRs and for $49.99 a month, you get an additional palette of text products such as satellite views, echo tops and winds aloft. Another $12.95 buys the entertainment service, but XM offers a price break if youve already got one subscription. The weather functionality is the same in both the 396 and the 496, but we noticed in running the two together that the 496 definitely refreshes and repaints new weather faster.

The faster refresh rate is most noticeable on the GPS-driven flight instrument page, which mimics a primary flight display based entirely on GPS-derived rate data. On the 396, for example, the turn coordinator and heading indicator sort of clicks through the changes when the aircraft rolls. On the 496, the movement is clearly more fluid; its more, “wow, look at that,” than “holy %$#@!” But clearly, some clever Garmin engineer spent some hours at the computer figuring that out, were sure.

Accessories
While precious little Apple iPODs are shipped in pretentious jewel cases, portable GPS usually comes in big boxes and the 496 is shipped in a steamer trunk. And therein lies the additional value. The GPSmap 496 is sold standard with the automotive mapping package, including a nicely designed beanbag mount, power cord and speaker and the necessary cabling to keep the road-and the aviation-data fully current. The road data is pre-loaded in the 496. If you bought a new GPSmap 396 and then added all those options, youd spend $250 of the $600 price Delta between the 396 and the 496. Further, if you use the 496 in the car and dont have XM audio now, youre saving the cost of an XM Radio receiver, another $50 to $150, depending on the model.

So the additional $300 to $400 is the incremental value of the faster screen, the AOPA database, the taxi diagrams and the airspace features. In our view, thats more capability for not much more money. In other words, it seems valued about right.

The Garmin hardware is robust and well designed. Garmin has finally figured out a yoke mount that doesnt deserve to be smashed with a ball peen hammer and the combined GPS/XM antenna/receiver is a nice little puck that can be tucked away anywhere on the glareshield, even near the mag compass, if you obsess about that sort of thing.

In the car, the beanbag dash mount keeps the thing from sliding around when youre cornering and the power cable and combined speaker work as intended. The XM Radio sounds cheesy over the speaker, but its not intended for that purpose. Plug in a stereo headset or, in the airplane, wire it into the audio panel and it sounds as good as any in-panel stereo system available.

Conclusion
Does the foregoing mean the GPSmap 496 is a slam dunk against the 396? Not really, in our view. If you dont want the auto navigation stuff and know you wont use it-say, as we do, you already have a dedicated ground navigator-then why pay extra for something you dont want? If all you want is a good GPS navigator and the least expensive route to datalink weather, the GPSmap 396 is as good as it ever was and for $20 a month, NEXRAD is a must have.

In anticipation of the 496 introduction, the 396s price was reduced and there are good deals on used ones, as owners who want cutting edge products trade in or sell their old 396s. We saw them selling at Oshkosh for about $1800. But if the auto mapping appeals, the GPSMap 496 represents an excellent value, in our view. It costs more, but it also does more commensurate with its higher price.