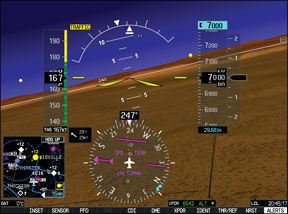 Around 1997, BF Goodrichs Skywatch TAS brought high-performance, active traffic interrogation to light aircraft. It was an accurate and reliable system that remains in the L-3 Avionics Systems product line today. Honeywell also has a proven TAS system and Avidynes affordable TAS600, which started life as the Ryan 9900 series, has been a lively seller and good performer.

Now Garmin has a fresh TAS system of its own with the GTS800-series. Its available in three versions: The low-cost GTS800, mid-range GTS820 and flagship GTS850. The attention getter is the ability to display ADS-B traffic targets on

Is ADS-B an important functionality for future TAS systems? We think so. Avidyne has announced an ADS-B upgrade for their brisk-selling TAS-600. The Garmin GTS800-series system is currently undergoing certification and availability is expected by years end. Its engineered for sizeable growth potential as the FAA finalizes its ADS-B mandate.

The last thing most airplanes need is more remote boxes and more antennas. Matters are worse with TAS system antennas, since reliable performance is hugely reliant on noise-free placement of the antennas on the airframe. In a standard configuration, Garmin uses a top-mounted GA58 directional L-band antenna for the entry-level GTS800 and mid-range GTS820 processors. This is a twin-blade antenna that stands roughly three inches high and 5.6 inches wide. Garmin engineers call it the “napkin holder” because, well, thats what it resembles.

Dual antennas have proven superior performers on Avidynes TAS system in our experience and we recommend this option on Garmins system, too. Weve flown enough of single- and dual-antenna TAS systems to know that dual antennas offer far greater performance. Were also aware of the increased complexity and costs for installation. See the sidebar for some pricey facts. For composite aircraft, the

usual concerns and extra effort of fabricating a big and beefy ground plane come into play. This adds to installation costs and is the price to pay for retrofitting modern composites like the Cirrus, Columbia and others.

The GTS800 (the entry-level system) has a 12-mile surveillance range. On the GTS820 and 850 systems, an amplifier expands that to 40 miles. All of the GTS systems require a separate display to show traffic targets. The entire range of Garmin displays will work, including overlay on SVT-equipped PFDs. When interrogating Mode S targets, appropriate displays will be able to depict flight ID, range, bearing, and course trend vectors.

The GPA65 remote traffic processor, which Garmin calls an LRU for Line Replaceable Unit, weighs roughly 10.5 pounds and can be mounted wherever theres room for another remote box. Its nearly 15 inches deep, so it can eat space. Theres the option of mounting the LRU either vertically or horizontally in the mounting rack, which was a thoughtful touch on Garmins part. The systems will operate at either 14 or 28 volts.

The Garmin GTS is a hybrid surveillance system utilizing both active and passive surveillance technique. Its different from other TAS products in that it was actually engineered with high-end TCAS II specific surveillance properties. Garmin calls their new traffic technology CLEAR CAS (Correlated Location Enhanced ADS-B Receiver Collision Avoidance System), creating a 360-degree detection zone around the host aircraft. It offers a 50-foot accuracy, thanks in part to the directional L-Band antenna.

The 40-watt transmitter in the base GTS800 is low power, but Garmin says its well suited for most light airplanes and helicopters. It has selectable display range of two, six or 12 miles. All models have the ability for expanded audio callouts of “Traffic, one oclock, low,” for example. We grew to appreciate automated callouts during a recent game of cat-and-mouse flying directly above a maneuvering helicopter. It popped on and off the screen as a dreaded yellow traffic alert. But the audio callouts put our eyes back on the traffic in short order. This functionality is standard in the Avidyne TAS600 and L-3 Skywatch, too.

The GTS820 and 850, with 250 watts of transmitter power, offer 40 nautical miles of surveillance range with expanded 24- and 40-mile display scaling. All systems have the ability to display up to 30 traffic targets (dependent on the display used) and all systems will operate up to FL550. While Garmin recommends the GTS820 for faster and higher performance aircraft, it doesnt limit any of the systems to any particular class of airplane as Avidyne does with their systems.

Heading synchronization is fed to the GTS system from the G1000, G500/600 AHARS systems, or oldfashioned, three-wire analog synchro from the gyro in a Bendix/King KCS55A HSI system. This heading input keeps the traffic in the right place at the right time and is another system to tap into during the installation effort. Theres also the option of analog radar altimeter input, for feeding the system altitude data during an approach.

There has been wide speculation if not confusion surrounding the actual ADS-B functionality of these GTS TAS systems. Part of the problem is that the standards arent yet fully defined. Garmin told us they can and will revise the systems operating software as well as the hardware, if necessary, to offer a seamless integration into future ADS-B operability, but theres no commitment on what that will entail or cost.

In its current configuration, the GTS systems can display ADS-B traffic if they get the signal directly from another ADS-B-equipped aircraft that is using the 1090 Mhz ADS-B link. As it turns out, the odds of that are pretty low (see sidebar, left). In order to reliably display the ADS-B traffic, the GTS must be connected to either a GTX330ES transponder or a Universal Access Transceiver (UAT) such as the Garmin GDL 90.

A brief review: The GTX330ES is a version of Garmins hugely popular GTX330 Mode S transponder that allows for TIS traffic. The ES stands for “Extended Squitter, an ADS-B output format that can carry position, velocity and aircraft information when connected to an appropriate on-board GPS receiver. Existing GTX330 units can be upgraded to the ES version for around $1200.

Having ADS-B traffic is more than a small bonus. Active traffic systems are good at getting the distance to a potential threat, but not so good on exact bearings. ADS-B is nearly perfect on both. Also, all active traffic systems increase the rate at which they interrogate other aircraft based on the threat, low for distant aircraft and fast for nearby ones. The transponder frequencies are crowded already, so a fast rate can actually have the unwanted affect of clogging the frequency and reducing accuracy. Combined systems resolve that the same target is on active TAS and ADS-B and just use the more accurate ADS-B data and keep a low transponder interrogation rate.

The GTX330ES, plus a GTS system, will give you ADS-B traffic, but not necessarily any other ADS-B services. Were told it will show you future traffic targets, such as ground vehicles. The GDL90 UAT also plays with the GTS systems and will give you the full range of ADS-B services. But that installation could run every bit of $9000, which is a hefty price to pay for a standard thats still subject to change and a benefit thats yet to be realized. And, no, you cant display both GTS and TIS traffic, even if you have the Mode S transponder.

These big numbers arent unfamiliar in the world of active TAS systems and most owners will boast of high-cost TAS reliability. One new Cirrus owner, flying for the first time with active traffic, was amazed at the number of traffic targets he previously missed with the TIS system installed in his old airplane.

We still think its early to drop serious coin on any ADS-B technology and the new Garmin technology is no exception. However, Garmins new GTS TAS systems are engineered with the latest and greatest squitter and frequency efficiency coupled with the intelligent design of some borrowed TCAS II technology. They are competitive based on their TAS alone. And if buying technology today you hope will play well with the ADS-B of tomorrow is a gamble, then the Garmin solution probably has the best odds to date.