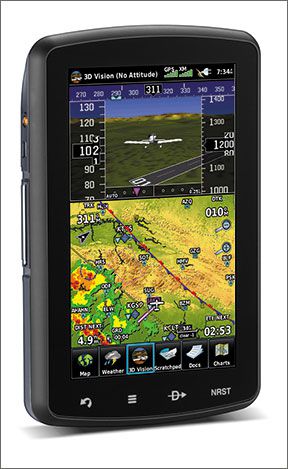 The way we see it, portable and affordable ADS-B receivers are threatening—if not putting a sizable dent—in the once-dominant satellite broadcast weather market.

Even though the FAA’s free, ground-based FIS-B weather information stream isn’t exactly a match for XMWX products, many users we talk with are tired of paying the increasing costs of XM subscriptions. With pricing options that range from $35 to $100 per month, it’s easy to see the appeal of free ADS-B weather if you can accept some compromises, including the lack of reception while on the ground and the lower resolution of FIS-B radar.

More bandwidth
The merging of Sirius Satellite Radio and XM Radio afforded a higher broadcast bandwidth because the new SiriusXM has two sets of satellites to work with. This expanded bandwidth increases the broadcast capacity of the system, enabling SiriusXM to deliver more entertainment channels (150 channels, up from 135), plus expanded aviation weather. That’s good news for new subscribers, but a letdown for existing customers with older weather receivers because the older hardware isn’t compatible with the new broadcast format.

There are a lot of early-gen receivers out there, partly because Garmin saturated the market with the GXM-series. That’s the hockey puck-like portable receiver module that plugs into XM-compatible portable GPS units.

Garmin’s portable XM interface came to the market back in 2002 as a standard accessory to the GPSMAP396 and continues with the current aera796 portable. The GPSMAP696 and aera500-series touchscreen GPS also work with the older GXM40 XM receiver. Then there’s the GDL69—the permanently mounted XM receiver that interfaces with Garmin panel displays.

Don’t throw your old receiver away—yet. While the GXM40 and GDL69 aren’t compatible with the new SiriusXM signal format, these older receivers will continue to work with the older XMWX data stream, at least for the foreseeable future, although SiriusXM wouldn’t give us a definitive timeframe for continued compatibility.
The company told us the new receiver won’t receive the old data stream, but made it clear that older receivers and subscriptions continue to work, despite rumors that the company has abandoned the old data stream in favor of the newer signal.

The GXM42 next generation receiver shares the same footprint and connectivity as the older receiver and has a list price of $599. The fee to activate the receiver is reduced to $25 and SiriusXM is offering a $300 rebate for new purchases with a qualifying subscription.

In a world where Bluetooth connectivity is the norm rather than the exception, we wish the new receiver was available in a wireless version, especially since the aera796 has Bluetooth capability. Instead, it connects with the aera796 with a mini USB cable. You’ll want to mount the receiver on top of the glare shield so it has an unobstructed view of the sky. This means a wire draped over the panel, unless you can drill a hole and run the wire under the panel.

We attempted to contact WSI to get more information on the weather packages and specific details on its weather products, but multiple calls to several people in WSI’s aviation division were unreturned before we went to press. When we asked SiriusXM’s Craig Correa about the new data, he said that “weather presentations can vary by product and sometimes between models from the same brand.”

For example, what’s called SCIT attributes (storm cell identification and tracking) in the XMWX product is now named storm cell attributes in the new SiriusXM Aviation lineup. Both products contain specific information about a storm cell, including speed and direction, but they’re just named differently. What is different is that SiriusXM Aviation bundles more products together.

For instance, in addition to high-resolution radar images, the new SiriusXM’s $34.99 Pilot Express base subscription package includes cloud-to-cloud and cloud-to-ground lightning data. Under the package delivered by Baron Services, light-