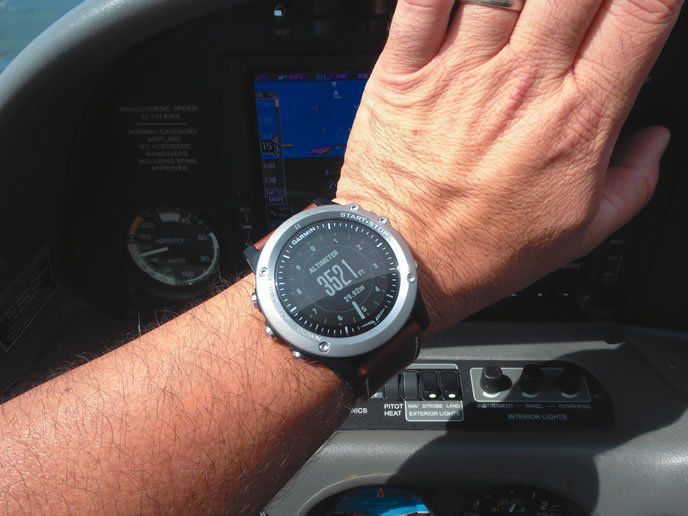 With stiff competition in the sports wearable and action cam market, Garmin is wasting no time rolling out second-generation products aimed at the market it owns: aviation.

This month, the company unveiled its improved D2 aviator watch and a redesigned HD action camera—the VIRB X-series. Here is a field report of both.

We thought Garmin’s first-gen D2 watch was a yawner in the cockpit, although it worked well as a sports watch since it was born from the company’s Forerunner cachet. But the first-gen D2 lacked the poshness of a Breitling or TAG Heuer, dressed down in utilitarian form. Of course, it costs far less and there’s nothing wrong with utility over style. But, the new D2 Bravo steps it up a few levels in both styling and function.

A redesigned stainless steel bezel, domed sapphire lens and a hefty leather band give the $699 D2 Bravo a look and feel that means business.

The previous D2 had decent battery life and the D2 Bravo is better, ticking (electronically) for six weeks in normal watch mode and 20 hours in GPS mode. Its redesigned EXO GPS WAAS antenna makes for a smaller footprint and quicker position lock-on than the older watch.

The Bravo’s function display is total electronic, with a high-resolution color screen and LED backlighting. We flew with it in a sun-splashed cockpit and found it easy to read at a glance, plus it’s an easier read than a Pebble, in our view. Its feature set and menu structure is relatively shallow and main controls are limited to five function keys—three on the left and two on the right—side of the bezel. We like the Bravo’s display of Zulu/UTC time because it is, after all, a wrist watch.

The Bravo has a worldwide aviation database for straightforward direct-to and nearest airport navigation. Hold the upper left function button and a list of nearest airports appears. Once you select the airport as the destination, the display shows an electronic HSI in relation to GPS track data, plus distance to the destination, in addition to a bearing marker on an electronic track display. You can also select a basic moving map display. A bit much for the pilot who also has a ton of navigation data on a tablet computer, and perhaps on the instrument panel? Maybe, but not a bad tool for backup, in our view.

The Bravo has an altitude alerting function, which is accessed on the devices altimeter page. It allows you to select a target altitude vibration alert when reaching it, based on pressure altitude. Barometric pressure can be manually set to better the accuracy of the sensor. Additionally, the Bravo watch provides vibrating alerts in 30-minute intervals to notify you when cabin pressure is at or above 12,500 feet.

wireless CONNECTIVITY Inside the Bravo lives a capable sports watch (it comes with an interchangeable sports band), and like other devices in Garmin’s wearable line has full wireless connectivity with ANT+ sensors. This includes a heart rate monitor and bicycle cadence sensors. It also has a dedicated swimming, skiing and snowboarding mode, plus it’s compatible with the HRM-Run accessory for full running dynamics.

It also has wireless Bluetooth connectivity—integral to receiving textual weather from Garmin’s Pilot app running on an iPad or Android tablet. METARs are color-coded and displayed in plain language format, but don’t expect radar graphics—the display is too small, anyway.

Connectivity with the smartphone also enables email and text notifications, a function we have learned to appreciate with Garmin’s new Forerunner sports watch.

That was our first impression while pawing the new VIRB XE camera. One of the traits we liked most about the first-gen VIRB (Garmin still sells the original VIRB Elite, for now) is the large record start/stop slide switch. The new X has a thumb switch, which works well when not controlling the action from a smartphone.

The new VIRB X-series has a footprint which is more GoPro Hero-like. It measures 3.0 by 1.6 by 1.4 inches and weighs 5.36 ounces. No protective case is required. Its naked chassis is waterproof to 50 meters. Like the older Elite, the new X uses a microSD card. It (and the lithium-ion battery) is accessed by unlatching a door on the front of the device. Battery endurance is good, at around two hours. We’re not thrilled with how the device connects to the charging cable. A small cradle snaps to the side of the camera’s chassis. If the pins on the cradle don’t line up perfectly with the pins on the camera, the battery won’t charge properly. A mini-USB plug-in would be easier, in our view.

The VIRB is available in three models (in addition to the early-gen Elite): the $299 X and $399 XE, differing partly by variable video resolution capability.

For example, the wide-angle-shooting XE can shoot 1440p at 30 frames per second and has a 12 megapixel still camera. The VIRB X is limited to 1080p at 30 frames per second. Additionally, the VIRB XE has a Pro Mode with more advanced manual camera adjustments, including white balance control, sharpness control, color profile control, ISO limit and exposure bias. There is also a “tall mode,” which captures a large vertical viewing area using a 4:3 aspect ratio. The video capture at the lower left is an example. The VIRB X-series records video in mp4 format and photos in jpeg.

For capturing audio, the VIRB X-series has an internal microphone, but Garmin’s $40 optional three-to-one combo cable includes a 3.5mm stereo input for an external microphone input, RCA composite video output and a mini-USB port, which we didn’t try. The audio we captured in a variety of settings—including mounting it under the wing of a Piper and on the fuel tank of a motorcycle—was quite good. It cancelled wind noise far better than our Hero4. Garmin is working on a future expansion which will wirelessly connect it to Bluetooth headphones and to Garmin’s new GMA350C audio panel.

The VIRB X has only four bezel controls, including a menu and power key which also function as arrow keys for scrolling through menus. And that menu structure is refreshingly shallow, with easy-to-read status bar icons and straightforward settings for video resolution, field of view, memory card space, battery level and the status of any external sensors. The cam has a top-mounted trigger switch to start video recording and the switch houses a shutter button for still shots. You can set the camera to begin recording video automatically when it’s moving, which saves space on the memory card.

To our disappointment, the VIRB’s LCD display doesn’t have a video/photo view finder. Instead, you’ll need to use Garmin’s Pilot app. The dedicated VIRB mobile smartphone app has a monitor (and also controls the cam), which worked flawlessly on our iPhone, although it lacks live streaming.

The smartphone connects to the camera via Wi-Fi and it never lost connection when the camera was mounted outside of the aircraft. Garmin sells a remote control for $50. It works from 10 meters away.

The new VIRB X-series has built-in GPS, G-force and orientation sensors and can also connect with a variety of Garmin’s ANT+ external sensors. When editing the playback video with the VIRB Edit software, you have the option of adding G-Metrix gauges, graphs and other data that shows real-time speed, altitude, track, heart rate, bicycle cadence and a variety of other activity-specific information. For flying, G-Metrix can be useful in a training environment. We took the VIRB XE flying on a gusty day—mounted under the wing—and seized the opportunity to bang out a few crosswind landings. With G-Metrix data added to the playback, it was easy to see which approach and touchdown speeds worked the best—and worst.

The VIRB X-series records video in mp4 and photos in jpeg format. If given the choice, we would spend the extra $100 for the XE model, given the stunning video quality of the 1440-pixel resolution.

What impressed us the most is the new VIRB’s ease of operation, build quality and battery endurance. As a bonus, it works with GoPro mounting hardware. Our only nit is its missing viewfinder and lack of live streaming on the app. We think many buyers will want it. Contact www.garmin.com, 800-800-1020.